Pitchfork, home of the decimalisation of music reviews, have decided to pitch their festival fork in London for the first time following events in Chicago and Paris, and whilst gigs are spread across the capital, tonight it is in a church, in a back street off Stoke Newington High Street, in Dalston.

Someone once said don’t go back to Dalston (I’ve done that one before) but after frequenting the Shacklewell Arms a few months ago, alas I must.

Bizarrely my last gig was in a Cathedral so I am coming down ecclesiastically. Maybe next time it’ll be a crypt.

There are three acts on tonight but I am only interested in the first band on the bill; Atlanta, Georgia’s Lowertown. This is in fact their first ever London gig and coincided or was the result of them returning to the scene of the recording of their stunning EP released this year, The Gapping Mouth, to record their debut LP.

Having to perform to a congregation of pews several feet away from the stage must have appeared a bit alien to a band that seem more suited to the intimate with the crowd close enough to touch. That may have dictated the setlist as there was an acoustic guitar propped up but left untouched, and therefore may well have been utilised for the title track of the EP, which is the only disappointment tonight, as it is one of the best songs of the year. They also omit latest single ‘Burn on my Own’ which only amplifies how strong their discography already is.

They open with the lead single from last years EP Honeycomb, Bedbug, ‘Best Person You Know’ which they merge into the only track from their debut EP Friends, ‘Gerald’,  giving it extra beef compared to the very DIY lo-fi recorded version. 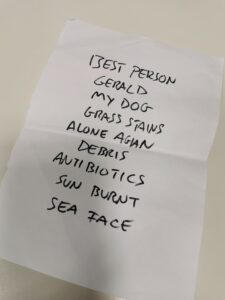 Lowertown give the impression that these songs, specifically the newest EP, are poetry that has the music set to it later, as cadences are ignored but not to it’s detriment and only adds to the emotional pull of a stream of consciousness, in the hands of Olivia, it is beguiling.

The church is an amusing juxtaposition, it feels incongruous for many reasons but they strangely fit there, like they are in a scene from the movie Dogma, Alanis Morissette is going to appear from behind a pillar playing God.

An unexpected surprise was the debut of a brand new song that they may well be laying down in their recording sessions here, ‘Anti-biotic’, which slipped in seamlessly alongside the EP tracks.

The combination of Avsha and Olivia’s guitars are powerful and whilst her vocals were lost in the mix occasionally when they were both in full flow, final track ‘Seaface’ showcased Olivia’s stirring voice, and her charisma as the focal point of the band.

The future is exciting for Lowertown, with an LP looking imminent in the new year, this should be the first of many London gigs. Now, where’s there a nice small crypt for hire?