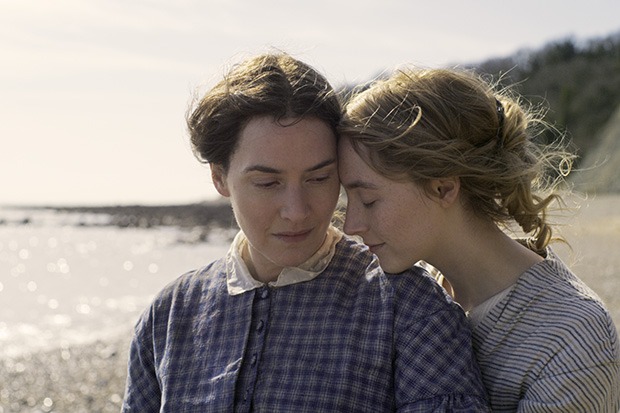 When it comes to same-sex love stories, Francis Lee’s starkly beautiful God’s Own Country ranks as one of the best. The characters ring true, their connection is palpable and the director refuses to condemn them to loneliness i.e. the usual fate of gay men in cinema. He shows similar compassion to the women of Ammonite, a compelling yet painfully austere romance set in 1840s England. Our lovers are awarded a modicum of happiness — albeit one constrained by society and their own trauma.

Much like Josephine Decker’s Shirley reimagines the life of horror writer Shirley Jackson, Ammonite is a fictionalized biopic about long-forgotten fossil hunter Mary Anning. There is no evidence that she was a lesbian, let alone pursued a secret romance with a married woman, but the possibility is plausible. After all, Mary was a trailblazer who refused to abide by the rules of gender. While most of her contemporaries were doing needlework, she was traipsing about in mud, uncovering fossils on the unforgiving shores of Lyme Regis.

In Lee’s version of her life, Mary is an emotionally-shutdown loner. With her work under-acknowledged by men of science, she has been reduced to collecting shells for tourists as a means of looking after her ailing mother. Mary’s world is turned upside down when a rich gentleman turns up at her shop and asks for a guided tour of the area. He is something of a fan boy and she is too broke to refuse. It goes terribly, but then Mr. Murchison isn’t having much luck in general given that his wife is caught in the grips of “melancholia.”

The beleaguered gent comes up with the (a little too convenient) idea of leaving Mrs. Murchison with Mary while he continues his trip. Again, the fossil hunter is too poor to say no, but she resents the imposition. However, proximity has a powerful way of lowering defenses. Mary begins to thaw out emotionally and the much-younger Charlotte blossoms under her care. A romance ensues and both women muster the courage to hope for more from life. Their bubble threatens to burst, unfortunately, when Mr. Murchison announces his imminent return.

As Mary, Kate Winslet turns in one of her best performances. She gives the impression of being mean and cynical, but the occasional lingering glance betrays her real emotions. Saoirse Ronan is equally impressive as Charlotte. In her hands, the character is prim and proper, but also wild and willful. Together, they share chemistry, but not the kind needed to fully invest in their happiness. Despite two nuanced lead performances and a couple of explicit sex scenes, this romance never really catches fire.

It also doesn’t help that Ammonite shares so many similarities with Céline Sciamma’s superior Portrait Of A Lady On Fire. While that film bustles with poetry, passion and art, Ammonite takes a very different approach. Lee’s film captures small moments of bliss surrounded by repression and despair. It might be an accurate portrayal of the 19th century life, but Ammonite isn’t the emotional body blow it should be. That being said, there is still a lot to admire about a film that shines a light on a forgotten and much-deserving heroine.