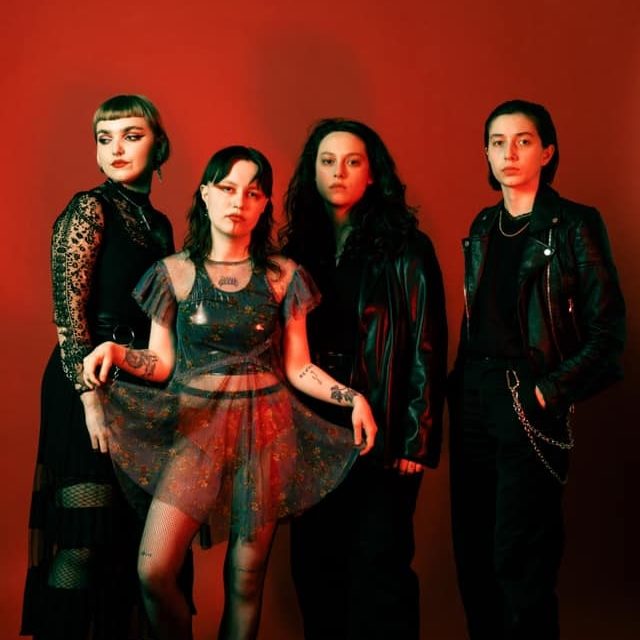 Manchester’s Witch Fever have released their debut EP Reincarnate via Sony’s Music For Nations.  The band’s name is inspired by the hysteria which accompanied the witch trials in Salem, Massachusetts, and Europe which the band have long considered were a means to belittle, suppress and diminish women.   Indeed it is this emphasis on female empowerment, female anger, and not being held back that provides the inspiration for Witch Fever.

The 6-track EP opens with singles ‘Reincarnate‘ and ‘In The Resurrect‘.  Witch Fever deliver their empowerment and independence messages through a no filter blast of heavy rock.   The scuzzy guitars and full on assault of the drums produce a ferocious sound which gets the adrenalin pumping.

“It’s important for us to do things our own way and represent ourselves as we wish, regardless of outside opinion,” states drummer Annabelle Joyce. “We represent an honest voice about breaking out of the indoctrination in our society and all oppressive institutions.”

Witch Fever are not afraid to tackle difficult subjects and in ‘Abject’ they deal with sexism which the band have encountered during live shows.  Current single ‘In Birth’ is based on lead singer Amy Walpole’s experiences growing up in a Charismatic Christian church.  It looks at rejecting the norm and instead focuses on finding your own path and your own voice.  Your body is your own and you have ownership of it, no-one else.

The lyrics of ‘Initiation’ allude to an act of assault “Your blood got on my clothes and I’m 12 years old and I’m waiting for that tender touch”.  Amy’s vocals are full of anger, emotion and passion.  There is a menace in the heavy sonic landscape as befits such dark subject matter.  ‘Inititation‘ is about fighting back and not being a victim but instead placing the blame were it firmly belongs.

Closer ‘Bully Boy’ is a ferocious response to the abuse of male power.  Its a 4 and a half minute assault on the senses and is visceral in its impact and completely unforgiving of those who conduct themselves in this way.   To finish the EP with such a powerful statement of intent, of retaining your individuality and standing firm in the face of adversity provides strength and emboldens those listening.   “There’s something about playing heavier music that feels so empowering,” says guitarist Alisha Yarwood. “We all have completely different music tastes and inspirations, but that’s what makes our sound so unique.”  Bassist and backing vocalist Alex Thompson adds:  “It’s about celebrating yourself and self-expression. Not being stifled and held back.”

Witch Fever’s EP Reincarnate is out now on Sony’s Music For Nations.