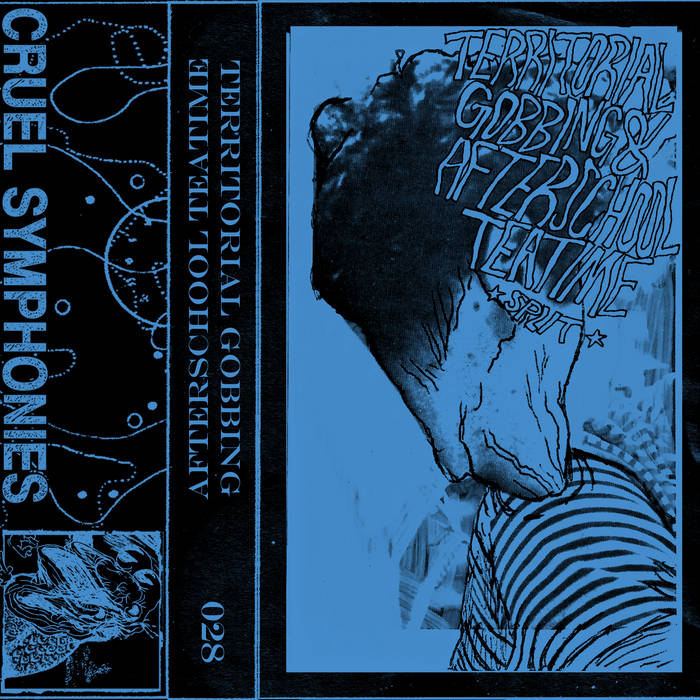 Over the past few years, I can judge how good the year is going to be by what the first album I heard on New Year’s Day is. 2021 was Pale World‘s ‘Death Garage’. 2020 was ‘The Future Grows Beneath My Skin’. Neither of those releases are the same, but both are filled with extreme levels of jubilance and fear. Ideal listening on the first day of the year. This year, 2022, the first new album I heard was a split between long-time favourite Territorial Gobbing and new favourite Afterschool Teatime.

The cassette starts with Territorial Gobbing in a playful, yet malicious mood. ‘Deflanging the Goose Fat’ cuts in and out with cut up samples, blips, static, junk table rattles and murky vocals. At no point do you have an idea of what is actually going on. Like a Magic Eye picture, the less you think about it the more defined the image becomes. It sets the tape up in the best possible way. It tells us that this won’t be a conventional listen. We knew that going in, but this just re-enforces it. It says that Territorial Gobbing is immense fun, and so should we strap in as it’s going to get bumpy. If ‘Deflanging the Goose Fat’ was about abstraction ‘Tuck In’ is more about tone and emotions. Opening with the sound of a flymo, or a plane running out of fuel mid-air, there is a sense of tension. Then a vocal sample that sounds like “Tuck in Insects” starts. This shows that Territorial Gobbing hasn’t lost any of his sense of humour. However, more importantly it does show that he does have restraint. In the past he might have unleashed all kinds of sounds, tones, and drones at us, burying us under a wall of harsh noise, but here he doesn’t. He keeps it restrained. And this feels massive! However, on ‘Cream Soda and Veggie Samosa’ he doesn’t. It is a mixture of the two previous tracks. Skittering electronic loops, and glitches, while a hulking noise just powers through, obliterating everything in its path. If the tape had started with this it would have been game over. Building up to it through two nuanced tracks was a masterstroke.

After all this you’d think that Afterschool Teatime would try and take it down a notch. NOPE! ‘Insect Princess’ opens with a sea of static. Its stormy too. As more waves crash on the shore, more build up waiting for their time to slam down and crush the once majestic mountains and boulders into smaller and smaller pieces. ‘Sea of Decay’ is just 2:38 of jittering noise. Its uncomfortable how much it’s moving. It makes you feel nervous. “Just calm down” you think. But it doesn’t. Thankfully. Instead, it writhes around some more. ‘Crimson Eclipse‘ is the harshest track on the split, at this point. It feels like this is what tectonic plates sound like having sex. Massive crunching tones are interspersed with piercing high-end tones. While listening to ‘Crimson Eclipse’ I’m trying to work out what the point, message, or the takeaway is from it. After playing it a few times I’ve no idea. It feels to be noise for the sake of noise. Like Afterschool Teatime is just seeing how far he can push himself before he either gets bored or admits enough is enough. It’s bloody great! After this level of sonic excess, the final two tracks are slightly more subdued. Slightly… However, that rampant feeling of overindulgence is still there, and you know that Afterschool Teatime could just loose that restraint and just go for it again. Luckily, he doesn’t, and we are left with a, dare I say, charming end to an solid tape.

Which side of the tape you start on is irrelevant. What you get throughout ‘Territorial Gobbing/Afterschool Teatime Split’ is electro acoustic music pushed about as far as it can go. Its unflinching, uncomfortable, hilarious, terrifying, and very, very good!