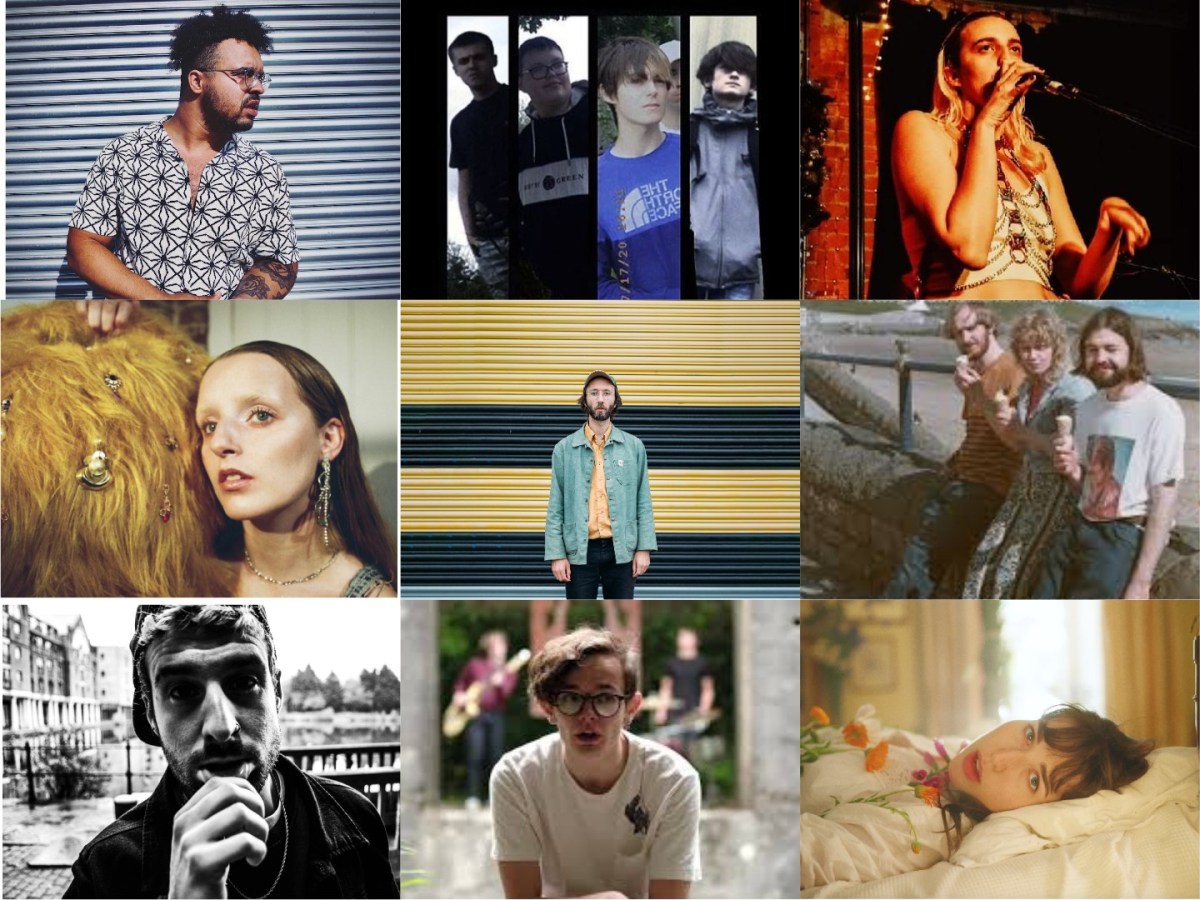 AhGeeBe‘s debut single ‘Cocoona‘ released in November last year, is bloody lovely – and so joyful. Little gladdens the heart more than melody, harmonies and sweet slide guitar; and a slice of cheeky sax for good measure. All those qualities are here, and so Huw Stephens at BBC 6 Music, Adam Walton at BBC Radio Wales, and Georgia Ruth on BBC Radio Cymru have quite rightly given the song lots of delicious airplay.  Partly recorded by Tom Rees (Buzzard Buzzard Buzzard) and partly self-recorded, Cocoona captures the universal feeling of freedom as the world opens up again. AhGeeBe honed his craft in the South Wales quarry village of Creigiau, spending his time chiselling and sculpting away at the piano and guitar from an early age and describes his new songs as “somewhere between old-time country and 60’s cop show theme tunes.” Sounds good to me. (Cath Holland)

Newport trio The Bug Club have been serving up a treat of raucous, smile-inducing garage rock on stages and over a string of releases all over the past few years. Their latest cut ‘My Baby Loves Rock and Roll Music’ has an affectionate fuzzy charm and singalong quality that references The Velvet Underground and Johnathan Richmond, in a cheeky way. While ‘The Fixer’ is a riot of hyperactive riffs and amusingly vocal one-twos, that will leave you singing wryly sardonic lines like “lend me the record that reminds me that I’m not dead” before descending into a breakdown. They first caught our ears with ‘We don’t need room for lovin’ laced with wry, duelling girl/boy vocals that sound like they are wrestling to be on top, skidding guitars it sounds like it could have a party in a cupboard. Clocking in at just two minutes it explodes into a joyous crescendo that leaves you wanting more, it’s an absolutely bloody brilliant riot! The Bug Club are delivering the fun, with the feels and the black humour that is making the world ok for two minutes, and we are here for it! All aboard the Bug Club bus! (Bill Cummings)

Moving from her folk upbringing to working on substantial pop songwriting in collaboration with a host of friends, Welsh artist Greta Isaac has been building a name for herself with a run of superlative singles over the last year building upon her reputation as a writer of smart, personal pop songs. Her Pessimist EP last year was a triumph prompting comparisons with Taylor Swift and Billie Eilish. The nagging rhythms of ‘Like me’ are an insatiable meditation on self imposter syndrome, mental turmoil, and that desperate need to be liked. The brittle introspective verses are thrown off in a bombastic release and guitars of the chorus.  Meanwhile, the heartbreaking delicate ‘FU‘ and fragile recent single ‘Polyfilla’ and the spiky punky pop of ‘5″ 1″ shows she’s a songwriter of depth, breadth and personality able to delve deep into her own issues and make them universal, she has teased another EP in 2022, we can’t wait to hear it. (Bill Cummings)

James Minas is a well established Welsh/Greek producer based in South Wales, working with artists like Luke RV, Mace the Great and Dead Method Whilst the ‘Minas sound’ is his trademark in the studio, his solo project surfs his influences fusing elements of electronica, punk and hip hop to lift up the rock on life on the edge. ‘Payday’ is a visceral collision of punk, hip hop and electronica that bounces off the walls: with angst and frustration, “I get paid Friday, trust me I’m good for it!” he spits in an anti-sing-along, bouncing off the walls above urgent beats and crushing sounds, and it speaks to eking out as much as you can from a bad situation. The aggressive frustration paired with a bleak sense of humour is a trademark of his other songs including the sinister mumble rap of ‘Burner’ with Minas surfing its pitch-black atmosphere to the dead ends of the city with swipes at the government, while ‘Foreign’ has more of a hip hop sway, nagging keyboards and singalong vocalises the struggle with poverty, zero-hours contracts and fit into a not always welcoming Britain. (Bill Cummings)

One of the rising stars of the local Welsh MOBO scene is South Wales’s The Honest Poet replete with stirring warm vocals and positive wordplay, the songs from his Letters to my queen album shows off his big heart on his sleeve and pleas for unity. With his mixture of buoyant beats and his soulful heartfelt pop singalongs such as ‘Purpose‘ and the swaying singalong ‘Red Lights‘. His songs touch on growing up and facing down racial prejudice but have pop accessibility, yet retain his redolent influences of soul and hip hop. His work is an uplifting delight full of positivity through struggle. (BC)

Bare and scrappy and DIY as DIY comes, Primitive Soul from Blackwood in the South Wales valleys were brought to our attention during the summer, courtesy of REPEA*T. These Year 10 teenagers played a debut headline show just before Christmas in Swansea, and sixth months before that sold out vinyl EP Void in three hours. Three fucking hours, for god’s sake. More importantly, these four lads did the wisest thing during plague year, diving into the ethos and back catalogue of the mouthiest voices of generations past, The Clash, The Manics, Rage Against The Machine.  ‘Your mind is dead’ they baldly inform us on Rock n Roll Suicide. It would be the easy way out to file these under post-punk and yet, premature with it – the wonky gentleness of the title track reminds of The Pastels. We suspect there is much to uncover and discover with Primitive Soul in 2022. (Cath Holland)

Aberystwyth teenager Rhys Evan brought out debut EP Tiny House in June last year, singing his stories of rural isolation, small-town frustrations and yearning for the next step in his life. Sensitive intelligent indie-pop with meaningful depths, he shows his emotions clearly and openly in song. He’s championed by Fergal Kinney (NME, The Guardian) and has obvious and wonderfully mainstream ambitions, and we are totally here for that. (CH)

Thallo, aka Elin Edwards, has been quietly building a reputation for evocative and rich, bilingual compositions. Thallo takes her name from the Greek goddess of flowers and spring. With lyrics in both Welsh and English, her five-piece sound takes influence from the archaic lore and personal experience, crafting beguiling canvases borne of her elegant vocals and intricate arrangements: encapsulating elements of jazz, folk and electronic. Thallo released ‘I Dy Boced’ in 2019, her haunting new single ‘Pressed and Preserved’ is a delight. Rich and textured, this instrumental sweep is laced with Thallo’s poignant reflections on the potency of fleeting love and the tragedy of cutting a relationship thriving perfectly in its prime. Like pressed flowers, preserved as immaculate memories. Thallo has performed at The Great Escape, Other Voices, Focus Wales and will be performing at SXSW Festival 2022. (Bill Cummings)

Quietly honing her craft for a few years Aderyn showed she was a star with a cracking set at Wales Goes Pop online in 2020. And her releases so far show this Welsh artist knows her way around a tune and has a voice that can cut out hooky melodies ladled with the ups and downs of life and love. The giddy strums and effervescent melodies of her debut single ‘Lucozade’ balanced chirpiness with a bittersweet quality of frustration with a partner. With her glistening guitars and tumbling percussion, her second single ‘Silver Screen’ was crafty, catchy, and filled to the brim with heart. A sketch of growth and relationship melodrama, young South Walian Aderyn possesses an elastic voice that teeters between hopeful and heartbroken, sailing between bittersweet and kickass – Soccer Mommy and Courtney Barnett would surely approve. This nifty hooky chorus trembles wonderfully with a questioning “so where do I stand?” refrain that drops to an infectious “uh oh“. It’s an earworm that burrows its way into your head and you will be singing along for days. The new single ‘Scotty’ is a lovelorn power-pop anthem, that shows she has a different trajectory in mind. Aderyn is a little star. (Bill Cummings)