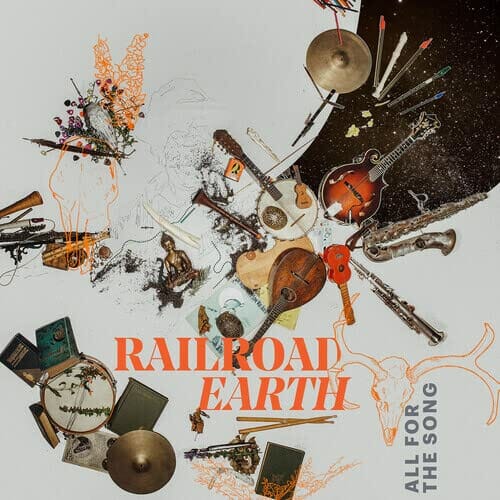 In early 2020, Railroad Earth co-founder Todd Sheaffer announced that the band’s next release, All For the Song, would be a “destination album,” not only taking stock of the band’s journey as it approached its 20th anniversary, but also celebrating the life of core member Andy Goessling, the multi-instrumentalist who had died of cancer in 2018. The album, cut in New Orleans and produced by Anders Osborne—like most everything—got derailed until this year, but now that it’s here, it’s easy to understand why the band was hyped up about it. As always, the bulk of the material was written by Sheaffer, although some other members nab co[1]credits on a handful of tunes. Although not quite a concept album, there is a synergy that ties the tunes together, a sense that Railroad Earth chose to honor their fallen comrade by moving forward, albeit not so drastically that they are ever unrecognizable. It opens with “The Great Divide,” prominently featuring the violin of Tim Carbone. “There’s tellin’ of a better home a-waitin’/ Waitin’ on the other side” are the first words sung, but nowhere does the songwriting get bogged down in melancholy. “Don’t you want to come? Don’t you want to be?/ Flyin’ like the golden eagle/ Off and flyin’ free?” goes the chorus just a minute later. The spirit remains high on selections like “My Favorite Spot,” “Blues Highway” and the spare, soulful title track, which closes the album. “If I told you all about it, I could write a book, all the crazy chances that we took/ Aren’t we lucky? Yes we’re lucky to be alive,” Sheaffer says, giving notice that Railroad Earth has not only rebounded but, some two decades down the road, are as curious as their fans to see what’s around the next bend.Please enjoy this full-length feature from Relix Magazine. Not a subscriber? Show your support for only $2/month