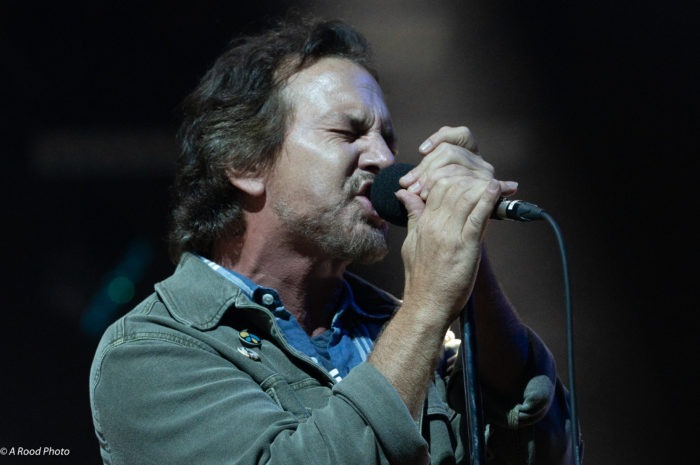 Photo credit: Stevo Rood***Eddie Vedder said he had permission from Brandi Carlile to convey to the capacity crowd what she shared with him earlier.  It was getting late on Sunday evening- the final night of the three-day Ohana Festival that took over Doheny State Beach in Dana Point, Cailfornia- and Vedder was in the home stretch of Pearl Jam’s headlining set.  Carlile had preceded Pearl Jam’s thunderous two-hour finale with a scintillating 60-minute appearance of her own, adding her contribution to this year’s lineup that wowed tens of thousands- Carlile and Vedder, included- throughout the first of two weekends at the beach.“Don’t cancel me for saying ‘power bitches’ in the nicest way possible,” Vedder said, repeating the colloquial term Carlile offered as a supreme compliment to Ohana Fest’s talented throng of female artists.  Carlie then emerged from the side of the main stage, joining Pearl Jam for a slashing run-through of “Better Man,” closing out the set.  Vedder and Pearl Jam returned for a four-song encore, beginning with a dedication from Vedder to the recently-relocated homeless of L.A.’s Venice Beach, then launched “Let Me Sleep.”  Both were sentiments consistent with a festival, now in its fifth installment, curated by Vedder and keenly aware of its sense of conscience and purpose, alongside some incredible performances. Friday began ominously, first with the announcement that headliners Kings of Leon canceled due to a family emergency.  Next, a rare and brief, lightning-imbued thunderstorm necessitated a late-afternoon, temporary evacuation of the main grounds.  Vedder’s solo project band- featuring all-stars Pino Palladino, Chad Smith, and Andrew Watt- were scheduled to headline just Saturday, but doubled up and subbed-in for Kings of Leon with an abbreviated set mostly of covers, with guest spots from Vedder’s daughter, Olivia, and one of Saturday’s featured artists, Glen Hansard.  The makeshift ensemble closed with “Purple Rain,” perhaps a subtle wink to the weather, perhaps as purely coincidental as were earlier appearances by Americana darlings, CAAMP, and soul upstarts, Durand Jones and the Indications, that both included Fleetwood Mac’s “Dreams,”- with its lyric, Thunder only happens when it’s raining, taking on particular poignancy.The balance and abundance of diversity certainly was no coincidence.  For every member of rock’s establishment slated to perform- Pearl Jam; My Morning Jacket; Spoon- there were several emerging artists- especially Friday’s set from Black Pumas- representing the multitude of genres, and gender, surrounding them.  Whether Celisse’s criminally under-attended Storyteller stage appearance on Friday, or Saturday’s exceptional parade of Natalie Bergman, Combo Chimbita, and Maggie Rogers that countered magnetic shows from The Backseat Lovers, Mac Demarco, and Hansard, Ohana was as inclusive and evocative as ever.Yet, it was Sunday’s slate- including Shovels and Rope, Jade Bird, Mon LaFerte, Sharon Van Etten, Yola, and finally, Carlile- that served up one stunner after another.  Carlile’s assessment was undeniably on target, informality aside: these are some powerful women.  And if it wasn’t obvious by ten o’clock Sunday night, Vedder was sure to make it so.Pearl Jam mowed through its return to the stage with a robust barrage of classics and a half-dozen newly-christened tracks from 2020’s Gigaton.  Just a week before, the band knocked off the rust with an appearance on the New Jersey shore at See.Hear.Now.- a festival curated by iconic rock photographer, Danny Clinch.  Seven songs in at Ohana, Vedder welcomed Clinch and his harmonica for “Red Mosquito,” reprising their onstage Jersey collaboration, before shifting to another Gigaton single, “Superblood Wolfmoon.”  The run-up to Carlile’s cameo was Pearl Jam at its most impressive; including the trio of “Even Flow,” “Given to Fly,” and “Do the Evolution,” as guitarist Mike McCready explored distortion-soaked solos amidst Matt Cameron’s booming kick, with Vedder, in superb voice, praising the SoCal crowd for its accompanying vocal prowess.“Alive,” the anthem that announced the group’s arrival some three decades ago, was the fitting, COVID-era festival closer.  As McCready shared his spotlight with Watt- literally handing over the guitar mid-solo, then returning to claim it a few glorious minutes later- becoming the instant symbol the festival’s Ohana name suggests; with a now-elder ambassador of rock, Eddie Vedder, and his family- biological and musical- coming together for a 21st century gathering of some powerful sisters and brothers.