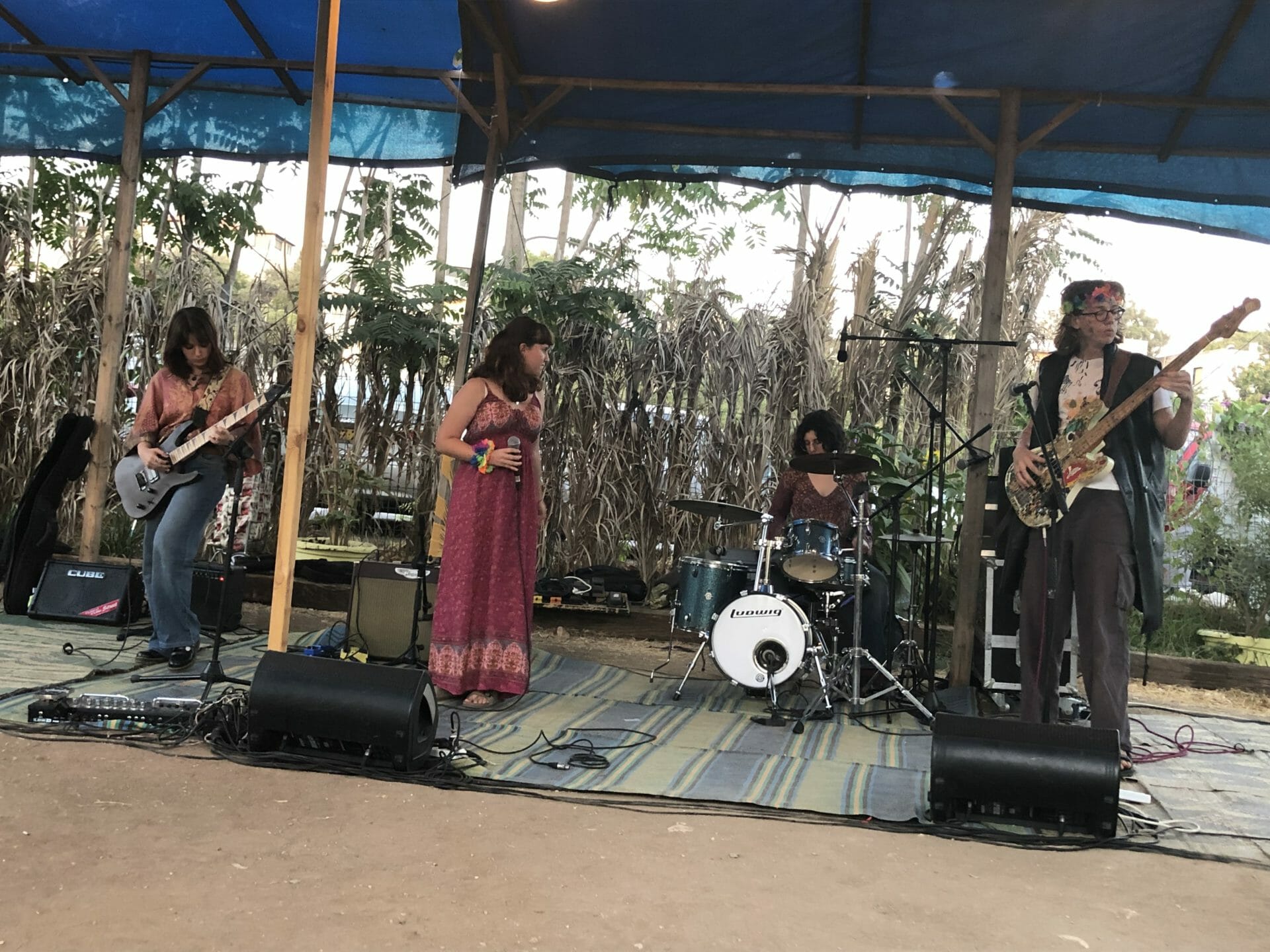 Finding Silo Restaurant in Jerusalem‘s First Station, the site of the original 1890’s Jerusalem Railways Station turned entertainment, culture and dining center, is no small feat. But the search for the funky outdoor concert venue just off of a big parking lot–and the wait for the acts to take the stage at the thrice yearly Jerusalem Woodstock Festival–was worth the wait.The Jerusalem Woodstock Festival, the brainchild of American born addictions counselor, youth and family worker, self-described “creative therapist,” and longtime Jerusalem resident, Tracey Shipley, has been taking place one to five times a year since its inception in 2016.  “I like to create things and I did when what I wanted wasn’t available,” reports Shipley, whose target audience seems to be mostly American immigrants to Israel “of a certain age,” many clad in Grateful Dead or tie dyed shirts—and yarmulkes..  Native born Israelis—mainly teens and 20 somethings—were also in attendance, perhaps to catch a glimpse of an era they had only heard about from TV or films.  “I have become a band producer,” adds Shipley, pleased that she has brought bands covering King Krimson, Country Joe and the Fish, Lynyrd Skynrd and Santana to music fans of Israel who don’t often have current stars or even rock legends passing through the Middle East.The festival, which feels more like a backyard gathering, consists of a makeshift stage, lawn chairs set up on dirt in the restaurant’s courtyard, a single sound guy, and a mini Shakedown Street selling jewelry and sparkles—run by the funkily and modestly dressed wife of the lead guitarist and singer of the Grateful Shefa Band, the Grateful Dead cover band from Safed in the north of Israel.  The long haired, bearded musician, Rabbi Shalom Leibowitz, grew up in a Chabad (Hasidic) family in Boston.Tracey opened the evening by grabbing the microphone and shouting out “Calling Yonaton, our sound guy,”  She then asked, “Who came to hear music of the 60’s”  The 120 attendees—all wearing colored leis to indicate they had paid the admission fee—responded with cheers and clapping.  Tracey laid out the order of the 7 pm to 11 pm evening:  four warm up bands and three “adult” feature bands.Shipley’s choice of youth bands—and her commitment to the youth of Jerusalem is impressive.  Shipley founded SoBar, a play on the words “sober bar)–Jerusalem’s first alcohol-free live music club for youth, she regularly puts on cultural programing for Ethiopian Jewish teens, and she founded the Jerusalem School of Rock which now receives support from the municipality of Jerusalem.  The Jerusalem School of Rock affords talented teens in love with rock music to form rock bands, rehears and perform live in Jerusalem, including at the various Woodstock Festivals.The various combinations of junior performers (who often played in each other’s’ bands) were impressive for both quality and unexpected nature of the songs performed including Dark Side of the Moon, Wild Horses, Castles Made of Sand and Wild Thing. “Who knows Melanie? She’s the bestest” asks and answers Shipley before Shevy and Ora Leah, young singers and guitarist, launched in to a beautiful rendition of “Look What They’ve Done to My Song, Ma.”The first of three adult bands of the evening, Wild Thing Band,” played familiar songs like Dead Flowers, Midnight Hour, and Jonny B Goode.  The large group of mostly older musicians were decent but might have opted to play way fewer songs—especially with Shlomo Mizrachi, the Jimi Hendrix of the Middle East and Grateful Shefa Band still to come.When Shipley immigrated to Israel and started organizing the Woodstock Festival, she had never even heard of the legendary in-these-parts, Mizrahi.  Mizrahi, 73, was a member of the Habama Hahashmalit (The Electric Stage) rock band in Jerusalem when the actual Woodstock Festival was taking place in 1969.    Once Shipley learned of Mizrahi’s unusual guitar playing talents, she immediately included him in Woodstock.  He played expected Hendrix classics like All Along the Watchtower, Little Wing, Foxy Lady, Castles Made of Sand and Red House to perfection.  Hearing a few riffs of The Star Spangled Banner during his set was a welcome surprise.  Playing the entire Hatikvah, Israel’s National Anthem Hendrix-electric style was shocking and wonderful.Shipley always closes her shows with a Grateful Dead cover band.  “By the end of my shows, people are always dancing!” she reports.  Grateful Shefa didn’t disappoint—and fans seemed to enjoy I Know You Rider, Shakedown Street, Morning Dew, Franklin’s Tower and Fire on the Mountain—even with the occasional sprinkling of Jewish religious references and Hebrew phrases within the well-known Dead lyrics.  As an example, in Fire, Lebowitz adds, “We’ve got geulah (redemption or deliverance) b’chol dor vah dor (Hebew or “in every generation”).While Shipley’s Jerusalem Woodstock will never be half a million strong—like the slightly better known upstate New York festival–she will consistently attract up to a couple of hundred loyal music fans at her several times a year music festivals, she will consistently break even or turn a profit, and perhaps most importantly, she will feel great knowing she is keeping an important era and genre of music alive in a place 6,000 miles and 60 years from where it was born.