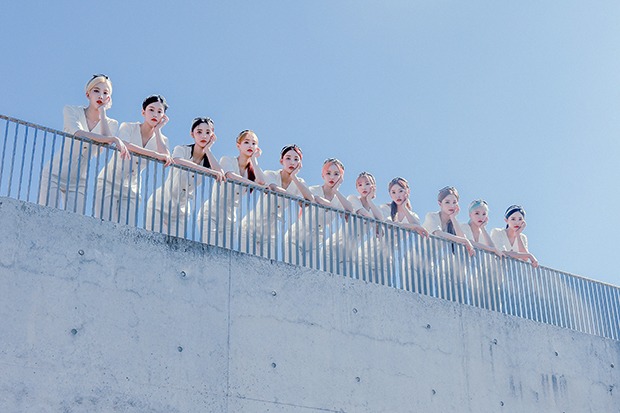 LOONA’s global following continues to expand with each release. The K-Pop girl group’s latest mini-album, [12:00], shot straight to number one on US iTunes and duly became their first chart entry on the Billboard 200. Furthermore, the release of an English-language bop called “Star” as the project’s second single reflects a growing awareness of LOONA’s massive popularity around the world. Make no mistake, they are now on the brink of a BTS or BLACKPINK-like international crossover.

I recently had the opportunity to ask the hitmakers about the creation of [12:00] and its stunning, midnight festival aesthetic. LOONA spoke about their desire to keep reinventing themselves with new sounds and colors, and revealed that the title provides a clue about their next project. Other topics of conversation included determining who sings what, the absence of HaSeul due to ill health and their strong interest in cracking America. Get to know one of K-Pop’s hottest acts in our Q&A below.

JinSoul: Our musical colors had been very various since we made a comeback each time with different concepts. To compare the title songs of this year’s albums, “So What” in [#] album is a song with very strong and powerful performance. “Why Not?” in [12:00] album is a song where we can show more funky and rhythmic performance.

How do you come up with such interesting mini-album titles?

HeeJin: For each album, there is always a connecting point of LOONAverse, not just in the music videos or songs but also in the album title as well. I think it can be a hint for the next album.

What inspired the song “Why Not?” What makes it perfect for your next single?

Go Won: [12:00] album consists the message of ‘With all LOOΠΔs around the world.’ “Why Not?” is a song that fits the slogan of this album, because it’s a song that has the freedom and different color of characteristics. We want to make people feel that they are enjoying a festival when they’re listening to this album since the world is going through difficult times. We want to give our energy to everyone.

How did you come up with the [12:00] imagery? The Midnight Festival aesthetic is so fresh and pretty.

HeeJin: I think it’s a challenge of LOONA to present ourselves with a different look each time we make a comeback. For the [12:00] album, we wanted to show everyone that LOONA is a well-rounded group, as well as showing them something new.

With so many members in the group, how do you decide who sings which part of the song?

Chuu: Company considers which members fit well into the song/lyric in terms of the image, and who can pull it off the best when singing certain parts. They combine and distribute the parts like that.

Has it been hard without HaSeul in the group?

HyunJin: All the members think that there are 12 of us in LOONA whenever or wherever we go. But this time, because it was only 11 of us during [12:00] promotional activities due to HaSeul’s absence, sometimes LOONA was mentioned as a group with 11 members. That made me sad, but we think that HaSeul’s health is a top priority and we don’t want HaSeul to be pressured or impatient. LOONA and Orbits will always wait for her here.

LOONA is already very popular in the US. Is America going to be a priority in the future?

Yves: US promotions are always important, and all of us are trying to do additional preparation besides dancing, singing, or speaking languages for their self-improvement.

Sadly, we are not able to go to the US and perform in person but we are still trying to reach global fans in various ways, with different contents and “Star.” I always thank everyone for sending us so much love and we want to meet Orbits not only in the US but all over the world.

Are you inspired by the international success of groups like BTS and BLACKPINK?

YeoJin: BTSand BLACKPINK expanded more opportunities for K-POP. I want to monitor and learn so LOONA would be able to do that as well.

2020 has been a really difficult year. How did you stay positive and creative?

Who are some of your favorite Western artists?

JinSoul: H.E.R and Ariana Grande are my favorite artists!

[12:00] is your third mini-album. Are there plans for a full album in the future?

Kim Lip: LOONA is always trying our best to show good music and performance, and if we get an opportunity, we would like to present you a full album with a new concept filled with music that we are good at.

Are there any performances planned?

ViVi: We are currently continuing our promotions with the follow-up song “Voice,” which is the Korean version of “Star.” If we have a chance, we would like to show you many performances. Please look forward to our follow-up activities!

Why do you think K-Pop is so loved around the world?

Olivia Hye: I think the softness and various expressions of Hangeul (Korean alpahbet) can be found very attractive. And I think each characteristic of K-Pop idol groups can come across as very refreshing, and I also think communicating closely with fans in various ways is one of the reasons that K-Pop is loved. Above all, synchronized choreography and performance, and distinctive color of music seem to be the most important reason.

Would you consider releasing another Christmas song?

Go Won: Yes! All of our members love Christmas, and we wish to be with Orbit on a special day like Christmas. That’s why we’d like to release a song with a Christmassy feeling like “Carol.”