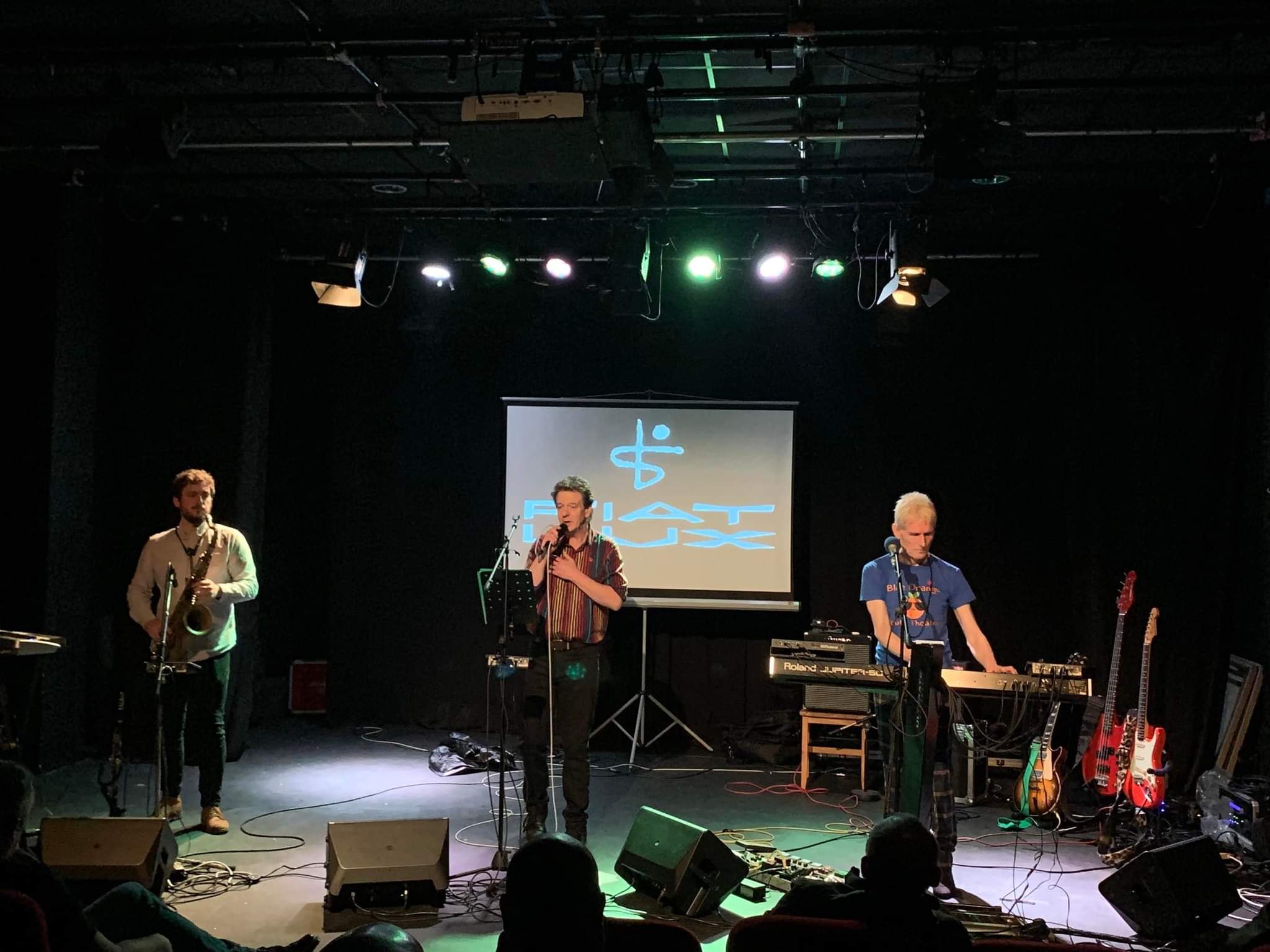 Fiat Lux have played only seven live shows since re-forming in 2017, and two of these have been at the lovely Blue Orange Theatre in Birmingham’s Jewellery Quarter area, as part of the Seventh Wave Festival Of Electronic Music. Local fans (such as myself) are still pinching themselves to think that they saw the band here two years ago (almost to the day), and are pinching themselves still further to think that they get a second chance tonight.

Before they take the stage tonight though, solo electronic artist RBMK presents a half hour soundscape backdropped by images that are sometimes amusing (robots and indeed robot dogs), sometimes mundane (warehouses and factories) and sometimes unsettling (nuclear explosions and fallout). The combination of intense, sometimes ‘difficult’ music and the visuals makes for an arresting show. Not one to hog the limelight, RBMK (aka Stefano Siteni), gives a bashful half-wave to the audience and disappears into the darkness once his set is played out, without uttering a word throughout.

A Fiat Lux show in 2021 has the Lux-ury (sorry) of being able to now draw from three full length albums, as well as the array of fine singles (and the mini-album Hired History) from their original spell in the 1980s. Those three full-length efforts have all emerged in the last couple of years, two being bona fide new releases and one being the great lost 80s album Ark Of Embers, finally out in the world to get its long overdue, erm, dues (I’ll leave the puns for now). And it’s a track from that lost work, ‘No More Proud’, that introduces tonight’s performance, the three members appearing on stage to warm cheers from the audience of discerning synthpop fans. It’s a really special atmosphere.

From there, it’s a quick fast forward to 2021 and the new album, or in fact the initial single that appeared last year in the first Summer of the pandemic, the hard-hitting (How Will We Ever) Work This Way, driven along by multi-instrumentalist David Crickmore’s elastic bass line and now fully-fledged Fiat Lux member Will Howard’s sax.

“A lot has happened since we were last here”, says singer Steve Wright, and just when the audience is expecting a Covid-related observation, he continues wryly “He’s moved house, (Crickmore), he’s had a baby (Howard) and I’ve got engaged!”  There’s a warm dialogue with the audience throughout that really does make it like one of those ‘An Audience With…’ shows, especially with the seated, intimate layout of the venue (it’s a mystery why more bands don’t include it in their tours).

Fiat Lux also utilise strong visuals during their set – this is possibly most affecting on their classic ‘Photography’, which shows images of the band nearly four decades ago, and mists up a few eyes in the audience, especially the footage and pictures of the late Ian Nelson, the original saxophone player and such an integral part of Fiat Lux V.1.0 (he very sadly left us in 2006).

’Cul De Sac’ from new album Twisted Culture already receives a heroes welcome just a week after its release – it’s sandwiched between a couple from the other ‘new’ album, 2019’s Saved Symmetry, ’We Can Change The World’ and the happiest song in the world, ‘It’s You’, which feels like a Fiat Lux modern day anthem.

1984 single ’Solitary Lovers’ meanwhile has a story from Crickmore about how his original bass line was swapped against his wishes for a synthetic alternative, after he gleefully restores his intended bass line to the song. There’s such a lovely rapport between Wright and Crickmore all these years on, and the modest Howard fits in brilliantly, thanked and acknowledged by the others many times during the evening.

‘Aqua Vitae’ is probably the funkiest track in Fiat Lux’s catalogue, and ‘Splurge’ probably the most restless, fidgety almost post-punk-y number; there’s a contrast of material across the set, with Crickmore effortlessly (well it looks effortless!) swapping keyboards for bass or guitar as the tunes demand.

’Blue Emotion’ is the mightiest 80s single not to reach the Top 40 (not just of Fiat Lux, but of anyone!) and closes out the main set before a highly entertaining question-and-answer session with the audience, addressing 80s Wakefield nightlife and the beginnings of the New Romantic and Goth scenes (complete with Andrew Eldritch name check and tales of a legendary scene figure named Stopper)

The band then kindly supply a celebratory encore of one of their killer 80s singles ‘Secrets’ and their actual 1982 debut single ‘Feels Like Winter Again’, which had been, erm, ‘suggested’ by at least a couple of audience members throughout the evening.

To have Fiat Lux back and on such great form is an absolute joy. They don’t play many shows; just make sure you are at the next one!