It’s Riri Friday! However, other artists also dropped singles and albums today. Take a dive in with us as you go on a merry-go-round of what’s new in music. If you’re not caught up, hit up our past editions to build up your winter, gym, and romantic playlists. As always, there is a track for every mood. 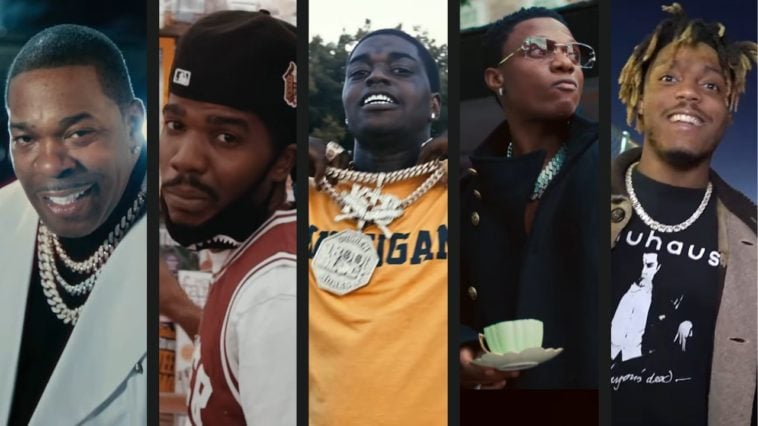 Smino is cooking. Last week, the Motown signee dropped “Matinee,” and gave us a taste of his album which also dropped today.

Luv 4 Rent is a 15-song ode to love and romance (Is this a hat off to Dido?). If you’ve hit Kid Cudi’ Entergalactic, this is a perfect foil as you hit next on your playlist.

This is a feel-good album, probably to become the standard for mood-brightening music. With multiple features, including the effervescent J. Cole on “90 Proof,” this is a must-listen.

Meanwhile, look out for another Smino album, which the artist previously announced on the Bootleg Kev Podcast. The rapper will surely be busy, with the anticipated album drop and the planned tour with JID.

Just a few months after dropping Back For Everything, Kodak Black has released Kutthroat Bill: Vol 1.

The 19-track album follows shortly after the rapper announced his imminent departure from Atlantic Records to join Capitol Records.

In all, Kodak was also rumored of a romantic fling with R&B veteran Monica before she came out to clear the air on the eve of his album release.

Juice WRLD – In My Head

Juice WRLD is one of the top ten most streamed artists this year, and his new bop “In My Head” is about to shoot that up.

It may be a good thing that Drake and 21 Savage’s joint album, Her Loss, did not drop today after Deuce complained about Honestly, Nevermind dropping on the same day as his.

This song “slaps” and that is no pun. It is always a pleasure to see and listen to Busta Rhymes, and “Slap” is no different. He still delivers even as he teams up with a new-school rapper like Conway The Machine and a veteran in Kane.

The Busta vibe is eternal.

How do you change the news cycle? Do something new. After a relatively poor outing at the Nets’ halftime show (Fivio blames technical issues), Fivio has ensured the attention stays on his music with this new song, “God Did Freestyle.”

This is quite similar to the Ma$e issue, where he later dropped “London Freestyle.”

Let us know what you think of it.

Ahead of his album release, More Love, Less Ego(November 3rd), afrobeat king and multi-award winning artist Wizkid has dropped a single off the album, “Money and Love.”

This follows after Bad To Me,” where the newer album would cement Wizkid’s full evolution from the high-energy, percussion-strong artist to this iteration that is more focused on soft sounds and smooth tones.

Jam to it and hit us with your comments.

Yes, this is a reminder for fans. Mike raps about his thoughts on many subjects, focusing on politics and Black culture in this new bop.

The conscious rapper stays true to the man that collaborated with 2 Chainz to save Atlanta businesses.

Speaking of 2 Chainz, did you catch him on Prime Video last Thursday? Be sure to tune in on Thursdays to watch him host Amazon Music Live.

SOHH, have a great weekend. As an honorable mention, listen to the extended version of Eminem’s 8 Mile.