The Who at the Hollywood Bowl 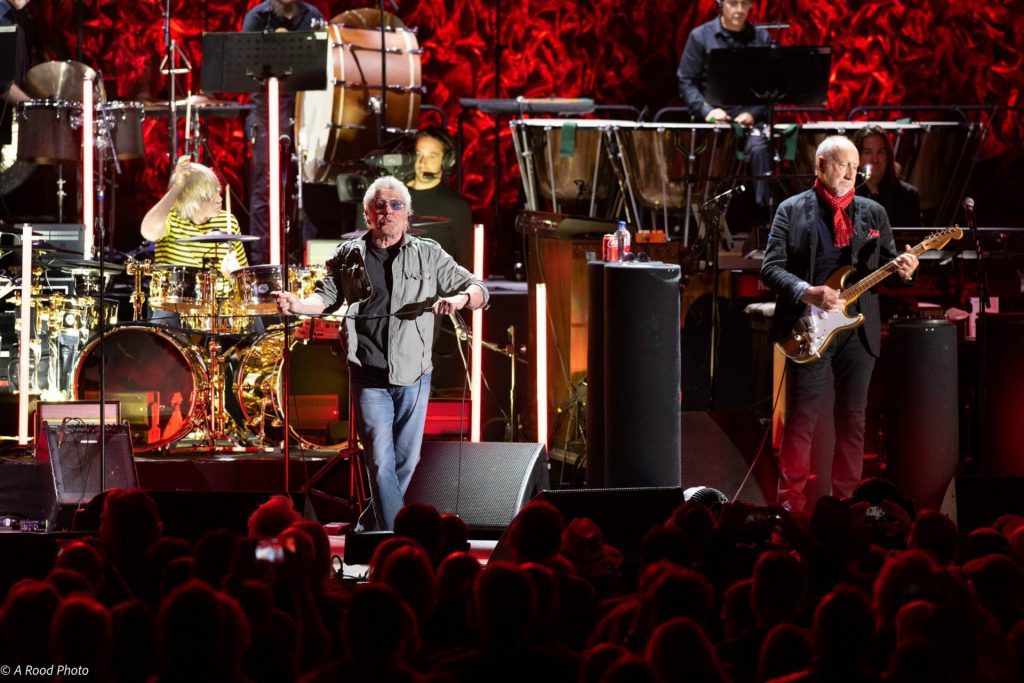 photo by Steve Rood***Many moons ago The Who were setting records as the loudest band in the world.  The quartet’s ear-bleeding achievement in 1976 has been supplanted many times since, but there endures, even in 2022, the idea that The Who are not The Who unless they are pushing decibels into the red.  The Who really are not that Who even if they wanted to be, as founding drummer Keith Moon passed nearly 45 years ago, and (hard to believe) it was 20 years ago now that founding bassist John Entwistle left us.The two Who that carry on are the band’s essential creative forces–guitarist, singer and songwriter Pete Townshend and lead singer Roger Daltrey- -and for the more recent several tours of the U.S. and Europe have come to arenas and amphitheaters with a full orchestra in tow.  And enough quieter moments in their two-hours-plus performances to re-cast these veterans of over five decades in the trenches of rock-and-roll as, dare it be said, quite dignified.Townshend will still whirl his windmill strokes across his overdriven Strat, and lace in a few obscenities into his mildly scattershot asides between songs.  Daltrey still whips his microphone over, under, and around him, flexing now as a spectacled, graying frontman; his build and dress resembling more his youth as sheet metal cutter and less as the golden-tressed, rock opera visage of Tommy.That’s where the show begins, with Tommy, the band’s most successful album, and an ideal marriage of Townshend’s song craft and the orchestra’s scintillating accompaniment.  Starting with Tommy’s “Overture,” and following with a half-dozen more from the opus, the pairing immediately satisfies, just as it did on the 2019 run- the Moving On! Tour- that last graced the Bowl.  Why mess with success?And though the set did feel mostly familiar on this Hits Back! trek, there were some conspicuous shifts from the previous go-round, including and especially returning the version of “Won’t Get Fooled Again” to its electrified glory during the band-only middle portion of the evening.  This time they also offered some song choices from the latter part of Who history, replacing some of their ‘60s hits with deeper cuts such as “Naked Eye” and the ‘80s nugget, “Another Tricky Day.”  As for those decibels, they elevated as forcibly as needed for exceptional takes on “Who Are You” and “Eminence Front.”Amongst all the talent onstage–and it is stacked–the standout remains the work of drummer Zak Starkey, whose tenure with the group is now over two decades long.  Starkey’s fluid, yet concentrated mayhem is the best of Moon coupled with a conscious eye and ear for the time-keeping of an exacting orchestra.  It’s as nimble as it sounds, balancing Townshend’s fury with the collective symphonic adherence to their composed parts.  Starkey is the keystone.Ultimately, it’s the power of these songs, if at a lesser volume, that still reverberates.  It’s the power of Daltrey’s still blood-curdling screams, his control and range in the highs and lows of his signature voice, his shaping of melody and phrasing for optimum emotional effect.  It’s the power of Townshend’s original intentions within the songs to feel as much if not more relevant than the day he wrote them, the crunching, body blows of his guitar, and his irrepressibly wry wit.  These are the qualities that have sustained this catalog and these wonderfully memorable live performances; even Townshend noted that “Ball and Chain,” the lone entry from their 2019 WHO album included on the evening’s song list, was the only one chosen because so many others of their past were more deserving.As such, the orchestra returned to partner on five from the stellar Quadrophenia, then swung their way through the final “Baba O’Riley,” and a parting bow from the band and extended ensemble.  They did not shatter any eardrums.  Instead, The Who hit back with the muscle of maturity and a strength in numbers, knowing exactly who they are in 2022.