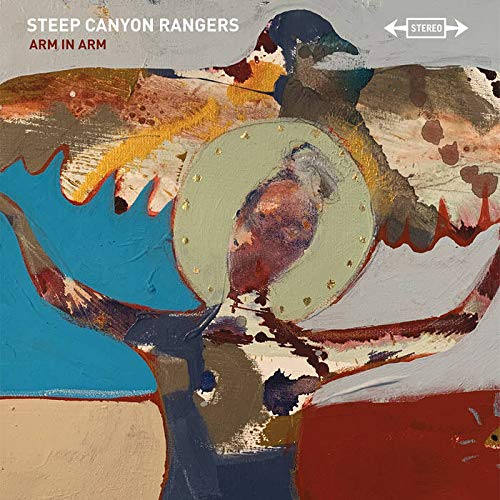 Arm in Arm is The Steep Canyon Rangers’ third full-length album in a year, hot on the heels of a live set and a one-off collaboration with the Asheville Symphony that went a long way toward furthering the definition of just who these North Carolinians are. Arm in Arm is more of a placeholder than another great leap forward, but that’s OK; it’s a solid collection that’s the equal of any the sextet has made before. The Steep Canyon Rangers proved long ago—back when they still retained the genre’s standard instrumentation and structures most of the time—that they respect the conventions of bluegrass. But they’re even more pumped when they blow those conventions up, adding in drums and other elements Bill Monroe would not have approved of. The opening “One Drop of Rain,” which the SCR describe as “a wistful, longing confession of the effect love can have on us,” would have been at home on one of their earlier, more traditional efforts, but not so “Every River” or “In the Next Life,” songs that unabashedly and seamlessly incorporate rock and pop into the mix. Mostly though, it’s the lyrical content that demonstrates the band’s maturity: “Take My Mind,” which features The Wood Brothers’ Oliver Wood and pianist Michael Bearden guesting, borders on manic (in a good way), as they sing “I could walk out in the rain, find me a rainbow/ Now I sit in my room and pull the shade on my window /But the shadow I cast never fades away/ It covers up my brightest days.” It’s a simple but effective lyric, and one that the early SCR might’ve stayed away from. Today, they are more fearless.