The Felice Brothers – From Dreams To Dust (Yep Roc) 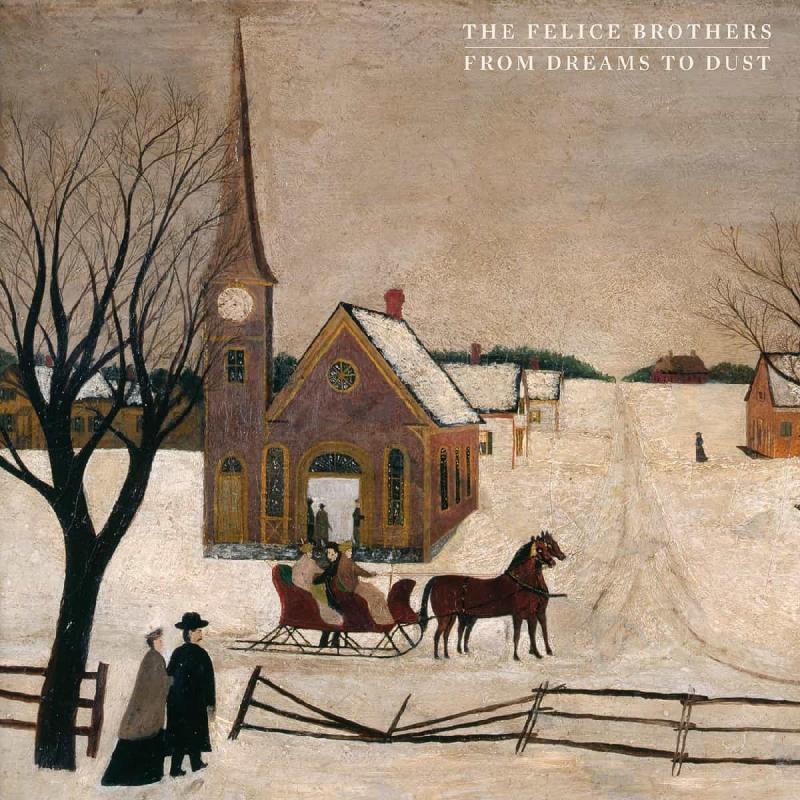 Part of the reason The Felice Brothers – now in their 15th year as a recording entity, believe it or not – have never released anything less than enjoyable, is because they’re always looking for new ways to enhance their sound. Their first, eponymously titled album was, you may recall, recorded in a chicken coop. For From Dreams To Dust, the band took refuge in an 1873 church in upstate New York that Ian Felice renovated himself.

He appears to have done a great job. The acoustics dance happily around the hall and give proceedings a slightly unhinged feel on the irresistibly playful single ‘Jazz On The Autobahn‘ and the Violent Femmes like ‘To Do List‘, which are both great fun. But often The Felice Brothers are at their shimmering best with their more balladic (musically at least) numbers, and the lovely ‘All The Way Down‘ certainly ticks all the right boxes in that respect, before the more intense ‘Money Talks‘ leads you in with a barely perceptible spoken vocal that may as well have been laid down by Darth Vader. Eventually, even that becomes a joyous, celebratory number in its refrain before ending as ominously as it began.

‘Be At Rest‘ appears to be Ian’s own vision of his own funereal eulogy. It’s a quite hilarious and poignantly beautiful spoken-word piece that might just be the best track on the record. “Mr Felice, six-foot-tall, a hundred and forty-eight pounds, soft teeth, sleep-deprived, below-average student. Owner of two ill-fitting suits, wearer of hand-me-downs, often lukewarm and withdrawn, bathrobe often loosely tied” – you get the idea, full of incisive self-deprecating humour. You can’t help but applaud it.

Further introspection is delivered on ‘Inferno‘, recalling a trip to the cinema as teens to see Fight Club, which was sold out “so we went to see Inferno instead.” It’s all told through wistful nostalgic eyes – “Who’s that fighting on the banks of the Rio Grande? Jean Claude Van Damme.” There’s just something so relatable about The Felice Brothers, romanticising the past whether it was good or bad because let’s face it, a lot of us do exactly that.

The inclusion of Jesske Humme (part of the band since 2019’s Undress) does seem to be heading the band in new directions and there are undoubtedly flourishes of his erstwhile band Bright Eyes on tracks like ‘Silverfish‘, while ‘Blow Him Apart‘ is an altogether jazzier number, all soft brushes and weeping country guitar twang, which recalls Dylan in his post-1997 resurgence period.

All in all, it’s yet another captivating album from the New Yorkers and here, they’re starting to feel like favourite old friends who’ve just turned up on your doorstep but want to talk about death. Despite this, they’re still tremendous fun to be around, and long may that continue.

From Dreams To Dust is out now on Yep Roc.