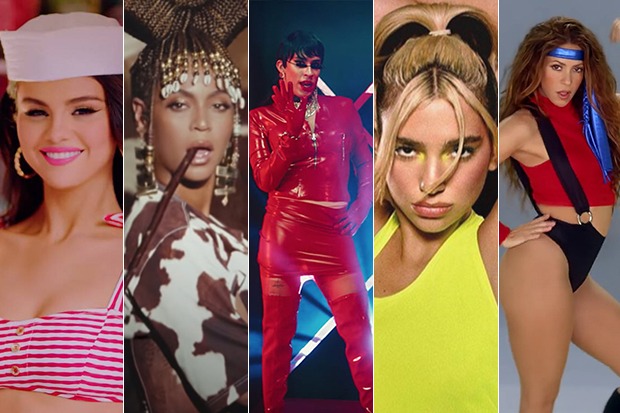 The twists and turns of 2020 changed the way music videos are made — at least, for the foreseeable future. Self-directed, DIY visuals became increasingly common (even from major artists), while labels employed COVID protocols and cutting-edge technology to deliver glossy, big-budget fare. There are good and bad examples of both, proving yet again that an innovative, song-appropriate concept is king. A glossy, semi-NSFW video that harks back to ’00s excess made perfect sense for Cardi B and Megan Thee Stallion’s “WAP.”

On the other hand, the grungy approach Miley Cyrus took to “Midnight Sky” suits the song and the hitmaker’s entire era in a way that something more polished would not. As a result, the best videos of 2020 offer an intriguing mix of styles that reflects the myriad of ways of making art during a global pandemic. It should be noted that this countdown concentrates on pop music videos (and genuine crossover hits like the aforementioned “WAP”). Take a deep breath and dive in below.

We don’t deserve Kelly Rowland. The Child of Destiny casually rolled out two of the year’s best videos — “Hitman” and “COFFEE.” The latter comes out on top due to the sheer beauty and power of the imagery.

If you’re going for over-the-top, you might as well go all in. And that’s exactly what Maluma does in the mini-telenovela doubling as the Colombian superstar’s “Hawái” video.

“Kings & Queens” is throwback to the highly stylized, choreography-filled videos of the late ’00s. Stan Twitter accused the breakout star of jacking Lady Gaga’s aesthetic, but this extravaganza stands on its own.

How do you make a salacious bedroom anthem palatable in the age of inexhaustible outrage? By giving the video a playful, feminist spin. Throw in stylish looks, choreography and a female president, and Ariana Grande’s “Positions” somehow walks the line between old-fashioned and forward-thinking.

“Smile” found our heavily pregnant heroine plating a circus-themed video game that is lovingly brought to life via digital animation. Katy Perry really went above and beyond with this one, and it deserved so much more.

Yes, “Blinding Lights” better captures The Weeknd’s grimy, Sin City aesthetic. But “In Your Eyes” gets my vote due to the dance floor decapitation.

Shakira serves looks on a train, while Anuel AA lurks in the background. What more do you need?

As lovely and whimsical as the song. Taylor Swift’s “cardigan” gave us special effects, a magical piano and some of the most striking visuals of 2020.

The quality of a video doesn’t depend on the size of your budget. Chloe x Halle’s “Do It” is a simple concept executed to perfection. From the styling to the editing and lighting, everything about this is just right.

Harry Styles and the stunning scenery of Italy’s Amalfi Coast turns out to be an extremely heady combination in “Golden.”

In all honesty, BTS could have any number of videos on this list. I’m sticking with “Dynamite” because of its historic success and massive impact on pop culture. The world’s biggest group really brought the song’s throwback, disco vibe to life with this feel-good opus.

A love letter to the 1980s. Cute, nostalgic and brilliantly conceived, Dua Lipa’s “Physical” soars higher than it has any right to.

Self-directed, evocative and perfectly suited to the song’s retro influences. Miley Cyrus made several dozen points with “Midnight Sky,” which ranks as one of the year’ best singles and videos.

Melanie Martinez is pop’s true visual queen as her feature length K-12 film proves so concretely. “The Bakery” finds the visionary at her weirdest and most wonderful as she transforms into cookie dough and then gets baked.

Feel-good doesn’t quite cut is as a description for BLACKPINK and Selena Gomez’s “Ice Cream.” This is a candy-colored day dream with cute costumes, intricate choreography and an ice cream truck.

If this list was ranked by impact on pop culture, Cardi B and Megan Thee Stallion’s “WAP” would come out on top. This video sparked a political debate and brought the conversation about female sexuality to the mainstream. For that alone, it deserves all the props.

Effortlessly offbeat, Rina Sawayama took us into a world of magic potions (drained from a human) and malfunctioning robots in “XS” — and cemented herself as a pop heavyweight in the process.

Jennifer Lopez gave us a 9-minute epic about a double-crossing lover/FBI agent and glamorous business woman in this glamorous throwback to the blockbuster videos of the ’00s. I need a sequel.

Mother Monster goes full Jodorowsky in this brilliantly conceived trip inside the mind of a dying woman. After underwhelming (by her lofty standards) videos for “Stupid Love” and “Rain On Me,” this is a potent reminder that Lady Gaga hasn’t lost any of her edge.

Touching, thought-provoking and utterly unforgettable. Conan Gray’s “Heather” is a powerful treatise on obsession and identity that absolutely demands three and a half minutes of your time.

There’s something wonderfully retro about Black Eyed Peas’ “GIRL LIKE ME” video. In some ways, it’s a throwback to the group’s The E.N.D. aesthetic. Only this time, they bring Shakira along for the ride and the Queen of Latin Pop elevates the visual to high art on the strength of her charisma and star power alone.

Beyoncé’s Black Is King is the type of work that needs to seen in its entirety, but one of the film’s breakaway videos sums up everything great about it. “ALREADY” is a visually astonishing love letter to Africa with one hell of a soundtrack.

1. Mariah Carey — “Underneath The Stars”

Mariah Carey’s borderline mythological “Underneath The Stars” video finally surfaced in 2020, 24 years after it was released. The clip itself is a time capsule of the ’90s with our heroine listening to her CD walkman and soaking up the sights from her tour bus. For pure nostalgia alone, this comes out on top.

Mariah Carey Is The Queen Of Christmas
END_OF_DOCUMENT_TOKEN_TO_BE_REPLACED