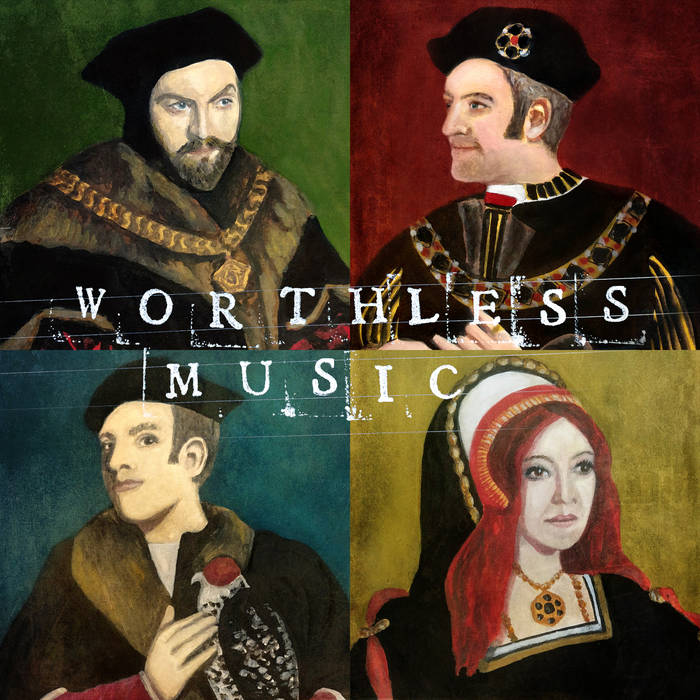 Huddersfield’s The Scaramanga Six may possibly – but delightfully – confuse the unsuspecting punter with their album cover work on this, their tenth album. There are four stunning medieval portraits of the band by artist Louise Atkinson, which might give the impression that they are some kind of early music act. Not that there would be anything wrong with that, but those expecting something in that vein would be somewhat taken aback.

Hopefully for the better…and you know why? So often there are those press releases that either state that the band’s influences are really hard to put down, and once in a blue moon that is actually true. This is one of those cases. So many bits and pieces fly past you at a furious rate that you find yourself thinking of The Fall and Faith No More in fairly short succession. Then you stop trying to clutch so much at influences and realise that rock music, for all its repeated cliches can offer something fresh and and daring without being pretentious, nor succumbing to novelty. Plenty of other acts should be taking note that this is how to do it. ‘I’m not beholden to anyone!‘ they sing on fantastic opener ‘Big Ideas.’ They really aren’t.

Take a track like ‘Cults,’ for example. During the course of little more than three minutes, it starts of sounding like Shellac meeting At The Drive-In. It then takes in shouty 90s indie and 60s harmonies before going back to the Shellac-Drive in combo.This really shouldn’t work, but it does, largely I suspect because the band are not trying to be clever, but just doing what comes naturally. Then they follow it up with an epic like ‘Death Mask Of The Unknown Lady Of The Seine.’ This actually manages to be as thrilling as its name, and flows on perfectly from the previous track. They worked with Steve Albini on 2013’s Phantom Head, which makes perfect sense if you’re new to them.

Sometimes records which pull this off will still get dubbed record collection rock, on the grounds that you can hear what their influences are. Here the difference is that the band are truly independent, ploughing their own furrow and not caring two hoots for a nervous A&R person whining that they ‘don’t hear a single.’ If perhaps one or two tracks being left off might have made the album feel even tighter, it’s not to take back what I have said.

Oh, and as for what I was saying at the beginning about things confusing the unsuspecting punter. It’s not just the cover art, but the title as well, which on first and then repeated playing reveals itself not to be self-effacing but snarkily ironic. It’s really anything but worthless, if that still needs spelling out. I don’t know why this band haven’t had more coverage and fame over their quarter-century plus, despite some excellent reviews but I suspect it doesn’t bother them. Fair play.