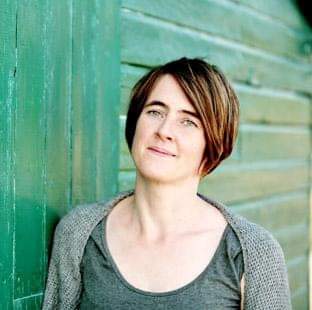 The last time this author saw Karine Polwart live was in late 2019. She was promoting her then-latest album Scottish Songbook, which focused on the previous fifty years of song in Scotland. It was a magical performance with a full band, and, amongst many highlights, she pulled off the feat of being joined by school children for a version of Lewis Capaldi’s ‘Someone Like You.’ On paper this might sound cloying but it was absolutely magical. Interviewing her some time before, she seemed to have a numerous projects on the go for the following twelve months.

Of course, we all know what happened next. Karine Polwart being Karine Polwart, she didn’t let the grass grow beneath her feet. One of many things she worked on over the intervening two years was her forthcoming album Still As You’re Sleeping. Recorded with and jointly credited to her friend and neighbour Dave Milligan, this album is just voice and piano, as is today’s performance.

After being starved of live music for eighteen months, it’s a relief to actually be here enjoying it again. Part of the Edinburgh International Festival, it’s socially distanced in a massive open plan plastic bubble. A simple stage, with just a piano and a couple of mikes. They open with a rendition of Alasdair Roberts‘ ‘The Old Man Of The Shells.’ It’s absolutely fantastic – Roberts’ version is underpinned by guitar and simple percussion, this version is brought to a different place with the piano. Despite the fact that there’s distant traffic, the spellbinding intensity of the performance is such that I swear you could hear a pin drop.

‘I hope you’ve not come expecting a party, it’s not that kind of vibe,’ Karine explains, almost apologetically. Yet it truly does not matter. The new album is a mixture of self-penned, traditional and other people’s songs, and that is what they give us. Part of the Pathhead music collective, the eponymous village south of Edinburgh, they play us ‘The Path That Winds Before Us’ which they dedicate to the village. There’s a nod to Michael Mara, with his song ‘Heaven’s Hound‘ and Dick Gaughan’s ‘Craigiehill‘ which she dedicates to her Grandfather and mother.

It’s impressive to note where she is as a performer and artist. Sometimes folk can be seen as being snobby, as much as what cannot be done, as what can, but as demonstrated with the Scottish Songbook project, she draws so many strands in that boundaries between genres blur, most pleasantly so. Those of us living in Scotland hear a lot of Robert Burns’ songs – even if we weren’t born here – and the version of ‘Ae Fond Kiss‘ is beautiful, without descending into sentimentality. It closes the forthcoming album. They finish the main performance with a song they wrote as a commission, a song based on his poem ‘Come Away In.’

Two other things that should be noted about this performance. Whilst Dave Milligan lets Karine do the talking, his piano playing is hugely emotive, the only musician on the stage he may be, but it’s as if he is a several piece band. Not only that, when we are invited to sing along, it feels almost spiritual, a spring after the endless winters of successive lockdowns.

As the concert ends, people are on their feet. An accomplished performance from two people who are master and mistress of their craft. If our appetites were not whetted for the forthcoming album before, they surely are now. If you haven’t experienced Karine Polwart live or on record, take the chance to experience her – and Dave Milligan when you can. This is not ghettoised folk, but something for all.