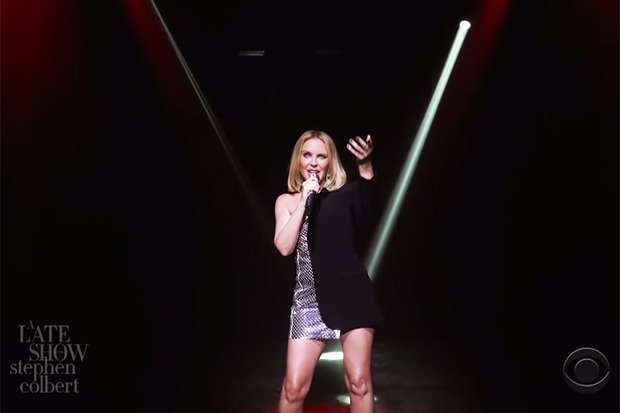 Kylie Minogue sure knows how to promote an album. Since releasing DISCO on Friday (November 6), the pop icon has been working double time to make sure as many people know about it as possible. In addition to an avalanche of magazine covers and TV interviews, the enduring hitmaker also broadcast a pioneering virtual concert, the magnificent INFINITE DISCO, and held a streaming party on Twitter. And her efforts are paying off. DISCO is pacing for number one in the UK and Australia, and even held to top spot on US iTunes for several days.

Her latest endeavor? Kylie squeezed into a shimmery, silver dress/blazer ensemble and belted out “Magic” on last night’s episode (November 11) of The Late Show With Stephen Colbert. As expected, the flawless 52-year-old absolutely nailed it with a feel-good rendition of the disco anthem against a simple, but effective projection. She also brought out a couple of dancers and gave fans a little twirl. It was elegant, nostalgic and very, very fun. Words that sum up this entire era. Watch Kylie in action below.