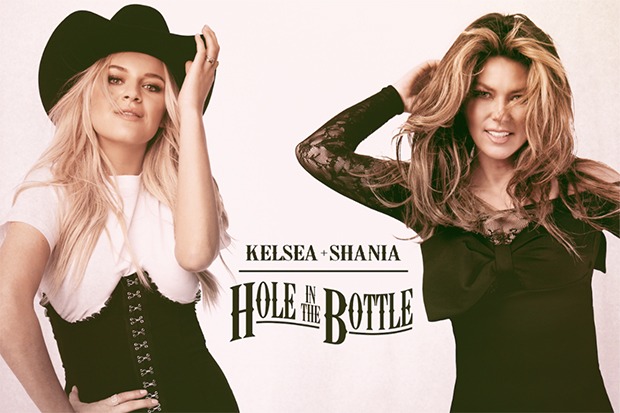 And they said we couldn’t have nice things in 2020! Kelsea Ballerini taps Shania Twain for a new version of “Hole In The Bottle,” the latest hit from her self-titled double album. After trading verses, the country queens come together on the all-too relatable chorus. “There’s a holе in the bottle leaking all this winе, it’s already empty and it ain’t even supper time,” they harmonize. “Honey, no, I don’t miss him — in fact, it slipped my mind.” There’s even a cute interlude in which Shania references one of her signature hits.

“They say don’t meet your heroes…unless your hero is Shania Twain,” Kelsea explains in the press release. “Then meet her, know her, and make music with her. She’s inspired me in every way and has become a mentor and friend and added some major sass and spice to ‘Hole In The Bottle,’ the way only Shania could.” The Come On Over legend is similarly chuffed about the collaboration. “Kelsea and I have had some fun laughs together over the last couple of years! She joined me on stage back in 2017 when I headlined Stagecoach.”

“We’ve had a chance to catch up over a glass of wine a couple of times since,” the Shania continues. “We’ve also sent pieces of songs back and forth to each other and I have to say, she’s an incredible raw talent. I love ‘Hole In The Bottle,’ it really speaks to my own sense of humor and it was so cool to get to do it with a friend.” See the announcement below. Kelsea and Shania’s “Hole In The Bottle” remix is officially released at midnight, so check back then to have a listen.

We're leakin' all this wine 🍷💥 Hole In The Bottle dropping Friday! 😘 @kelseaballerini