IN CONVERSATION: Joe and the Shitboys 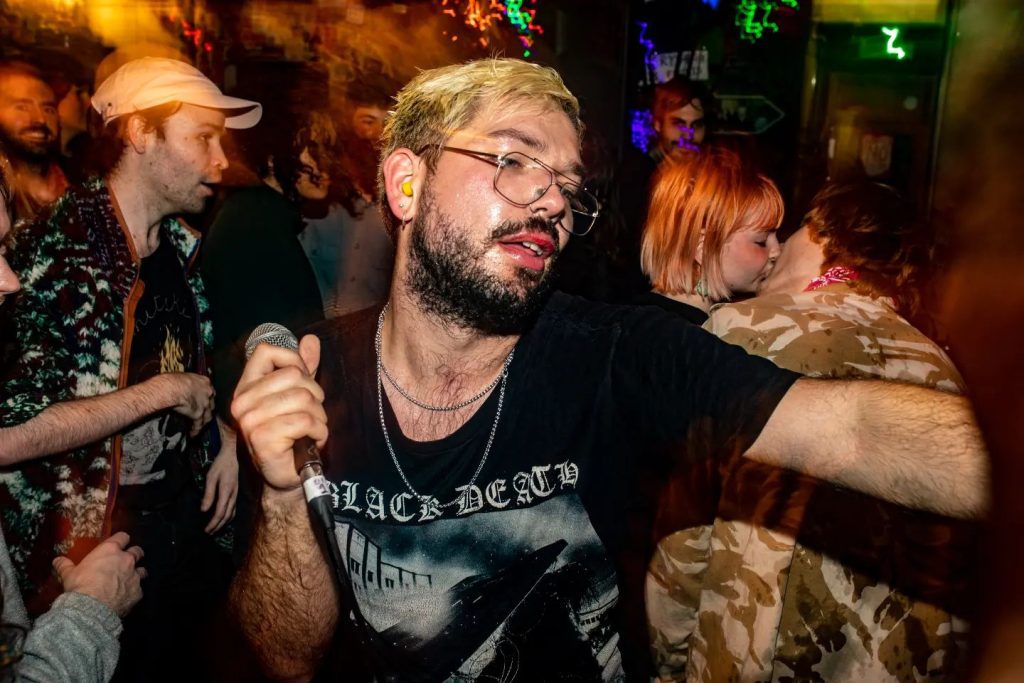 Joe and the Shitboys are much loved by Iggy Pop and get a play on his BBC Radio6 Music radio show most weeks. He renames them “Joe and the S Boys” for his late afternoon slot! The bisexual vegan hardcore punk band from the Faroe Islands have created quite a stir in the UK and, explains lead Shitboy Fríði Djurhuus, further afield.

GIITTV: Now that you have toured overseas including a couple of tours in the UK, when you go back to the Faroe Islands has that made any difference when you go home?
You get better than other people because you cannot play lots of gigs in the Faroe Islands, so you can’t really improve yourself. When you are touring you play gig after gig after gig and it seems like if you live in the UK you can play once a week at least without people getting tired of you. You just play in different places but here you can’t do that. “You play six times and everyone’s seen you twice” that what we usually say. We have so many talented musicians making great music but they don’t get the opportunity to improve themselves. Its happening a lot more since we’ve been going out more, in the UK market other Faroese bands are starting to get bookings around Europe.

Joe and the Shitboys had a busy 2022, where there any particular highlights?
It’s always playing at the Pride afterparty in the Faroes, that’s always a highlight. You know everybody, we’re all friends and we’re having a great party. It’s full of love. But playing Roskilde (festival in Denmark), that was huge. There was 2500 people I think, we’d never seen a crowd that big. Then after that we played the Lowlands festival in the Netherlands. I think that is probably my all time favourite gig. It was so so wild. There was 3000 people there. It was so weird because I tell 3,000 people to sit down and everyone is listening to me and WTF they are actually doing it! They don’t even think about it, they just do it! How do I have this power! Everyone was loving it and people were being so nice to each other, nice to us even though I was yelling at them. That’s my highlight.

Your gigs are unique, you combine serious messages in your music but also bring fun and energy, indeed you bring the hardcore vibes. Do you have to find an alter-ego in yourself?
I don’t think its an alter-ego. I think most people when they’re living their daily lives they have all these things that help keep them in check. And those things are great. The reason I change so much is that I let all these inhibitions go. I remember at one of my earliest gigs I forgot to pull myself back down again after the gig and someone came up to me and they were like “Oh you guys were great, I love your shit.” I’m like “yeah that’s cool, I don’t want to talk to you” and left. I have apologised to this person since! Its fun for me to not have to contain myself and allow myself to become this egomaniac in some sense, but its also fun for the audience. People don’t want to look at their next door neighbour, just standing about. Even though I remove all these inhibitions I like roasting people and I like getting it back as well. That’s how I am as a person. I’m also a very loving person, I like giving love and receiving love and an energetic person and I’ve figured out healthy outlets. So I remove all those inhibitions, and it spirals out of control sometimes but the move I uninhibit myself the more the audience is into it and that’s great. I don’t warm up before the gig, I guess I should but when its showtime its just like a switch. I wish I had advise for people because I know I’m good at it but I know I’m not a good singer and I compensate with the performance. It’s just a switch that goes off.

It’s great to still have this ability to connect with the audience, even though at times you are taking the piss. By the end everyone loves you even more.

I love the fact that your first album was called The Reson For Hardcore Vibes and the second The Reson For Hardcore Vibes (Again).  I’m wondering if the third album is going to called More Resons for Hardcore Vibes?
Album one and two were done the exact same way. Mixed by the same people, produced by the same people, recorded with the same gear, in the same room, with the same writing process. We recorded album one I think in October 2018 and two in December 2018 but it didn’t come out until 2021. We did the first one and it wasn’t all that serious at that point. Then we played at Iceland Airways and got all this traction, met our management, got a booking agent so we had to re-release the first one because we had done zero PR for it. It wasn’t supposed to go anywhere, it just our fun project to piss people off in the Faroes.

So is there going to be a third album in 2023?
Yes, we recorded it in August 2019 but we’ve done some re-recordings because it was before the Iceland Airways gig which was our proper starting point. Then it was still just us having a good time I really mean the things I say even, well sarcastically, so the message is still the same. Our ambition was to piss people off locally, we never expected it to work

Getting played by Iggy Pop, was that a way of getting more well-known particularly in the UK? Do you think it had an impact? What was the start of the UK journey do you think?
That was still Iceland Airways. Our booking agent wrote to us when we had just 300 followers on Instagram and we played an at capacity show of 450 people. I had written this bio for the journalists “Bisexual vegans from Faroes Islands” and that’s a journalists wet dream. Thats how we ended up in the NME and this booking agent decided to take a chance with us and sorted out all these gigs and pitch us to the proper places. We are so grateful for him, and we are so grateful for our management, they’re the best . With Iggy Pop it’s probably made it easier for those guys to pitch us. Probably a lot of people came to the gigs because they heard Iggy Pop talk about us.

And you’re off to Canada at the end of January 2023? Are they the first gigs for Joe and the Shitboys in 2023?
Yes, we’re doing six gigs in Canada, it’s going to be so cold! And after that we’re going to Norway for Trondheim Calling which is a showcase festival. There is a lot of other Faroese artists going to that. All the ones that are playing there are great so its very exciting.

Anything else you can share about 2023?
Album three which was recorded a bit differently. It’s gone to someone else for mixing so its not inhouse. Our former bassist mixed the first two albums. Its going to have a very different sound. It was a very intense recording session. With albums one and two we had breaks in between sessions. Album three was ten songs done in, I think, only eight hours but there is a lot of different stuff happening on album three. We are experimenting more with different vibes. Some stuff is more groovy, some stuff is more heavy. We’re still doing the fast songs. Some of the songs we’re already playing live and they really resonate with people. We’ve a bunch of dancier songs and with disco influences, because I think we were more comfortable doing album three. We can do a bunch of different stuff and still be shit punk.

I think it’s really important to give it your all (on stage). You have to respect people, they take the time to come to your show. Even if just say five people, they came to see you. They took time out of their day to come and see you. Everyone is so busy these days and if people actually show up you should respect that. I fucking hate it when bands are like “oh we’re too big for this and only so many people came”. Just fucking do it, you have to. To bands who are struggling with that you never know who is in the audience. Both for me in the band I was in before, and the Shitboys when they were in another band, both of our most important gigs before Shitboys, were in tiny spaces. I think for Daniel they got a manager from a gig that had seven people there, and for me there was 15 people and I got this big shot in Faroese media who took a liking to me. If it wasn’t for those tiny gigs the Shitboys probably wouldn’t exist.