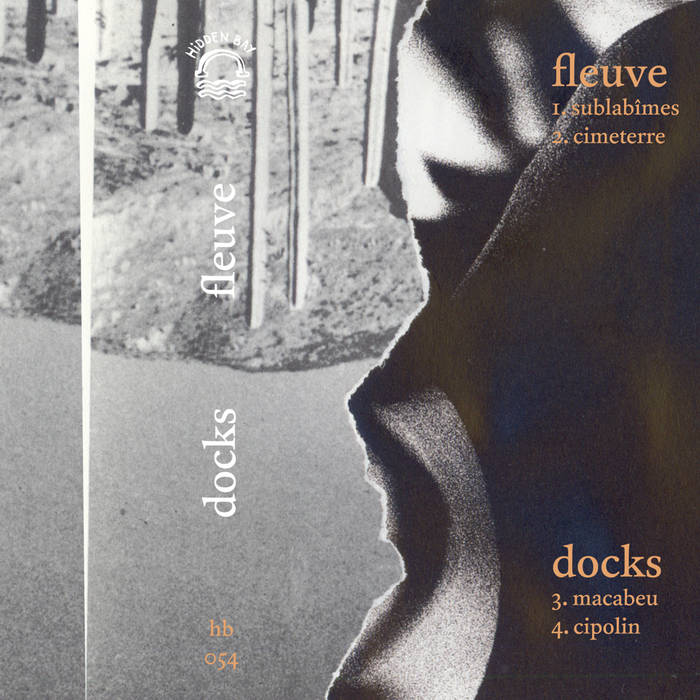 Its hard to believe there was a time before Hidden Bay. Of course, I know this to be false. The label has only been going since 2016, but in that time, they have gained the reputation for having their finger on the pulse. Since their inception they’ve put out tapes by The Cool Greenhouse, The Death of Pop, Whiteland, Trust Fund, Posse and Lumer. Recently Meager Benefits, Airu, Sam Forrest and Oi Boys have all been given their own HB catalogue numbers. Their latest release is a split cassette between Fleuve and Docks.

Musically Fleuve and Docks have a lot in common. They are both from France. Fleuve hail from Grenoble and Docks from Toulouse. While they aren’t part of the same scenes, they have a similar aesthetic. Both consist of two members, guitars, and drums, and use repetitive melodies and stark percussion. This creates a drone like vibe, where with each repetition their point is made again, and again. But here is where the differences end. Fleuve have a singer, while Docks don’t. Instead of telling emotive stories of love, loss and redemption with words, Docks use guitars. Manon Raupp and Daniel Selig trade chords and licks over metrical drums.

‘Sublabîmes’ kicks the cassette off in fine form. Fleuve deliver up thoughtful basslines and crisp guitars, but it’s the vocals that add an extra layer of texture. It gives you something to latch onto when the music, sadly, get pedestrian. However, halfway through ‘Sublabîmes’ the mood changes. The guitars have some extra crunch to them. Around this point the drumming goes up a notch and really draws you in. ‘Cimeterre’ carries on where ‘Sublabîmes’ left off, but it’s less mournful with an urgency that is hard to ignore. Then Docks take over the cassette. ‘Macabeu’ is an incredibly uplifting piece of music. Those opening guitar runs feel like the first glints of sun as you sit in an empty garden after a savage house party. The rays are warming and make you feel that any transgressions from the night before can be overcome. Then the main riff kicks in and we’re off to the races. It isn’t just the best track on the cassette but possibly the best thing Docks have ever released. And that’s saying something!

‘Split’ works incredibly well. Both bands compliment each other and there are no awkward clashes in sound as ‘Cimeterre’ ends and ‘Macabeu’ starts. However, this is also a point of issue. When listening to the EP on loop its hard to know which band is which, if you can’t see what’s playing. Yes, Fleuve have vocals and Docks don’t, but both use prolonged sections of instrumentation. This is just nit-picking on my behalf. At its heart ‘Split’ is a glorious collection of songs from two bands that are both on the cusp of greatness. Factor in that ‘Split’ is released on Hidden Bay and this is another solid release in a year of solid releases.