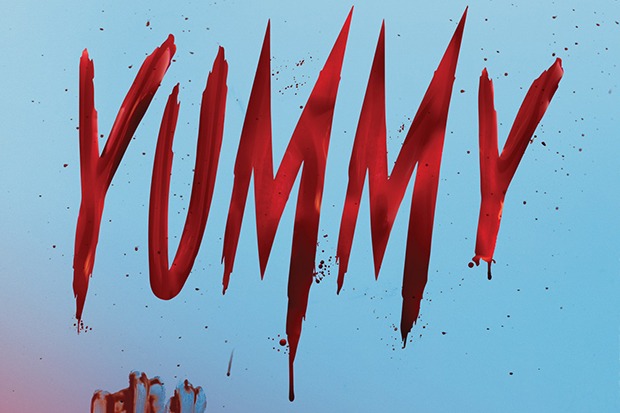 Just when you think you’ve seen every possible iteration of the zombie flick, Belgium’s Lars Damoiseaux goes and makes Yummy — a gory horror/comedy that unites the worlds of cannibalism and plastic-surgery tourism. If your interest is piqued, keep on reading. Everyone else should probably find something less niche to watch. However, those gore-hounds who do take the plunge will be rewarded with one of the nastiest, grossest and most consistently-outrageous horror debuts of 2020.

The plot couldn’t be more simple. Alison (an amiable Maaike Neuville) has something to get off her chest — namely, F cup breasts. Our heroine decides to travel to an unnamed Eastern European country to get them reduced at a hospital catering for international guests, and brings along her loyal boyfriend Michael (a sympathetic Bart Hollanders) and surgery-obsessed mother (Annick Christiaens). That’s a pretty solid setup for a horror film to begin with, but it becomes even more mouth-watering when we discover that the head surgeon is keeping a woman muzzled in an abandoned wing.

It doesn’t take long for the infected patient get loose and start wreaking havoc on the hospital’s clientele. Michael is the first to cotton on to the impending disaster, and he tries to navigate his way out of the hot zone with Alison, her mom and a handful of highly questionable hangers-on. In some ways, Yummy is reminiscent of latter entries in the REC series, where the tone is somewhat lighter and there is obvious relish in being as gross as possible. This is where Damoiseaux really shines.

At this point it’s hard to even imagine an original zombie kill — after all, there are only so many ways a face can be bitten off. However, by bringing zombies and plastic surgery together, the director conjures two demises I haven’t seen before; one involving a botched liposuction and an eye-wincing sequence in which a patient’s recently-enlarged penis is set on fire and then accidentally injured beyond repair. It’s a European production, so everything is show in excruciating detail. The film’s origin also explains the tone of the humor. Yummy revels in being politically incorrect, so prepare for some dubious one-liners.

As the film hurtles towards it’s conclusion (director Damoiseaux wastes little time with exposition), it becomes increasingly clear that Yummy is an early glimpse of a director with genuine passion for the horror genre and a hard-nosed approach that avoids sentimentality at all costs. The finale would never work in an American film, which is exactly what makes it so pleasing. If you love blood and guts, graphic nudity and all-around bad taste, Yummy comes highly recommended. Belgium’s first zombie flick is now streaming on Shudder.