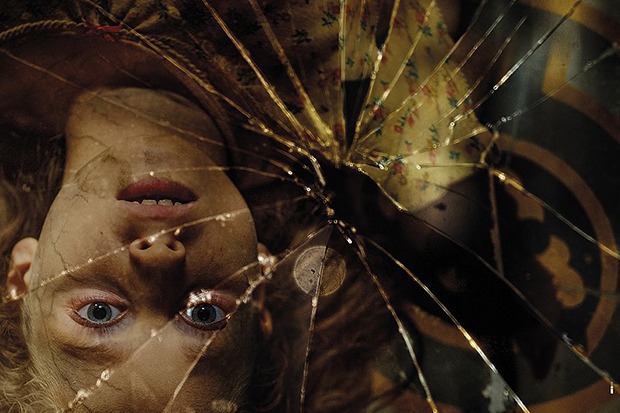 After being the horror capital of the world for most of the ’70s, the genre seems to have fallen out of favor in Italy. Which is a shame because they have a natural flair for it. Take The Binding (or Il Legame). Domenico Emanuele de Feudis’ directorial debut is an atmospheric, slow-burn chiller that skimps on neither scares nor style. There are pacing issues and plot holes, but this is one of the better options on Neflix for seekers of competent Halloween fare with a smattering of local culture.

The film begins with Francesco taking his fiancée, Emma, and her daughter to meet his mother. She lives on a run-down estate in southern Italy, where tradition rules and superstition runs riot. It soon becomes apparent that all is not as it seems at Mamma’s House. For starters, the trees are dying, granny’s best friend has deep scars etched into her arm and the family recites strange incantations before digging into their pasta. Emma is understandably perturbed, but Francesco assures his future wife that all is well. It isn’t.

Emma’s young daughter is bitten by a giant spider and starts to exhibit questionable behavior. Instead of rushing her to a doctor, Francesco’s mom insists on treating the wound with special herbs and a little black magic. After all, she knows something that the child’s worried mother does not. Namely, that Francesco’s former girlfriend (who is possibly dead and lives in a nearby cave) has placed a curse — or binding spell — on the girl. It turns out that Francesco wronged her 20 years earlier, and she is intent on revenge.

From this point on, The Binding plays like an Italian Blumhouse production. Which is not a bad thing. The scares are predictable (if well-executed) and the twists and turns are easy enough to see coming. The stunning location, eerie score and the lore surrounding the curse, however, more than compensate for the familiarity of the denouement. And then there are the performances. Riccardo Scamarcio, best known to US audiences as mob boss Santino D’Antonio in John Wick 2, and the luminous Mía Maestro (you will recognize her from The Strain) are both excellent.

If the concepts like curses, revenge and astral traveling into a witch’s den grab your attention, The Binding is well worth 90 minutes of your time. It does take a degree of patience, however, as more time is dedicated to character development and local color than in an American production. All in all, Domenico Emanuele de Feudis’ feature debut is sufficiently creepy and just different enough to garner attention on the world stage.