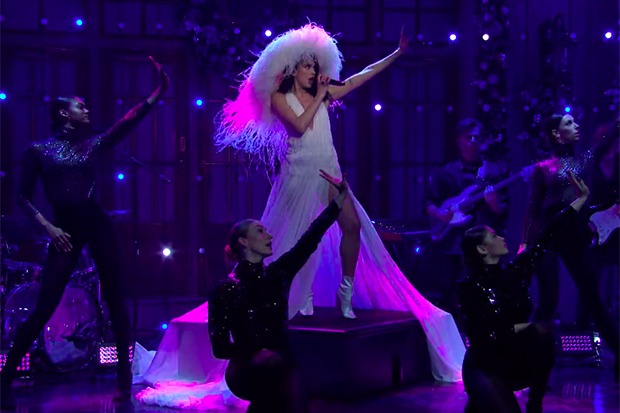 Dua Lipa is having a better 2020 than you. That, dear reader, is just a fact. The Brit began the year entrenched in the upper reaches of the Billboard Hot 100 with “Don’t Start Now” and then followed it up with a string of hits including “Physical,” “Break My Heart” and “Levitating.” They all feature on her critically-adored Future Nostalgia, which was remixed into Club Future Nostalgia by The Blessed Madonna. If that wasn’t enough winning, the 25-year-old nabbed six Grammy nominations.

The all-conquering pop star now winds up her year with a pair of blistering performances on Saturday Night Live. She began with a sultry rendition of “Don’t Start Now,” which she dressed up with a little choreography, and then upped the ante with “Levitating.” Dua performed the song on a podium in a long, white, flowing dress and feathery headpiece, which captured the pink and purple lighting. It was visually stunning and immediately went viral on Twitter. Watch Dua strut her stuff below.