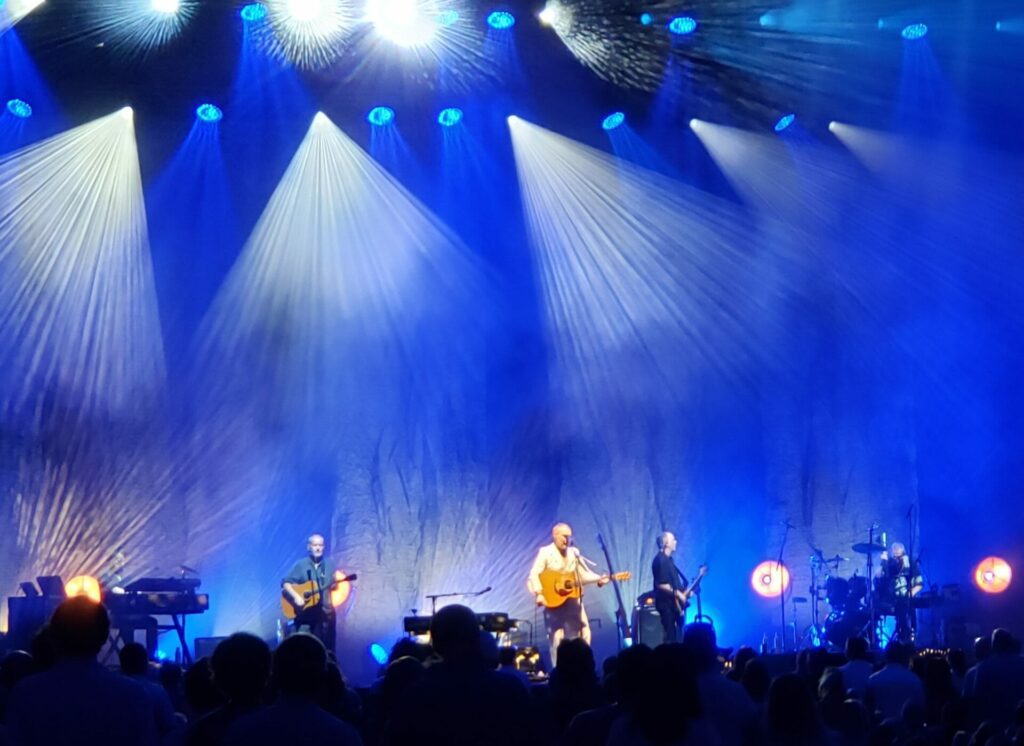 photo credit: Lydia London***Wrapping up the North American leg of his White Ladder: The 20th Anniversary tour, David Gray delivered an instantly classic performance at Boston’s Leader Bank Pavilion, with arguably one of the best concert appearances by any singer-songwriter of the past two decades.  Really, the entire run has been a glowing success, as Gray’s finally been able to celebrate his star-making album after two years of pandemic-delayed scheduling.  The decorated, multi-platinum British artist certainly appreciated the moment, giving a two-and-a-half-hour finale highlighted by a full rendition of White Ladder, and a brilliant six-song encore.While it was no secret that Gray and his vastly talented ensemble would perform the breakthrough record in its entirety, what remained in flux from night to night on the summer trek was the first set of Gray nuggets.  Selected mostly from the post-Ladder catalog of the alt-folk progenitor, the opening hour on this late August Saturday night touched off with a rollicking pair of favorites: “You’re the World to Me” and “The One I Love.”  Gray also worked a few surprises into the nine-song mix, including the haunting “Kathleen,” as well as “Heart and Soul;” the latter from his under-the-radar 2021 release, Skellig.Understandably, the main event was the second-set reading of White Ladder, performed in sequence, and featuring, on drums, Craig “Clune” McClune.  Clune, a longtime collaborator and vital creative partner, split with Gray in 2007.  Now reunited after 15 years, the duo was awash in smiles, delighting the packed house with one inspired flourish after another.Beginning with two of White Ladder’s now iconic hits–“Please Forgive Me” and “Babylon”- -the white-suited frontman and his four-piece band hugged the original arrangements closely, peppered in spots with a rowdy Gray imploring the Boston crowd to join him in singing along.  The album’s final track- the Soft Cell cover “Say Hello Wave Goodbye”- led to the first of essentially six encores, beginning with the Soft Cell-adopted “Tainted Love.”  After the animated bop of that ‘80s nod, Gray launched into a humbling and heartfelt recollection from the early days of White Ladder’s unexpected ascension. He told, both humorously and sincerely, of his debut appearance at the Glastonbury Festival in 2000, his ailing father’s surprise turn-up at the fest, Burt Bacharach’s Frisbee injury, and a serendipitous meeting with David Bowie.  Then, Gray and his group honored the late rock legend with a dazzling pair of Bowie covers: “Life on Mars?” and “Oh! You Pretty Things,” dovetailing the latter into a reprise of “Please Forgive Me.”  Gray still had more to give, returning solo on acoustic guitar for an impassioned and beautifully sung “Shine,” then was rejoined by his mates for a closing run of The Cure’s “In Between Days.”With a potent combination of stirring energy and matured reverence, David Gray and his band did something not nearly as easily accomplished as it may sound: They paid tribute to their own music without a hint of revisionism or self-congratulations.  They too seemed as appreciative of and indebted to that starburst two decades ago as the audience was to relive it.  Yet, instead of simply dialing back time, they brought all of their subsequent experience and gratitude forward with them, giving White Ladder, and themselves, a joyous, renewing, and deserved anniversary.