Creamery Station: Walk With Me 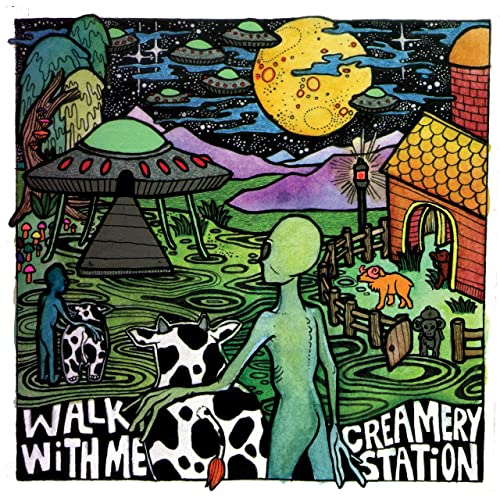 The first track on Creamery Station’s Walk With Me, “Pistol by My Side,” serves as a fitting invocation to a debut record. The rollicking tune boasts solos from keyboardist Jon Truelson, guitarist Jim Kader, harmonica player Don DeStefano and lapsteel guitarist Bobby Pickett, establishing the ensemble as more than capable of navigating the potential hiccups of balancing eight musicians in the studio. While some songs, such as the second track, “Jimszamar,” can occasionally sound a bit crowded, on most others, like “Heaven Looks Down,” the layers of instruments only add to the overall power. Additionally, the band’s four vocalists, Dylan Kader, Harry Cooper, Pickett and Truelson, are clearly skilled at crafting satisfying harmonies, especially on standout numbers like “I’d Be Pleased.”While Walk With Me is Creamery Station’s is first studio release, the album quickly proves that the New England-based roots-jamband are already a well-oiled machine. Perhaps that’s due to the band’s time onstage; during their four years as an active group, Creamery Station has appeared alongside veteran acts such as Max Creek, Melvin Seals & JGB, Keller Williams and many others.But, while that live energy drives Walk With Me, the ensemble also use their surroundings to their advantage, pacing the set like a classic LP. Shorter selections like “Fernwood” and “Dan the Outlaw” juxtapose nicely against jammier numbers such as “Wake Again” and “Those Days.” And the record’s finale, “Show You the Way,” is a perfect solo-filled sendoff—both melancholic and optimistic—begging for that metaphorical encore.