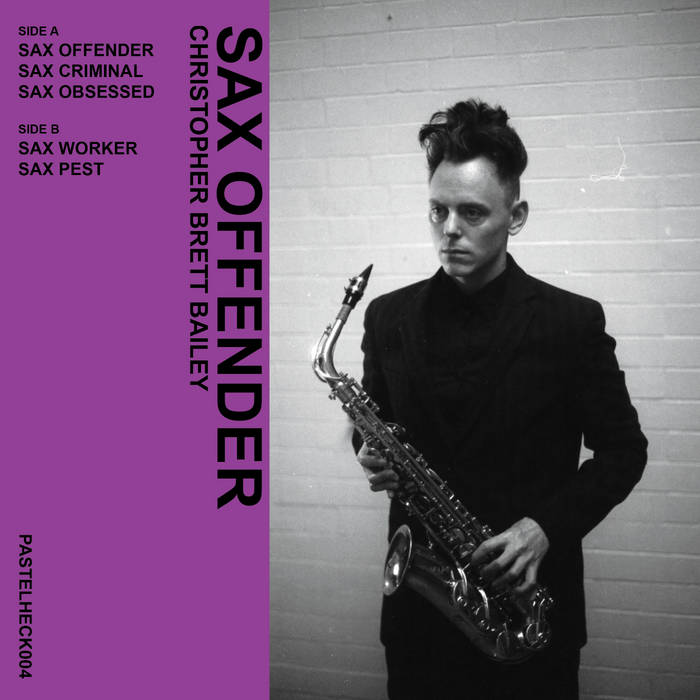 As I write this, I am in a bed on a faux Centre Parks in Devon. It is just before 7am. The sky is bright but overcast. I can hear the gentle chirps of birds over the music. It reminds me of camping holidays when I was a kid. Waking up early but not wanting to wake my sleeping parents next to me. So, I lay there in a state of frustration and contemplation. My morning is being soundtracks by these Christopher Brett Bailey albums. I’m listening to Bailey for two reasons. The first is so I can write this review. The second is that I would have picked these albums anyway as they totally match my mood and setting.

This is the Bailey that we’ve become used to over the year. His scatter-shot poetry is absent. In its place we have improvised pieces. They still contain the power, and in places venom, of his spoken word diatribes, but the music is 100% instrumental. Sax Criminal is a direct follow up to 2019s Sax Offender. That album consisted of five improvisations on saxophone with effects pedals. The tracks titles were all puns around the same theme ‘Sax Offender’, ‘Sax Criminal’, ‘Sax Obsessed’, ‘Sax Worker’ and ‘Sax Pest’. It sounded like the score to a film noir in which nothing really happens, but the plot revolves around shots of eyes in cars with the rear-view mirror reflected on them. People sitting in cafés drinking steaming drinks while smoking, and a final shoot down in the local dilapidated docks. All of this on ‘Sax Criminal.’

The album opens with ‘Sax Scandal’. As with the original, the music is slow moving and deliberate. Bailey creates wonderfully elongated drones. It is drenched in reverb, giving the music a sensual feeling. This combination of menace and compassion works incredibly well, as at every given moment you expect the music to explode from the speakers. Engulfing you in vitriol. It reminds me of being a teenager out with friends. We’d bump into very nasty people who were battered. At any moment, their mood could change, and we’d be a stain on the high-street, but we were. Afterwards we’d feel exhilarated that we didn’t get a beating, but also exhausted as the situation was draining.

The standout track is ‘Sax Slave’. Here Bailey really starts to turn the screw. The tension is ratchetted up through the effects pedals. Dense fugs of sound are emitted from the speakers. The outro features a beautifully disjointed solo. It takes you by surprise and adds an extra layer of texture to the song. ‘Sax Pot’ is the shortest track at just over two-minutes. It feels like a continuation of the end of ‘Sax Slave’. Sharp, shroky, notes are played to create a feeling of disorientation. ‘Sax as Opposed to Gender’ ends as the album started. Completing the no wave adjacent cycle.

If Sax Criminal was the soundtrack to a gritty noir, then ‘In the Valley of Wow and Flutter’ is pure sci-fi. The change in the music is noticeable. All of the oppression of Sax Criminal has been removed. In its place are bright keyboards and shimmering melodies that have a translucent quality to them. On Sax Criminal you could barely see your hand through the music, but here everything is well defined and in HD. ‘In the Valley of Wow and Flutter (Part 1)’ opens with elegant melodies. These are underpinned by wonky synths and swirling motifs. It’s glorious. As the music undulates along, we are gracefully buffeted this way and that until we’re dizzy and doused in kaleidoscopic colours. It is reminiscent of the end of Stanley Kubrick’s ‘2001: A Space Odyssey’, except played at a slower speed and with less freak-outs. There are moments when Bailey adds more abrasive layers to it, but mostly it’s like this. And this is great.

At times, the music reminds me of Alex Empire’s underrated 1996 release Hypermodern Jazz 2000.5. This might be more to do with the alien on the cover than the actual music, but Bailey has created music that has a hazy warmth to it. The melodies kind of nudge up against you, giving you a pleasant glow. ‘In the Valley of Wow and Flutter (Part 2)’and ‘In the Valley of Wow and Flutter (Part 3)’ feature a more sombre tone. Everything feels more subdued. This is a great change of tone. If the music had continued as it started it might have started to get tiresome, or boring, but now everything has been taken down a notch. Our buoyant mood has been lowered and we’re stuck in deep space after the euphoria of take-off/initially flying through the cosmos. Despite the change in tone, the music isn’t oppressive. It is hopeful. Bailey feels to be lamenting something but what it is, he isn’t telling. The album ends with ‘In the Valley of Wow and Flutter (Part 4)’. The album has gone full circle and we are back to the good time vibes of the opener.

What Sax Criminal and In the Valley of Wow and Flutter show is that Bailey can create a deep emotive feeling regardless of whether he uses words or not. They showcase an artist who isn’t just good at throwing together groups of words to tell complex stories; he can also do it with melodies. At no point during either album am I waiting for the words to kick in. Nor by the end have I missed them. Instead, we have two fully formed microcosms of music. Each is its own thing, and was created independently of the other, but combined we have something else entirely. Rumour has it that Bailey is working on a This Machine Won’t Kill Fascists and It Might Get You Laid album. If/when this comes out it’ll be cause for celebration, but before that auspicious day we’ll have to settle with these, and his other releases.

Its not late enough for me to get up and work out what to do with the day. It will probably involve petting farm animals and ice creams. While this goes on, my mind will focus on what I’m doing, but a small section of it will be playing sections of these albums as my inner score.