Andy Macleod – Anoint My Head: How I Failed To Make It As A Britpop Indie Rock Star (Pointy Books) 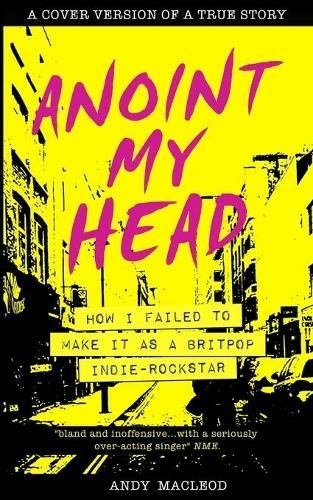 Wait a minute, The Pointy Birds? Who?

Andy Macleod’s memoir about the time his band never made it is a joy to behold. A tragicomedy of sorts, you simply can’t help yourself being transfixed throughout, and, if you’re anything like me, by reading this book, you too will experience the searing highs and the ever more crushing lows of The Pointy Birds as their members humiliate themselves on an open mic comedy night, are upstaged by an eccentric Ninja Frenchman, achieve a brief but unflattering review in NME,  play some top venues and toilets alike with varying results and have a brush with a psychopathic student film director. Oh, and did I mention that a certain Ricky Gervais was their manager?

I was in stitches on many occasions while reading Andy’s recollections of the drudgery he endured filing vinyl at Selectadisc (acquiring the nickname Horace in the process), and his unwavering belief that, yes, The Pointy Birds were absolutely going to be the next big thing, with a scathing imagined rivalry between his band and, first Blur, and then later, Echobelly. Oh, for the brazen certainty of youth. I can relate to it only too well. There’s even a video of me on YouTube somewhere, talking about my OWN band, where, in the end, I am heard to say “This band night’s going to be shit,” and when the interviewer asks why, I arrogantly sneer “because all the bands here are shit apart from us!” – I GET it, I really do. Some of this stuff is PAINFULLY similar to my own experiences in bands. Especially the endless gigs where barely anybody turned up!

Reading about Ricky was fascinating. He sounds, to all intents and purposes, exactly how you would expect Ricky Gervais to be. But he did manage to make things happen, to an extent, for The Pointy Birds. It’s just that some of it was perhaps, shall we say, ‘misguided’, although there’s little doubt that he was a shining beacon of positivity for the band even in their darkest moments. I found that quite heartening, despite the band’s clear reservations about him. It wasn’t just about the gigs and the mishaps though – some of the highlights of Anoint My Head come with the bonding of bandmates/flatmates and colleagues alike and the raw excitement of what might lie ahead.

There’s no better feeling than performing a successful gig to a packed house, and if you’ve ever been in a band, this book is a must, as the euphoria is palpable and contagious in those few occasions where it did, indeed, look like The Pointy Birds might be in with a shot of joining the Britpop elite.

I don’t want to give away too much else, really, as to do so would spoil the many surprises within, many of them hysterically funny. So all I WILL say is that if This Is Spinal Tap is the quintessential rock mockumentary, Anoint My Head is the closest you’ll get to that in book form. Except that this time, it’s all true!

Maybe in a parallel universe, the band would have gone on to achieve those fantastical ‘three A’s’ (read the book!). One thing’s for sure though – even then, they would have had to change that appalling band name!

An A+ read. Cracking stuff.

*There are no Pointy Birds songs available on YouTube, although you will be directed to a page to get a free song download of ‘Benefit Office‘ when you buy the book. So instead, here’s a Blur song that’s very relevant to it…