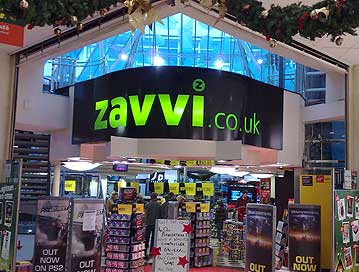 Happy Christmas! Zavvi has gone into admin­is­tra­tion, with 2500 jobs on the line and the immediate future of British music looking VERY SHODDY.

(International readers: Zavvi is/was one of the UK’s biggest enter­tain­ment retail chains alongside HMV etc — it took over the Virgin Megastore shops last year with 130 stores through­out the UK and Ireland.)

You can complain about Zavvi as much as you like — and we have done — but its dis­ap­pear­ance from high streets is terrible for music. With Woolworths also going, it means that super­mar­kets will overnight become even more powerful not just at dictating what music people buy but also — this is the important bit — which artists record labels sign and what music they produce.

Supermarkets running the British music industry is good news if you’re in Il Divo, or if you’re Duffy, or if it’s your job to keep repack­aging the same 400 songs in an endless cycle of Valentine’s Day / Mothering Sunday / Love At The Movies com­pil­a­tions, or if your idea of altern­at­ive music is the new Razorlight album. But if you like anything else, or if you’re a current or future popstar making anything else, you are in for a difficult few years as major label A&R depart­ments aim for the lowest, blandest, risk-freeiest common denom­in­ator options, and a gen­er­a­tion of future music fans grows up listening to the results.

Tower, Fopp, Our Price, Woolworths, all the other inde­pend­ent places you used to buy music in a few years ago, now Zavvi: gone. What a load of old shit.