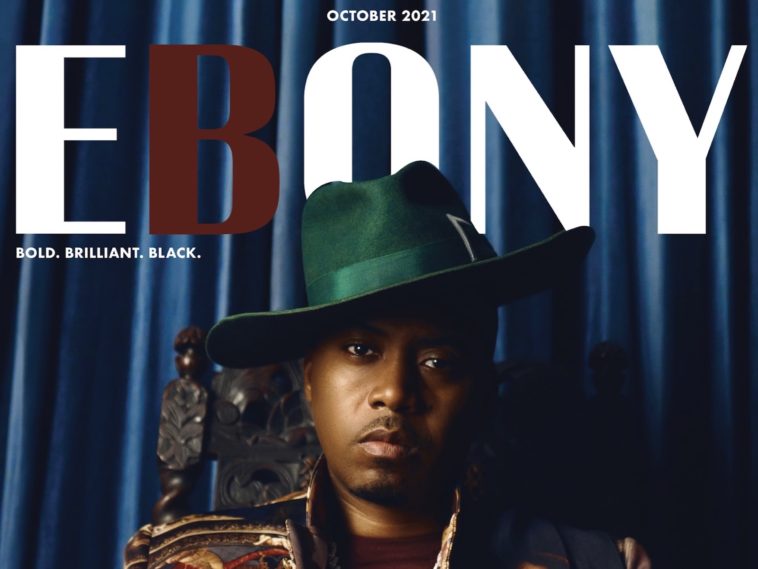 Within the cover feature, Nas doesn’t hold back on sharing his state of mind on a range of topics. The 48-year-old talks about COVID-19, his rap game run and more in the new issue.

For the cover story, Nas talks with acclaimed journalist Miles Marshall Lewis about everything from building generational wealth, how hip-hop has played a part in increasing Black wealth, his personal battle with COVID and, of course his vast musical legacy and how he continues to stay relevant in the ever-changing hip-hop game. I’ve included a few excerpts in the release.

There are also details on what exactly Nas is wearing on the issue along with the person responsible for his fit.

On the cover, Nas dons his classic QB chain and a beautiful one-of-one overcoat created by Nigerian-American designer Walé Oyéjidé of Ikiré Jones, whose designs were showcased in Black Panther  and Coming 2 America and who has become widely known for producing pieces that reimagine classical European artworks with African protagonists.

Nas Responds To All The Birthday Love

Earlier in the week, Nasir Jones hit up Instagram with a snapshot of how well-groomed he’s looking in 2021. Instead of responding individually, God’s Son used the opportunity to shout-out everyone sending him birthday attention on his 48th birthday.

“It’s not enough words, I hope Thank You will suffice. God is The Greatest. #Humbled”

The post’s comments section ignited with high-profile shout-outs including remarks from his close-friend Hit-Boy and producer DJ Khaled.

This week, Nas took a moment to remember the life of late rap icon Tupac Shakur.

Nas Has Entered The Cigar Industry

Outside of his birthday, the rap star recently added a new venture to his business portfolio. The hip-hop icon is now the co-owner of premium Nicaraguan cigar company Escobar Cigars, and spoke about the opportunity in a press release.

“When the team at Escobar Cigars initially approached me, I was immediately drawn to the brand by the exceptional quality of their product. This partnership with Escobar has been almost two years in the making and I am honored to be an equity partner with them. I am looking forward to growing this brand and to giving back to the local communities in Nicaragua where our tobacco is grown, aged, and hand-rolled into a premium cigar.”

The New York native recently had his mind elsewhere though, as both him and Ice-T were paying respect to a longtime friend and industry veteran. The hip-hop pair have shared condolences after Equal Standard writer/producer Joseph “Taheim” Bryan had his life taken from him through gun violence.

Nasir Jones went to his Instagram page to remember Bryan. The Queens native shared a pic of himself alongside Taheim holding onto a promotional poster.

“Speechless. Rest In Peace Taheim (in red) Most high is the best knower. 🕊 👑 One Of The Bridge Finest. My condolences to the family. Love”

Ice-T had a tougher time dealing with the fatal shooting. T specifically took aim at the people responsible for ending Taheim’s life.

On a lighter topic, Nas recently stepped up to alert the world his newly released King’s Disease II studio album was back on top.

Nasir Jones went to his Instagram page to break some major news. The Queens native shared footage of himself catching vibes and revealing he has the top rap album in the nation.

“Haaa real copies dropping soon. #repost • @mikeruga THIS NEW @nas ALBUM GOT ME OUT HERE ACTING LIKE A BOOTLEGGER IN 2004 ! 😩🔥 #NasIsGood #KD2”