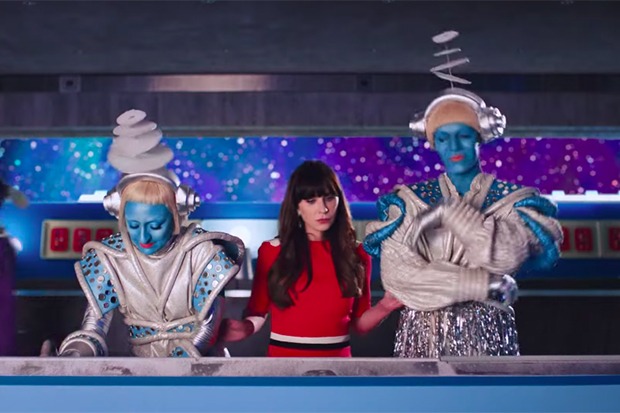 Katy Perry really is pop’s MVP. A global pandemic and the birth of her first child couldn’t stop the superstar for delivering a good, old-fashioned pop era. The 36-year-old now closes out 2020 by giving fans one last tasty tidbit. Namely, the visual for Smile highlight “Not The End Of The World.” Starring Zooey Deschanel and directed by female duo Similar But Different, the clip makes fun of the long-running joke of Katy being mistaken for Zooey (and vice versa). Only this time, aliens make the miscalculation!

“You can catch a star if the sky is falling down, there’s a golden lining up in every single cloud,” the pop icon sings in the first verse. “You can take a frown, turn it all the way around.” That takes us to the anthemic chorus. “It’s not the end of the world, no, not the end of the world,” Katy belts. “Throw on your fancy attire, fears in the fire — don’t lose hope!” In more ways that one, “Not The End Of The World” is a timely banger that rings especially true in 2020. Watch the blockbuster video.