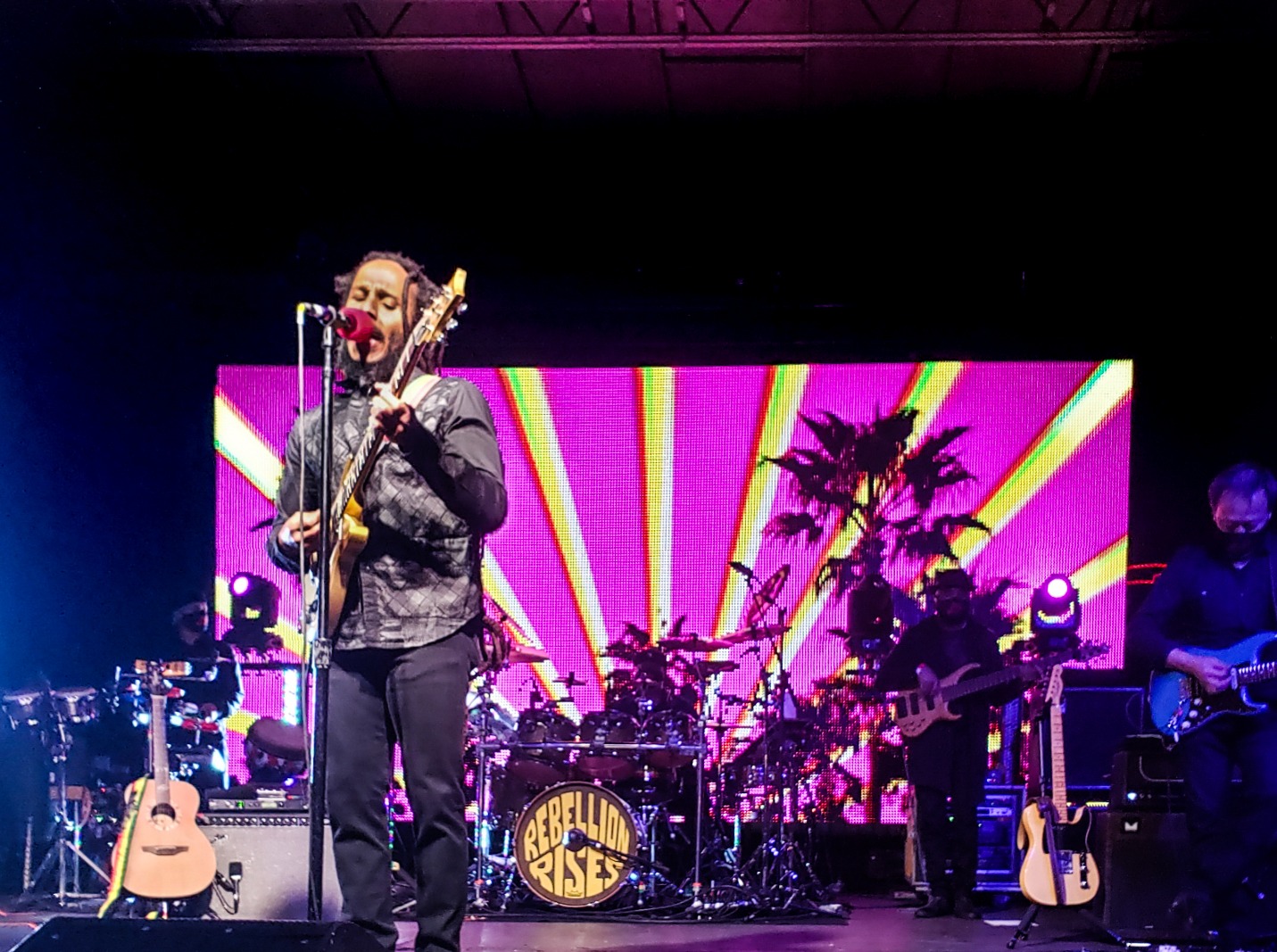 It was a week of firsts for Ziggy Marley. Five days before his sold-out Drive-In OC appearance at the City National Grove of Anaheim, the Jamaican-born reggae icon cast his vote for the first time as an American citizen; in an online video Marley documented the handoff of his mail-in ballot to a local Los Angeles postman. Then, to the armada of vehicles parked in the shadow of Angel Stadium on a seasonable autumn evening in Southern California, he announced that this was his first drive-in show, after the suitably sanguine opener, “I Will Be Glad.”
They were signs of the times- a masked Marley delivering his ballot; his masked band joining him onstage to play to honks and flashing headlights- that, if nothing else, showed Ziggy’s willingness to find a way to engage, to connect as more than just Saturday night entertainment. No question, the affable Grammy winner is among many performers walking the line between safety and show. The Anaheim concert, with Marley some 30 feet from the nearest spectator, did its level best to make this all feel normal. No question, either, that the 300 carloads were glad he was there, too.
Making their second appearance of the day at the makeshift venue- Ziggy hosted a family-friendly afternoon matinee in support of his most recent More Family Time album- Marley and his seven-piece ensemble were charged and sharp, palpably itchy to play live again after a lost summer. The two-hour set was front-loaded with anthems of love, including “Love is My Religion,” and its now-familiar coda referencing The Beatles’ “All You Need Is Love,” as well as a nod to Marley’s late father, Bob, on “Is This Love,” in a year of celebrating the legend’s 75th birthday. Alternating between brighter themes of affection- whether “Beach in Hawaii” or “Could You Be Loved”- and more recent calls to action that reflect Marley’s current political and socially conscious intents, such as “Rebellion Rises” and “We Are The People,” it was Ziggy, front and center, imploring with obvious gravity the need for both motion and emotion.
A closing “Look Who’s Dancing” reminded all that Marley has been making this case consistently and effusively for over three decades now. He returned for an encore; a three-song workout that almost felt like a second set, wrapping up his dreadlocked discourse first with another homage to Bob on “Positive Vibration,” then the always-buoyant “True to Myself,” and finally with a provocative, extended offering of “Justice” that zagged into fragments of “War” and “Get Up Stand Up.” If Marley began the night simply happy to be back on the stage, he finished it with a pointed, clear, and energetic rallying cry to his masses, even if safely confined to their parking lot spaces.Please enjoy this full-length feature from our September Issue. Not a subscriber? Show your support for only $2/month