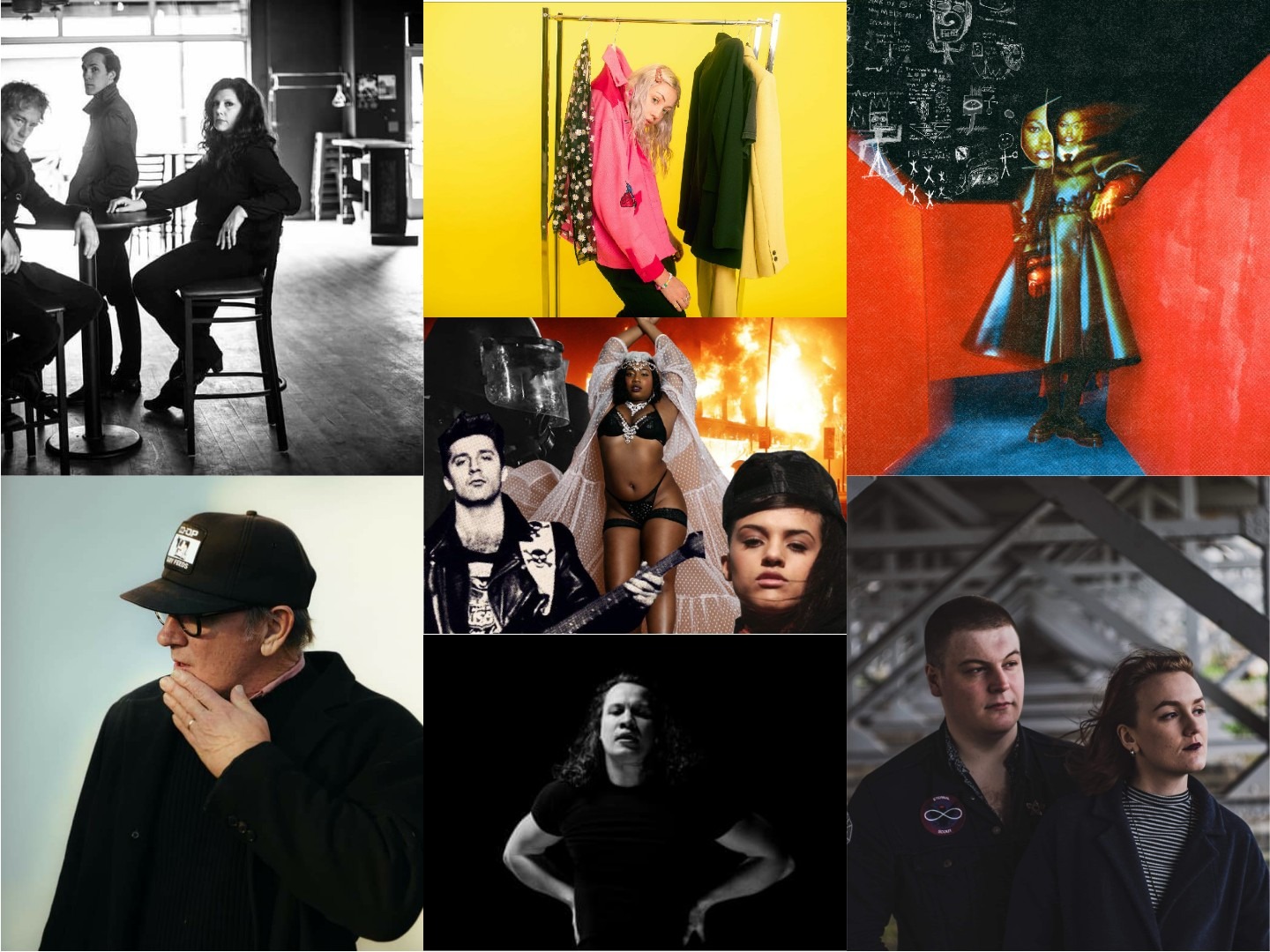 Why we love it:  RudeGRL & CC will release their explosive new EP Killer 16 this week via Firefly, ‘Like Wow’ the lead track is a powerful and kinetic cut that ripples with Rude GRL’s fiery bars, that seethes with energy, wit and a release of frustration above Constantinou’s scything guitars and frenetic beats.

Bringing together singer-songwriter and MC Jenna Dickens aka Rude GRL, burlesque star Bunni Morretto and Chris Constantinou, who started out as Adam Ant’s bassist, as well as collaborating and writing with the likes of Annabella Lwin (Bow Wow Wow), Sinead O Connor, Lou Reed, The Wolfmen, The Mutants, and more.
(Bill Cummings)

Why we love it: On Account of Exile Vol. 1 is the second album from the Illinois singer-songwriter Trevor Sensor (due out 18th June on High Black Desert Records) and ‘Chiron, Galactus’ is the lead single to be taken from it. Inspired by the 2018 revenge horror film Mandy, and having written the song in less than an hour after watching the movie, Sensor says that ‘Chiron, Galactus’ is “one of those magic songs that just comes to you. You become a vehicle for whatever strange power that’s out there to work through you. Some deep melancholic anguish rose up in me, and everything came out fully formed. The pain was not subjective, but shared.” Emerging from a place of relative calm, ‘Chiron, Galactus’ and Trevor Sensor both erupt into a state of unbridled intensity and rage before retreating back from whence they sonically came. Powerful stuff. (Simon Godley)

Lauran Hibberd – How Am I Still Alive?

Why we love it: Lauran Hibberd rousing lockdown anthem ‘How Am I Still Alive?’ was released recently. This sea sawing slacker anthem pairs sardonic and introspective couplets with rousing fuzz guitar smeared choruses that burst with a sense of frustration of hopes and dreams denied, it recalls both Beach Bunny and Katy Perry. Hook laden, addictive and playful it’s the second track taken from her upcoming ‘Goober’ EP arriving July 30th. (Bill Cummings)

“The video is a collection of (lockdown available) ideas, a transatlantic home video with animation seemed to be the only way we could get Lydia and I side by side”, reveals the Isle of Wight artist. “It’s based on documenting your every sleepless move (in the home video footage), whilst having your maddest thoughts and dreams (in the animation). I think it summarises how weird it is to live in a shutdown world right now and where our minds go throughout.”

Why we love it: ‘Cutthroat Friends’ is the debut single from the emerging Cardiff-based band Nine Lives. The duo of Hero Fancett on drums and guitarist/frontman Topher Hughes kick up a veritable incendiary storm here in the best garage-rock tradition. The song leaps straight out of the traps with snarling intent, straining sinews and busting a gut to get where it wants to go. And propelled along its path by a brutish riff and some fiercely dynamic drumming ‘Cutthroat Friends’ readily achieves its objective, cleverly fusing invective with melody as it does so. (Simon Godley)

Why we love it: Surely everyone knows by now that Bob Dylan turns 80 next month. An avalanche of books, memorabilia and music has already been produced to celebrate the occasion. One such piece of music is Low’s cover of the Dylan classic ‘Knockin’ On Heaven’s Door’. Written for the soundtrack of the 1973 film Pat Garrett and Billy The Kid, here the band from Dylan’s hometown of Duluth in Minnesota capture perfectly the regret and resignation which lie at the very heart of the song with Mimi Parker’s haunting voice adding another celestial dimension to the original. (Simon Godley)

Why we love it: ‘Fuku’ is the second track to appear from Lambchop’s forthcoming album, Showtunes. Speaking about ‘Fuku’ and the mini-film that accompanies it, Lambchop’s leader and frontman Kurt Wagner says “There is a theatricality to the song which is a thread that runs through the Showtunes idea. Doug Anderson (who conceived and directed the mini-film) responded to that like a cat to catnip. On first viewing, the visual might appear a bit unusual, foreign even, but trust me, it could have been a lot weirder.”

Taken from a record described by Kurt Wagner as “show tunes for people who don’t like show tunes”, ‘Fuku’ takes us beyond the outer chambers of that musical genre’s more conventional design. Abstract in its construct, ‘Fuku’ is a seven-minute vision of beautifully blurred romanticism. Over a dramatic fanfare of delicately muted horns, Wagner thinks aloud; “if it’s the last thing we do together.” Hopefully, it won’t be but if Lambchop was to suddenly end right now ‘Fuku’ would be the most majestic of farewells. (Simon Godley)

Why we love it: “Did you know/a thousand flights took off today,” sings anaiis with a reflective and wistful air, soulful and exquisite, vocals cascade down this self-reflective track with sliding guitars and laid backbeats. Here anaiis tells the story of a journey back to herself with the duality of a lullaby of French and drawn out English notes, swelling to a soulful chorus line. Gorgeous.

“I wrote about being okay with not being okay, it’s not always easy to make space for ourselves when we are feeling so very low,” she explains. “When writing this song, I was looking for glimpses of solace whilst searching for ways to see beyond the confines of my thoughts and to find the little crack where I felt I had choice again.” anaiis deals with themes of duality, loss of clarity, isolation and anxiety are all felt in a powerful visceral way. Through the depths of darkness, the artist is offering hope that healing is possible after finding the tools to regain control.(Bill Cummings)