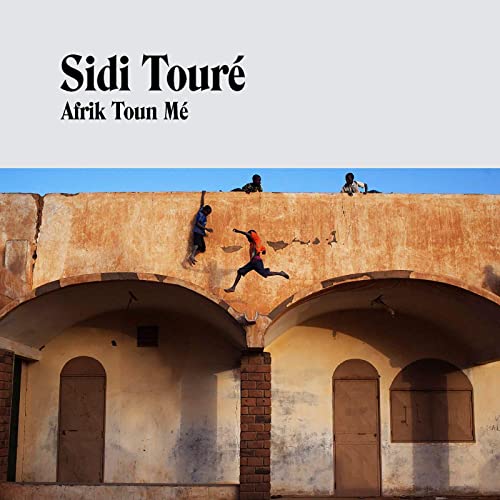 The beauty of a recording like Afrik Toun Mé, the newest from Malian singer and guitarist Sidi Touré, is that you don’t have to understand a word to feel the full impact. Touré’s melodious vocalizing, the intoxicating polyrhythms and swirling guitar melodies (Touré is augmented by second guitarist Mamadou Kelly), and the exotic percussion elements (from calabash master Boubou Diallo), lure you in effortlessly. The all-acoustic recording—its title translates to “Africa Must Unite”—was made during the same sessions that produced its full-band predecessor, Toubalbero, and is sung entirely in the local Songhaï dialect. You can take it all in never knowing that its eight songs, in juxtaposition to the lightness and minimalism of the music, call for a greater reliance on science and technology in the developing African nations. But at the same time, that awareness, an appreciation for what was on Touré’s mind when he cut these songs, gives Afrik Toun Mé that much more resonance. One highlight, “Tchaw Yan,” addresses the progress that China has made in recent decades as a result of its population’s single-mindedness. It states its case at an easy-going midtempo pace that approximates a particularly warm bluegrass ballad. Other tracks deal with home and family, and the life-changing decisions one must make to protect them. Were one to read translations of Touré’s stories, the heartbreak and hurt would make themselves known alongside the enthusiasm and determination of Touré’s people. That’s all there for the taking, with a little initiative, or you can simply close your eyes, lie back and let the guitars embrace you. Either way, you win. Please enjoy this full-length feature from our Oct/Nov Issue. Relix will donate $5 from each subscription to The Waterwheel Foundation’s Divided Sky Fund