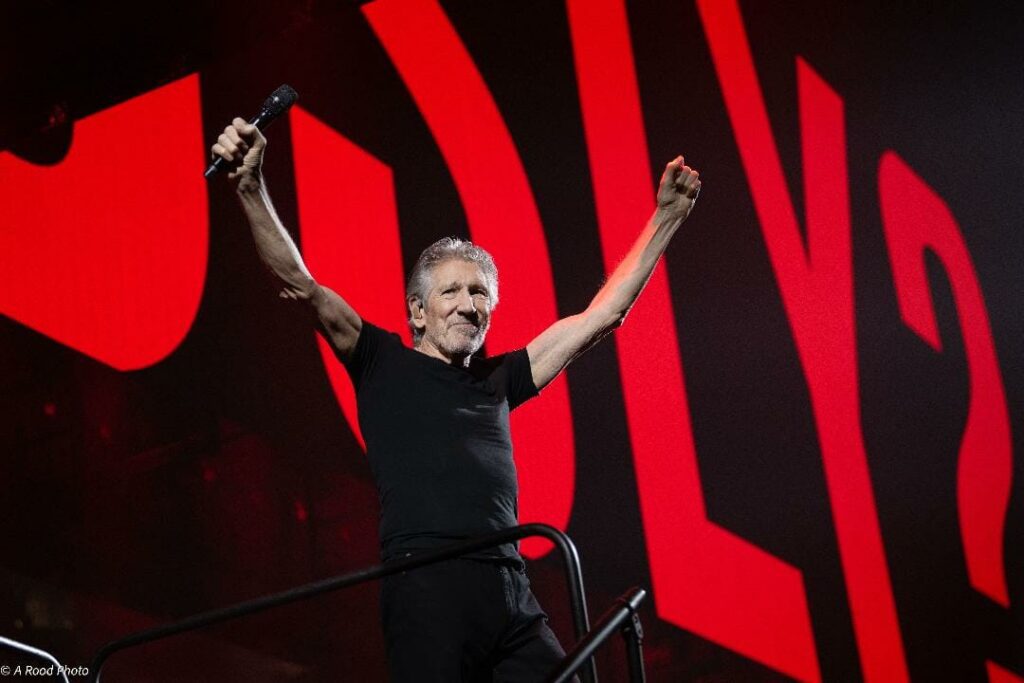 photo credit: Stevo Rood***Roger Waters remains the quintessential provocative rock star.  He’s proudly opinionated and thoughtfully poetic; bold enough to declare his prescience worthy of company with Orwell and Huxley.  He’s also a very fine musician with a visionary perspective imbued into over five decades of songwriting bridging the psychedelia of the late ‘60s with the social, cultural, economic, and political alarm bells of modern times.  And he offers it all in a two-and-a-half-hour extravaganza delivered to arenas filled with tens of thousands each night on his This Is Not A Drill tour.A Waters show is not a relaxed evening out.  Despite the polite chimes and his pre-taped announcements of the remaining minutes before lift-off, it’s anything but a mannerly affair.  There is order, certainly; a programmed concert performed in the round that adheres tightly to coordinated video displayed above Waters and his band of nine.  Too, within the 150 minutes, is an onslaught of attacks to the senses- sometimes pleasant, sometimes disturbing, always stimulating: starkly arresting barrages of reds and blacks; messaging blatant and obtuse; and, of course, the complexity and conscience of Waters’ Pink Floyd catalog and ever-growing solo repertoire.From the shadowy opening of a reimagined “Comfortably Numb,” during which Waters is heard but not seen, to the finale, “Outside the Wall,” that follows a processional of Waters and ensemble to the bowels of the arena- heard, but seen only onscreen- the staggering performance carries an air of crafted spectacle.  It is work to keep up with it all: flashing slogans; personal commentary; world leaders as war criminals; destruction, death, and floating farm animals.  And a precursor suggesting Floyd fans frowning on Waters’ politics should fuck off to the bar.Even if there were such offended beings in the sold-out crowd at the Crypt this Tuesday night, Waters makes it worth the discomfort.  With a top-flight band of pros, the former founding member of Floyd has loaded two sets with recent solo material and plenty of Pink; particularly an outstanding, first-set closing, “Sheep,” highlighting an hour-long half that included “Another Brick In The Wall (Parts 2&3),” “Have A Cigar,” “Shine On You Crazy Diamond (Parts VI-IX),” and an especially poignant “Wish You Were Here,” paralleled with recollections from Waters and vintage photos of his former and wickedly eccentric Floyd mate, the late Syd Barrett, from whom the tour’s title takes its inspiration.As Waters is far too erudite, it’s impossible to imagine that during that quite impressive take on “Sheep” he wasn’t enjoying pushing the irony as he circled the rectangular stage, coaxing each corner of the arena to rise and cheer at the simplest of his hand gestures.  Too, he doubled down on the character, returning after intermission as The Wall’s ruthless power lord, in full regalia, flanked by black-masked guards as a red-eyed pig flew overhead, rooting out the oppressed and indigent, culminating “In The Flesh” with a hail of faux machine-gun fire, and “Run Like Hell” with Chelsea Manning-leaked clips of U.S. drone killings.  And that was just the first ten minutes of the second set.Best of that back half was “Us and Them,” part of a mélange of cuts from The Dark Side of The Moon illuminated by the exceptional work of saxophonist Seamus Blake, and the guitar excellence of Dave Kilminster and Jonathan Wilson; the latter delivering a terrific vocal on the melodically tricky “Money.”  When Waters gathered his players around the piano for last call, and a reprise of “The Bar,” he seemed delighted; appreciative of the love from the LA crowd; indebted to his band for another sparkling performance; and determined to end such a stirring evening with a smile.  Together the ten lapped the stage once more, then exited; their movements tracked on the massive screen.  Walking off in single-file, they gathered in a circle behind a curtain, singing under the seats, arm in arm in harmony for a final hurrah.