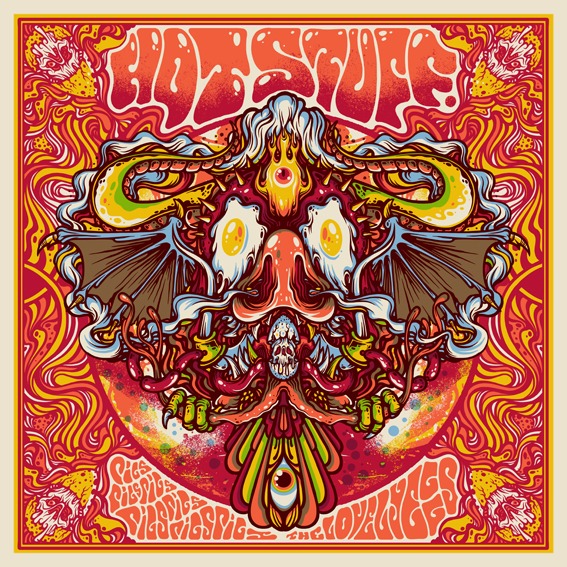 Newcastle’s Pigs Pigs Pigs Pigs Pigs Pigs Pigs are back with their first new music since the release of their third album Viscerals in April of last year. And they have returned with an astonishing interpretation of Donna Summer’s 1979 disco classic ‘Hot Stuff’, complete with some added vocal oomph courtesy of the celebrated Lancaster duo The Lovely Eggs.

As the band’s lead guitarist Adam Ian Sykes explains “When we’re writing we always begin with a single riff, it seems to us that Hot Stuff began life the same way. It’s an untouchable song in a lot of ways but well, here we are… and The Lovely Eggs are just as their name suggests. So easy to work with to boot. They were exactly what we needed.”

All income made from this single is to help raise money for Pop Recs – the record shop, coffee shop, art space and live music venue run by the Sunderland band Frankie & the Heartstrings – and in memory of their drummer Dave Harper who sadly passed away in August of this year. Adam said “Dave was a hero to a lot of people and rightly so, his contributions to music in the northeast were enormous. Pop Recs is such an important place to the area and a legacy that needs and deserves a great deal of support.”

And Pigs Pigs Pigs Pigs Pigs Pigs Pigs are finally able to head out for their Viscerals album release tour some 18 months after it first came out. The Lovely Eggs will be joining them as special guests at their show in Nottingham. The band have also invited Blom, Richard Dawson, Obey Cobra, Kulk and others to join them on various dates on the tour.

Full details of the tour are HERE