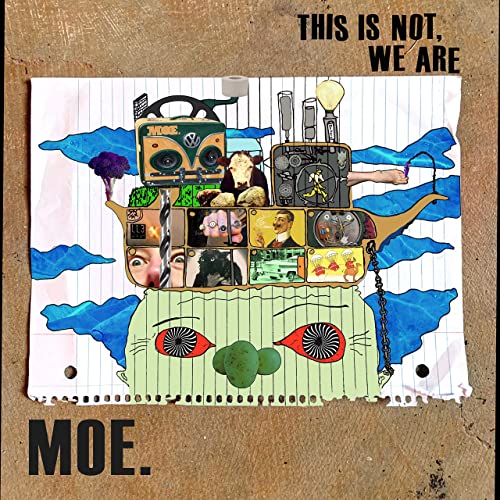 “Before you’re done, you will realize what it takes to stay alive,” bassist Rob Derhak proclaims on moe.’s 12th studio album. “Countdown to the final bell and then you’re forgiven.” Despite the bluesy strut that anchors that lyric on “LL3,” the words still sting: The jam quintet’s co-frontman began treatment for oropharyngeal cancer in 2017, leading to a temporary band hiatus and an uncertain future. moe. unveiled the song upon their live return in 2018, months after doctors deemed the bassist cancer-free. But it takes on an even more celebratory vibe on This Is Not, We Are, their first LP since 2014’s No Guts, No Glory, as Derhak harmonizes with guitarist Al Schnier over a spirited horn section, Vinnie Amico’s tumbling snare rolls and Jim Loughlin’s airy vibraphone melodies. The record was largely workshopped over the band’s post-cancer tours, and there’s a similarly groovy, laid-back quality to most of the material: the Allman Brothers-styled “Crushing,” highlighted by a piercing guitar solo and a layers of percussion; the nostalgic blues-rock of “Skitchin Buffalo,” which finds Derhak dipping down into Frank Zappa-like low notes; and the funky “Along for the Ride,” laced with digital ‘80s tom-tom fills and peaking with a reverb-y guitar climax reminiscent of vintage Pink Floyd. But the album’s centerpiece is the only brand new track: “Undertone,” penned by guitarist Chuck Garvey, builds a rootsy guitar strum, click-clack drums, falsetto leaps and spacey wah-wah leads into a hooky piece that still feels epic at four minutes. The album title feels incomplete: for moe., thankfully, this is not the end.