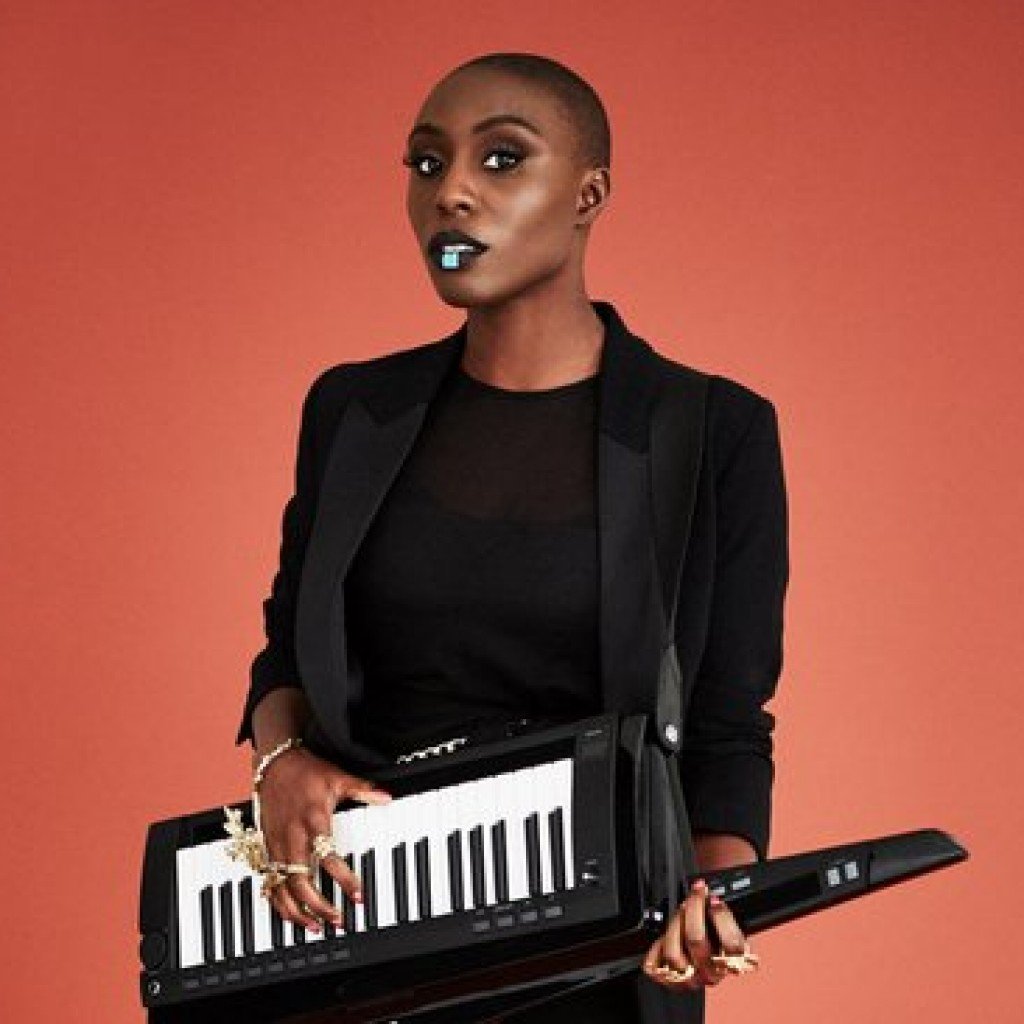 Scribble…BUMP…scribble…BUMP! There’s all sorts of etiquette to trying to write a review. Given that some people – not entirely without reason – don’t like people making notes on their phones whilst attending gigs, your humble scribe still tries to make notes on a pad., with a pen. Of course, whilst it doesn’t mean there’s not a distracting light for other punters, it means that you’re sometimes struggling to get down your observations in darkness, mindful that when you get it home, the ensuing hieroglyphics may be no use to anyone.

The other factor may be that it’s people are desperate to dance. It’s not just the beat of the music, it’s the thump from the audience who don’t care how they look, they want to get up and dance, even if many are worse dancers than yours truly. As the Edinburgh Festival(s) draw(s) to a close, there’s a sense of being edged closer back to normality. Laura Mvula‘s performance is such that whilst we’re reminded by notices to sit down, this is music made for the dancefloor. Last month’s album, Pink Noise, is her third studio recording and unquestionably the finest album she’s made so far.

Armed with a massive ’80s hand held synthesizer (or keytar), which in keeping with the album title is pink, Ms. Mvula walks on stage to a massive cheer. As with the aforementioned album, she opens with ‘Safe Passage.’ It’s a perfectly placed opener, on record and live. Within a few songs, I’m realising that Pink Garden is moving fast up my list of albums of the year. Jeez, these songs really are that good. She gives us a brilliant ‘Conditional‘ as well as ‘Remedy‘ which my notes in the cold light of day show I have written ‘is this the track of the year?’

It was obvious when she first appeared that she was talented, and its more that she is continuing to deliver on that promise. What is it that makes her music so fresh, so appealing? My theory is that she channels over sixty years of soul and funk and whatever period she might represent on a particular track, it feels fresh. Tonight’s gig seems to channel prime Prince and the entire damn Jackson family, as if produced by Quincy Jones and Jam & Lewis, yet it never feels like a throwback, too lost on her own influences.

It begs the question; when she’s this damn good, why is she not playing bigger places? Perhaps some of this is due to current restrictions on attendance, but she deserves to be playing enormodomes. She truly has the chops to pull it off. When she plays ‘Green Garden‘ from her debut album, 2013’s Sing To the Moon, it’s a surprise to discover that this is the only hit single she’s ever had. This is nothing to do with her, and hopefully this can be rectified soon. ‘Green Garden’ by the way, in its 2021 guise is funkier than you ever thought it might be.

On reflection after the gig, I realise that she and her band put on an amazing show that’s so entertaining to watch, and apart from the banner, there’s nothing else on the stage. The crowd may not be rushing down the front, but they’re on their feet, watching a show that is not simply a bunch of session players put together. She jokes about the five hundred year journey that there’s been since the release of Sing To the Moon, and explains that even though she’s not found love, she has written some love songs.

It’s a very happy crowd that walks out. Autumn feels like it may be on the way, but the glow inside dispels it. Laura Mvula is a unique talent, and it’s time she became a household name.