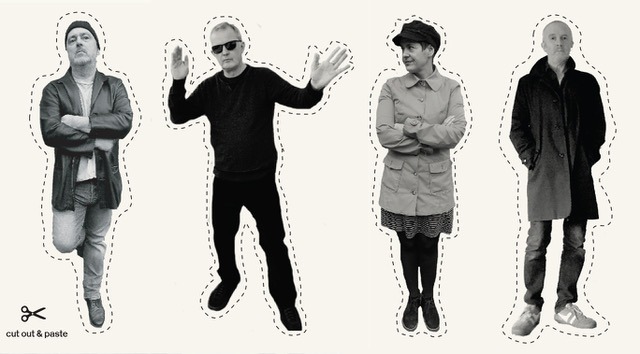 Swansea Sound the band that includes Hue Williams of legendary indie band The Pooh Sticks, along with Amelia Fletcher and Rob Pursey of equally notorious indie band Heavenly, release a new single also entitled ‘Swansea Sound’ tomorrow and we are debuting both versions below.

The song is sung from the point of view of a DJ going in for their last day of work at the old radio station.  It is dedicated to individuals who have suffered as the result of corporate takeover and associated ‘rationalisation’, and to communities whose environments have been captured and made bland. The single includes versions of the song in English (with male vocals) and Welsh (with female vocals), The lead vocal on the Welsh version is by Catrin Saran James.

‘Swansea Sound’ is the fourth Swansea Sound single.  The first, ‘Corporate Indie Band’, was released on cassette. The second, ‘I Sold My Soul on eBay’ was auctioned as a lathe-cut 7” on eBay. It sold for £400. The third, ‘Indies of the World’ was released as a conventional 7” and made it to no.10 in the UK physical singles chart.

‘Swansea Sound’ will be released on mini-CD by Lavender Sweep Records; on cassette and digitally by Skep Wax Records.

The cassettes and mini-CDs will be hand-numbered.  There will be a prize draw where the lucky owners of one cassette and one mini-CD will win a free copy of the album.  The members of the band will record a special online radio programme.