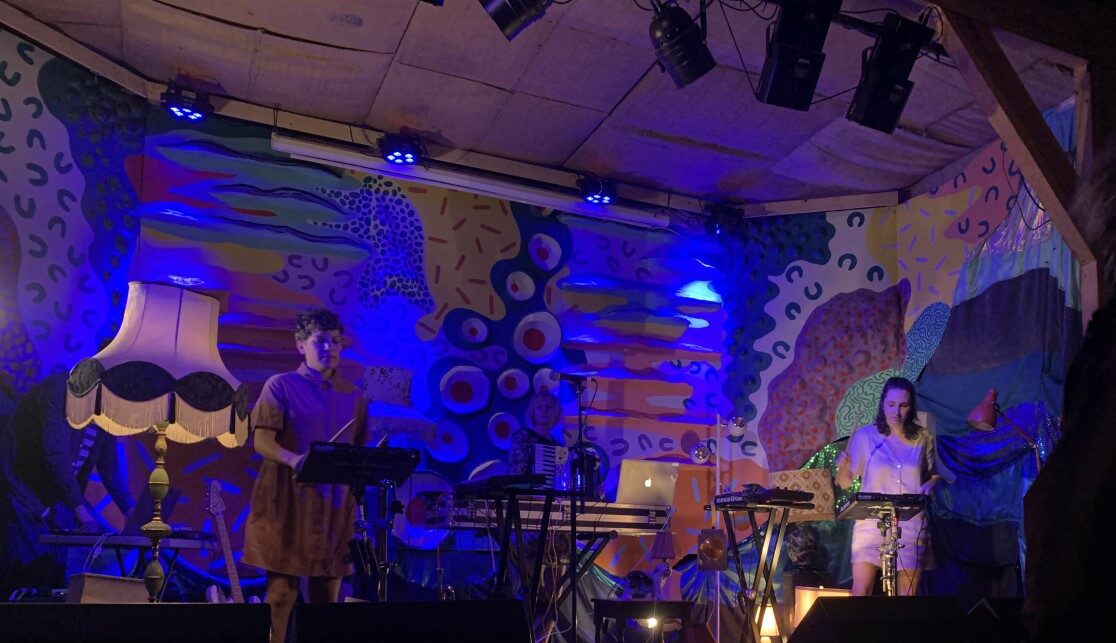 For optimum results, the night before you go to see Haiku Salut, you should retreat deep into an ancient wood, to experience the steady drumming of rain on what remains of the dilapidated roof of your lonely, ruined house. There, shunned by the villagers, you can reflect on vague memories of a sunlit autumn and dream of things that cannot be told in the words of men. They don’t sound anything like that obviously, this would only be to prepare yourself to get the full effect.

It’s the first night of the tour to support Haiku Salut’s new LP, The Hill, The Light, The Ghost, and we’re in The Jam Jar in Bristol. The band have brought their famous light show with them, but are a bit upstaged by, er, the stage. It’s a proper Alan’s Psychedelic Climbing Wall of a backdrop, all swirling luminous shapes, many-angled eyeballs and protuberant paper mache mouldings. This gaudiness is hardly conducive to the summoning of ghosts, and cut free from the album’s monochromatic simplicity, they sound disconcerted by tonight’s context. Day one on the road and they’re already pushed out of their comfort zone. It’s no bad thing actually.

There have been a few changes since I last saw this band, but they’ve held on to a certain sense that some kind of great storm has just taken place offstage but here we are, a breeze is playing in the treetops, everything feels alive, the light is clear and we are none the worse for our adventures. Brave new world and all that. Onwards.

Two things come across incredibly clearly in the live setting. Firstly, the field recordings. Much of The Hill, The Light, The Ghost is built around things they found in Sophie Barkerwood’s Tascam diary, the sounds she’s accrued on their travels – a bar from a Murakami novel, a derelict house, birdsong. Here you can completely immerse yourself in these sounds, feel them all around you, feel the wind in your hair as it were. Unidentified skittering and clicking sounds animate the overdressed venue. Skylarks chatter at the bar.

The other thing, and it’s a bit of a revelation, is the extent to which Gemma Barkerwood’s guitar is such a key component of the band at the moment. She plays electric guitar in a classical style, through a combination of pedals that give it a ghostly languor. It’s unobtrusive, almost ambient, but always there, occasionally crystalising into a more explicit statement of guitar-ness. It’s a noises-in-space thing, the fullness of it on a PA in a smallish room. You won’t get this at home.

If the ghosts are a little shy at The Jam Jar, Richard Brautigan’s cybernetic ecology certainly is not. He’s there at the bar with the skylarks, in spirit, in a funny hat. He wipes craft ale off that moustache of his and smiles as the band play ‘All Watched Over by Machines of Loving Grace‘. Gemma’s guitar sounds a bit like Brautigan’s smile – wry, not quite understanding his own jokes, self-deprecatingly regarding the deer and the squirrels as they nuzzle among Haiku Salut’s bleeps and loops. It builds and builds and drops away.

The set doesn’t go perfectly – ‘The More and Moreness’ doesn’t quite hit the precise levels of choreography it requires and an out-of-tune guitar hilariously disrupts the encore, but the band hold it together with some aplomb. There’s a precious moment of silent comedy as Sophie has to hand the guitar to Gemma to retune and if you weren’t watching you would hardly notice – it’s a further opportunity to indulge yourself with the birdsong.

Anyway, it seems like they’ve moved on from the more elaborate pleasures of their earlier material and are now far more at home in the looser, more contemplative pieces. ‘Pattern Thinker’ in particular seems more exploratory, even improvised. They should give themselves this kind of wider canvas more often – it’s more conversational and freed of the relative tightness of the shorter pieces, it takes them to a different dimension.

Despite a few minor stumbles then, Haiku Salut remain a unique presence, able to convey things that few other bands are perceptive enough to grasp, let alone articulate – the difficulty of nostalgia, the ambivalence of our relationship to nature. Theirs is a gentle but implacable power, electronica shorn of its usual cliches – as if Kraftwerk had never happened. Unmissable as always.