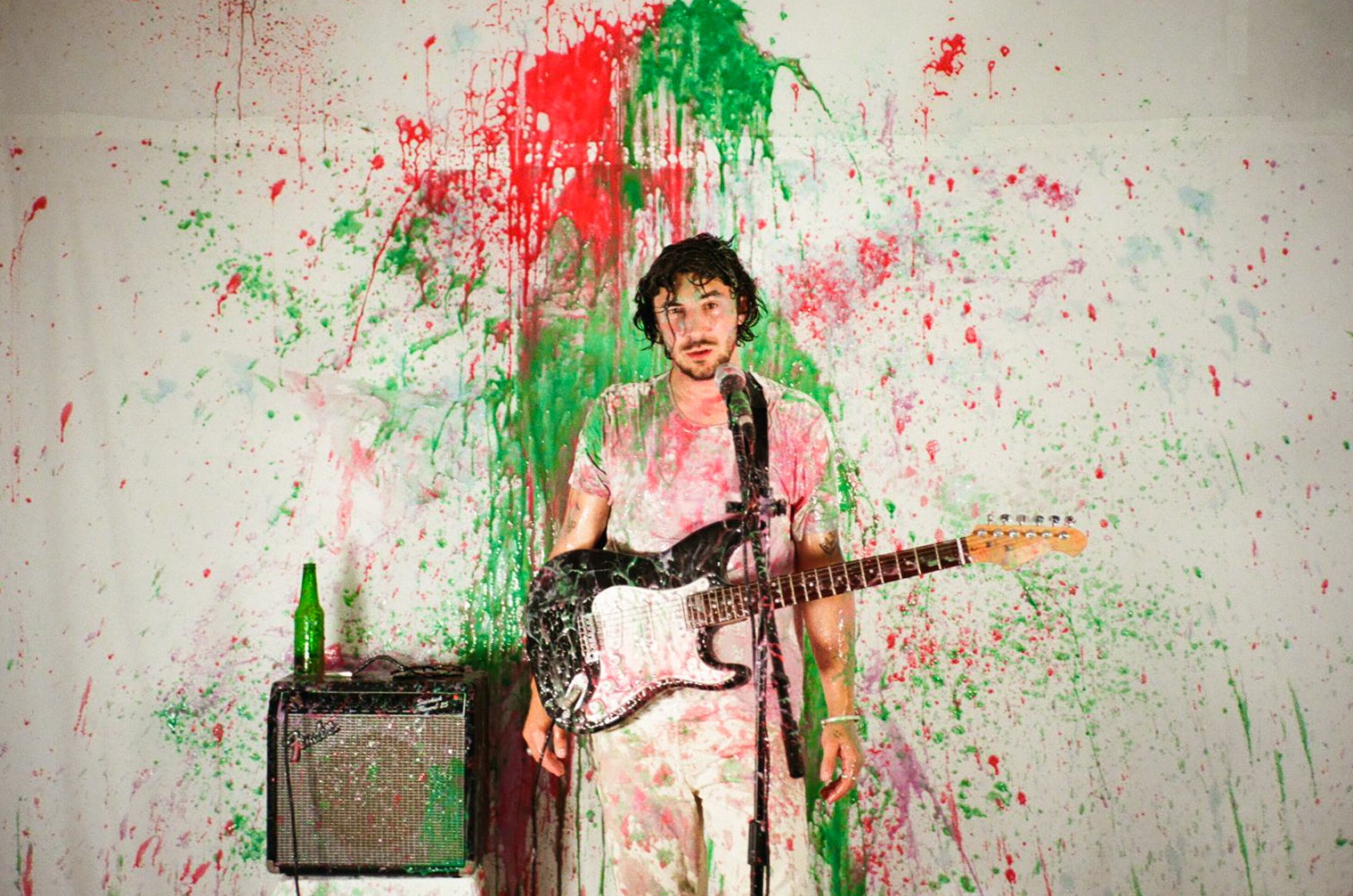 Jaws The Shark is on Nice Swan Records and has released six singles to date:  ‘Mission Impossible‘, ‘Andy Gray‘, ‘Demon Dream‘, ‘Loose Change‘, ‘Erase Myself‘ and current single ‘Cold Feet‘.  A multi-instrumentalist producing garage rock with energetic hooks I caught with Jaws the Shark to ask more about the song-writing, playing live, plans for new music, and of course, where did the band name come from!

Welcome Olly Bailey aka Jaws The Shark!
How did Jaws The Shark come to be? And I have to ask, how did you decide on the name?
Jaws The Shark came to be because of the pandemic!  I had been working with other bands and musicians for a while as a Tour Manager, I was due to start a long US tour in April 2020, then the pandemic hit and that then didn’t happen.  I moved back to my mum’s place in the countryside down in Devon because I didn’t want to be stuck in my pokey little London flat for God knows how long.  I’d always been a musician and started my first band when I was 17, so it’s always been in me. I bought some recording equipment and just thrashed out a load of song ideas I’d had inside me for a while.  And I haven’t stopped since.

The name comes from an episode of the TV show Peep Show!  There’s a scene where Jez keeps saying Jaws The Shark.  I’m a massive shark nerd anyway and I just happened to be watching that episode when I was trying to decide on a band name.  Before that I was going to call it it ‘Chum’.  Which is still vaguely shark related anyway!

In the current music landscape packed with post-punk bands, Jaws The Shark is very different.
It is a solo project, but do you envisage collaborating especially considering playing gigs, or do you want to remain as a solo project for the moment?
I never really envisioned that it would be a solo project to be honest!  I wanted to make music that sounded like a band, and I wanted people to think it was.  I would like to expand it gradually over time.  I play live as a two piece at the moment, so with me and a drummer, which is cool and I enjoy that.  The only real reason I don’t have more members is because I can’t afford to have more at the moment!  If I’m being honest.

How did you get signed by Nice Swan Records?
(labelmates include Pip Blom, Sports Team, Sprints, Hallan)
Pete and Alex from Nice Swan got in touch with me through a friend of mine (Elliot Rawson), that used to be the drummer in a band called YAK. Elliot was drumming with me at the time and I guess they saw he was playing with me and listened to some of my tracks that i’d self-released and posted online. And the rest is history really! They initially took me on for 1 single release as part of their singles club thing and it then progressed onto an EP, which is out next year.

What is the main inspiration for your song-writing?
I’m not sure there really is any one particular inspiration to be honest! I can get inspired from the smallest of things. I was sat on a bus the other day and it made a beep kind of sound and even that sparked off a whole track in my head, which I then hummed the melody for into my phone and then went home and wrote it. It’s actually a banger as well!

You have done a few festival shows.  Am I right in thinking they are the first gigs for Jaws The Shark?
Some of the first yeah! I mean I only really have been able to play proper fully attended shows since July and all the restrictions were lifted. I’ve been lucky that i’ve had quite a few booking since then and also a little support tour with The Wytches that i’ve just got back from. So yeah it’s been a busy few months, which i’ve loved.

And how has it been playing in front of a live audience?  How are preparations going for your own headline dates in Feb 2022?
It’s been a lot of fun. I think anyone that has seen my live shows will tell you that they’re full of energy and just a lot of fun. I don’t care if there are 10 people or 10,000, i’ll still give every show the same level of energy and just try to create a fun environment.

Prep for the headline tour is going well, it’s amazing to me that i only started this thing little over a year ago and in the middle of a pandemic and now I’m doing my own headline tour!

What is next music wise?  With six singles released to date (‘Mission Impossible‘, ‘Andy Gray‘, ‘Demon Dream‘, ‘Loose Change‘, ‘Erase Myself‘ and ‘Cold Feet‘) are there plans for an EP early in 2022?
Yep! There’s a EP dropping early next year.  I’m already planning my next recording sessions for the follow up to that as we speak! I’m quite lucky in that I enjoy writing a lot and frequently, so there is always new stuff that I want to get recording and putting out.  Plenty more to come and I’m really excited about it.

If I looked in your fridge right now what would I find?
I actually just went and checked!  It’s carnage in there.  There are some Wispa chocolate mousse things, a can of Grolsch, some Polish mayonnaise, a bit of cheese and some pickles.  I’m ashamed of myself.