Interview: Winona Oak Talks “Piano In The Sky” & ‘SHE’ EP 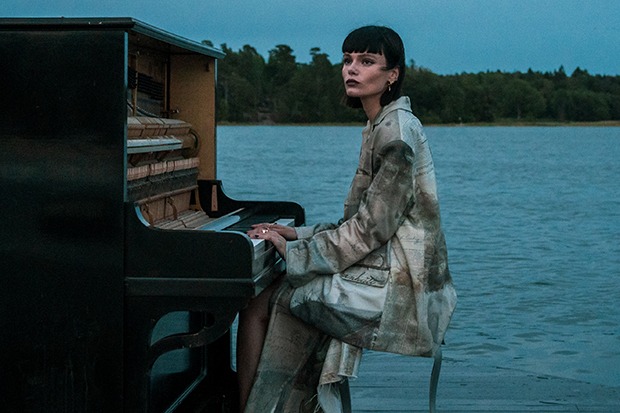 Winona Oak has already released one of the best EPs of 2020, the staggeringly-great CLOSURE, but, by the end of October, she hopes to make it two. The Swedish pop artist is rolling out a second EP called SHE on October 23, which contains recent single “With Myself” and the just-released (and completely gorgeous) “Piano In The Sky.” The breakout star’s latest anthem is a stunning ballad about longing — complete with a cinematic visual that finds Winona perched atop a battered piano in the middle of a grey, wintery lake.

I recently spoke with the 25-year-old about her “Piano In The Sky” and its accompanying video (exposure to the elements made her quite ill) as well as her upcoming SHE EP. Winona describes her new project as bolder and angrier than CLOSURE, which she puts down to being a little older and wiser. Other topics of conversation included making music in quarantine, her upcoming debut album and the songs she has been listening to in 2020. Get to know the Sweden’s next big pop export a little better in our Q&A below.

I heard that you got a little bit sick while filming the video for “Piano In The Sky.”

Yes I did, I got so cold. It was just shitty, Swedish weather. I didn’t have any shoes or anything. I was just barefoot on the water. I think that’s when I got sick, but I’m feeling better now.

People keep telling me that it’s good that you sacrificed yourself for the art and I’m like, “Yes.” I’m happy it turned out so fucking great, it’s worth it. [Laughs]. It’s been so long since I was this sick. I don’t think I’ve been this sick since I was a kid.

Where did you film it?

It’s outside Stockholm, it’s called Fjallgatan, it’s weird pronouncing it but it’s really beautiful. It has that Nordic Swedish vibe to it, it’s just so beautiful.

It’s lovely. What inspired the song?

I actually based the song on a dream that I had. I had a dream where I could hear a piano playing up above the clouds. I tried to find it and I was just climbing up, but I couldn’t reach it. Then the morning after, I went to a recording studio in Venice, CA and wrote “Piano In The Sky.” I was pretty sad that morning. The piano in the sky represents all the things that we carry in life that we can’t reach. We still hear that little melody in our heads and we carry it with us, but we can’t reach it. You know what I mean?

Is “Piano In The Sky” representative of your new EP?

Yes, it’s going to be on the next EP. The EP is called SHE and it will be a mix of songs. The other song that I’m putting out is called “She.” That is the opposite of “Piano In The Sky.” That one is kind of mad and crazy. That one is just totally different. I love that about the EP. It’s just a mix of all kinds of emotions and important themes like “With Myself.” It’s really important for me just to do such a statement song.

Thank you. It’s on the EP. I wrote that one in Denmark. I remember that I was walking out from the bathroom and [my collaborator] was jamming on this intro. He was doing this gospel intro — it’s actually him singing all the harmonies — so it’s amazing. I heard that and I was like, “I’m thinking about my money.” Then we just were like, “Okay, this is a vibe.”

The video is incredible too. I believe you filmed it in New York?

How would you describe the shift in your sound between CLOSURE and SHE?

Has 2020 has inspired that shift? Everyone is a little bit angry this year?

I don’t think so. I wrote CLOSURE over the last five years. I was just younger. Now, I’m older and I don’t care as much, I’m more brave now. I’m turning 26 in October and I feel like I’m not afraid to speak up for myself and to just talk about all the things that are important. I think that’s why I’m just able to be a little more mad.

You have had such a busy year. Two EPs and collaborations with Robin Schulz and R3HAB. How do you juggle everything?

I ask myself that every day. I have a great team around me, I wouldn’t be able to do anything without them. I think it’s thanks to them.

Have you started thinking about an album?

Yes, I have an album coming out next year actually.

Will it be all-new material or some of your favorite songs from the other projects?

I really want to ask you about making music in 2020. Have you been going into the studio or making music remotely?

It’s so weird. Sweden is very different from LA. In Sweden, if you’re wearing a mask, people are looking at you like you’re crazy. I had a child looking at me today and he was pointing at me and he was asking his dad like, “Why is she looking like that?” Because I don’t think he’s ever seen someone with a mask.

So you can go into the studio in Sweden?

Everything is kind of normal in Sweden. It’s like Coronavirus isn’t a thing here, which is weird because people are still dying. I don’t know what the future holds, if Sweden made the wrong or right decision. I think it’s good to be able to actually do music videos or be creative and go to the studio and do stuff like that. Sweden is also such a privileged and small country, so I think they can afford to have this kind of approach.

Do you miss spending time in America?

I was just saying that I love LA and I think it’s really, really sad looking at all the fires and climate change and it feels so real and surreal at the same time. Then I think about all the people that have just lost their jobs. When I was in LA, I could see there’s so many homeless people just living on the streets, so many people that won’t be able to afford healthcare, and it breaks my heart. I just hope that people vote.

What music are you listening to this year?

I feel like I’ve been listening a lot to Norah Jones because I love her. I’ve been listening to Robyn. I love Robyn, I’m a big fan of hers. The whole Honey album… I’m obsessed with her. I don’t know, I don’t think this year has changed my taste in music. I just think that I still listen to the things that I listen to when I’m sad and I still listen to things that I listen to when I’m feeling mad. I do have one song that I was listening to on repeat for a while during quarantine — “The Difference” by Flume.

One last question. Will you be able to perform these songs live at some point?

Yes, of course! But next year. Until then, I’ll just do it virtually. Hopefully, next year we can get back to doing the concerts.

Thank so much. It was a pleasure talking to you.

Thank you so much for your time.