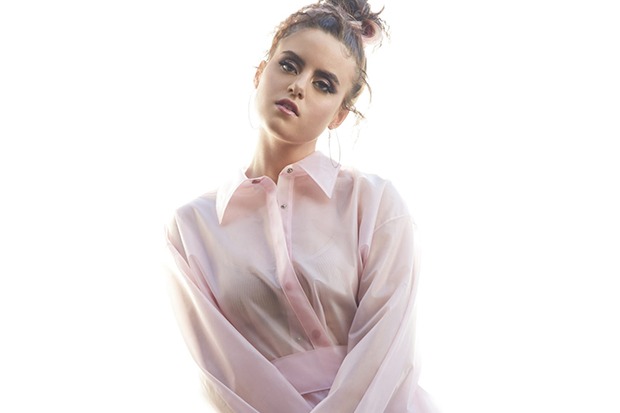 It’s hard enough for an established artist to followup a hit as huge and impactful (every New Music Friday brings another round of imitations) as “Gold,” let alone a complete newcomer. But that’s the situation Kiiara found herself in when her debut single went nuclear in 2015. Instead of succumbing to the pressure, the 25-year-old decided to push herself even harder — taking the next five years to piece together her long-awaited and very, very good debut album, lil kiiwi (out now).

I recently fired off some questions to Kiiara about her impressive debut album and the immense personal challenges she has overcome to bring it to fans. The Princess of Chop Pop also talked about the burden of “Gold,” her studio nickname and album highlights like “I Still Do,” “Accidental” and “Brightside.” Kiiara also opened up about creating music in 2020 (she has learned how to record her own vocals) and the passing of good friend Chester Bennington. Catch up with the breakout star in our Q&A below.

Congratulations on the album. It’s been a long time coming, how does it feel to have it out in the world?

It feels incredible and it’s a big relief. My debut album is finally ready to be heard! It’s nerve-racking because I’ve never been this vulnerable and transparent at all in my career. I couldn’t be happier though. I am so grateful to share this project with my fans. It’s taken five years, and I apologize for that, but I wanted to make sure I told my story the right way, so thank you for being so patient with me. Welcome to the world of lil kiiwi!

There are songs stretching back to 2015, making the album something of a greatest hits. It feels like a snapshot of your journey to date. Was that the goal?

The purpose of this album is to bring people into the world of lil kiiwi. Early in my career up until now I was very closed off and never really opened up to anyone. I didn’t know who I was, so how was I supposed to let anyone get to know me? lil kiiwi isn’t an alter ego. It’s more a side of me that will always be there but is a little more tucked away now. lil kiiwi is who I was early in my career. With this album I want to bring my fans into that era and let them get to know that side of me and understand me better.

Does the nickname lil kiiwi still represent you?

The nickname lil kiiwi still represents me, but not completely. lil kiiwi is the reckless, unpredictable, uncommitted, indecisive side of me that will always be there, but is a little more under control now.

You took a little hiatus in 2019. What prompted that?

I did take a bit of a break to spend time with my family. Right as I was going on tour in October of 2018, my mom was diagnosed with stage 4 colon cancer. She waited to tell me until after I got off tour because she wanted me to stay focused. That’s just the type of person she is. She’s strong, generous, kind, caring, and always puts others before herself. When she told me her diagnosis, I had a difficult time processing it.

I was caught off guard and I felt like my world was crumbling into pieces. It was one thing after another. I was still grieving the loss of Chester Bennington and this news brought me right back to square one. It was nonstop tears over here. I still cry almost every day. So, most of 2019 and this past year I took a step back and have been spending time with my family.

In an interview you said that the passing of Chester sparked some major life changes.

Prior to that I had been self-medicating to the point where I almost overdosed a couple times. I took a handful of anti-anxiety medication one night because I read an article that someone had mentioned me in and what they wrote about me really triggered me. I was hurt and severely depressed and it took me over the edge. Another time I was in the studio and when my team walked in I was laying on the floor, clammy and out of it.

I was also struggling with an eating disorder on top of everything. When Chester passed away it was a wake up call for me. I had a lot of regret for the way I had acted and for not being completely present and was like, “Wow, I need to get my shit together.” So, I started working with a trainer and from there started working with a nutritionist as well. I had been under eating and he taught me how to nourish my body so I’d have energy and less mood swings.

“I Still Do” is one of the catchiest pop songs of the year for me. What inspired that bop?

Thank you so much! “I Still Do” was inspired by looking back on past relationships and wondering… why do I still have love for this person despite the circumstances? I’ve come to realize and accept that that’s just the kind of person I am. Once I really start to care, I always will. To this day when I find myself asking, “How come I still do?” I just think I’d rather care and want the best for someone as opposed to being passive and petty about how things turned out.

Is “So Sick” the next single? How did that collaboration with blackbear come about?

Yes! “So Sick” is the next single. That collaboration was so simple. There was no forcing it. It just sort of happened. When the engineer hit playback after I recorded it in the studio, I remember calling my team like, “OMG you know who would sound perfect on this …. blackbear!” I could hear his voice on the song and that’s when I decided to send him this song and see if he was interested. Sure enough, he loved it and he sent back his verse. He is so incredibly talented. I’m grateful we finally had the chance to do a song together. He killed it!

“Accidental” is such a mood. I think we’ve all been an “accidental bitch” at some point or another. What is the story behind that song?

“Accidental” is about me being the absolute fucking worst when this guy showed me nothing but love. He was patient, caring, genuine and liked me for me. He saw me for who I was. He never made me feel like I was too much. He was the perfect man. He could handle my mood swings and when I was with him all of my anxiety went away. He took away all my fears. I wish I would’ve handled my emotions differently. I was just young and overwhelmed by everything going on in my life at the time.

I met him in 2016. My life was chaotic, and I was a mess. I was scared because I really liked him, and those emotions were something I had never felt before. I wasn’t ready. I wish I hadn’t pushed him away. He didn’t deserve to be treated that way. And if I could go back in time and take it all back I would.

“Brightside” is one of my favorites because it’s so gloomy. Do you have an inner goth clambering to get out?

I’d say I’m pretty emo. I don’t know about goth, but I do cry a lot and have a bit of a dark side to me, which you can hear on “Brightside.” I can be coldhearted sometimes even when it’s not my intention.

In retrospect, was it hard to cope with your debut single “Gold” being such a massive hit?

Yes, “Gold” was a bit of a gift and a curse. Everyone created this unrealistic standard in their head and held me to it. I felt like no one wanted to hear any of my other music. It felt like people didn’t even care to listen anymore if the song didn’t feel the way that “Gold” did. People were calling me a one-hit wonder and it really messed with me mentally. I was like, “Wow! Everyone is going to compare every single song I write to ‘Gold’ for my entire career, I may as well put the pen down.’ I thought about creating music under a different name just to break away from the standard and expectation that “Gold” had created for me. I felt like I couldn’t escape the comparison.

How has the hellscape of 2020 impacted your art?

During quarantine I learned how to record my own vocals, so it’s been frustrating yet rewarding because now I have a new skill. So yeah ,this year has definitely affected the way I create music. I’m much more self-sufficient now. I really miss my engineer though. He’s the best and makes my life way easier.

What are you listening to this year to stay sane?