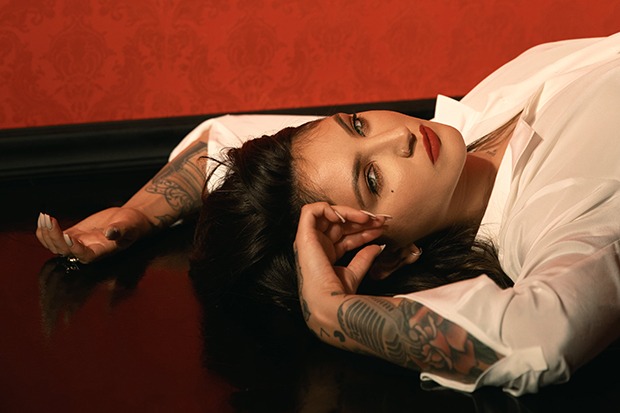 After releasing three perfect EPs and penning a long list of smash hits for other artists, Julia Michaels is finally tinkering away at her debut album. She released “Lie Like This” as the lead single in October and the bubbly banger, which was produced by The Monsters & Strangerz, represents something of a change of pace. For starters, it’s decidedly happy and hopeful. Which aren’t adjectives that you would use to describe most of Julia’s discography. The singer/songwriter puts the shift down to being in love, but doesn’t rule out more anguish in the future.

I recently spoke with the 26-year-old about the inspiration for “Lie Like This” (a romantic comment from boyfriend JP Saxe) and asked for a status report on her long-awaited album (she’s still in the writing process). Other topics of conversation included the massive success of “If The World Was Ending,” creating music in the middle of a pandemic and co-writing Demi Lovato’s politically-charged “Commander In Chief.” Catch up with the budding superstar in our Q&A below.

I wanted to start by saying how much I love “Lie Like This.”

I read that “Lie Like This” was inspired by something romantic that JP said to you. Could you please elaborate on that?

We were laying in bed and I like to sit in front of him, so that I can feel his warm body on my back. I went to Spiderman kiss him. He was like, “You’re pretty upside down.” Then I turned around and he said, “You’re pretty right side up too.” I was like, “I’ll put that in the song.”

Yes. It feels good to be loved by someone who isn’t an asshole. [Laughs].

It must have been nice having such a big hit with him. “If The World Was Ending” took on a life of its own and just kept going and going. It’s a year old now, isn’t it?

Yes, it’s a year old. We recorded it last July and I think we put it out in October. We just loved the song when we did it. We didn’t have any idea that it was going to do what it did. It’s so awesome that it did. It’s conflicting because of the circumstances in which it came, this song, but it’s also beautiful just to see so many people connected to it in a really important time.

You said “Lie Like This” was part of an album. How far along are you with it?

I don’t want to get your hopes up too soon. It’s definitely coming together. I’ve been working with the same team and just becoming more comfortable with that and experimenting every day and trying new things.

Are Monsters & Strangerz collaborating on it with you?

Yes. They’re involved along with John Ryan. I’ve actually known Monsters & Strangerz since I was 17 or 18, something crazy like that. I’ve known them forever. I still have relationships with everybody that I used to work with. Once you’re in my circle, you’re pretty much stuck there.

It seems like you are in a really good place. Is this album going to be more loved-up and happy than the Inner Monologue EPs?

Right now, yes, but I’m a mess and things change all the time. It’s mostly just about doing good and being in this relationship, and enjoying that relationship and being present in that relationship. Sometimes I just notice that my sadness is more tangible than my happiness. I hope people still love me now that I’m not angry [laughs]. It feels really good to just be there and stay there right now.

I love the video for “Lie Like This.” How did you come up with the concept?

I had a wonderful creative director. I always knew I wanted it to have a ’60s, retro theme. I wanted to be a little out of my comfort zone. I feel like I had never done a music video where I’m just wearing tight clothes and dancing around, and being cheeky and fun. That’s exactly what I wanted to do. I feel like we portrayed what we wanted.

How has 2020 impacted the creative process for you? Or are you using Zoom or doing it the old fashioned way?

I refuse to do Zoom. I will not make an album on Zoom, I swear to God. For the most part, I always work with the same people. That’s the best thing about what I’ve been doing with this album. We all quarantine and we trust each other and we feel comfortable being around each other in sessions. We still socially distance, we still wear our masks. At least we get to be together we get to write and we get to have that connection in the room because there’s literally nothing worse than writing a song on Zoom. It’s the most sterile fucking thing you will ever try.

I can’t even imagine.

In addition to working on the album, have you had the chance to do any writing sessions for other artists?

I have which has been really nice. I’m trying to juggle both at the same time, which is interesting in the middle of a pandemic. You don’t show up and be like, “Hey, oh my God. How are you guys?” You show up, you get tested first, you wait, and you hope to God that you’re okay. Then you’re like, “All right, let’s do it.” Then you get away from everybody in a room versus you being with somebody, sitting on the couch, listening to every mumble that they say. It’s a different experience.

You had a co-write on Demi Lovato’s “Commander in Chief.” That’s a very timely record.

Thank you. Yes, this is a very important time for everybody, and this election will determine how our next four years look. Everyone in the room wanted to talk about it. Demi really wanted to do it and we were like, “Great. Let’s go.” I think we wrote it in about an hour and a half and we were like, “All right.” See you guys later. Love you. [Laughs].

Subject-wise, it feels a bit different for you?

Not really. When I care enough about something, I’ll put my pen to it. This is really important. When the Pulse shootings happened, I did a whole charity song for that. When I’m able to and can, then I will. I’m really happy that we were just in that room that day and we all just felt the same way and wanted to write about the same thing.

I love the new song you wrote for Selena Gomez. Is “Boyfriend” one of your favorites?

I don’t want to say that it’s one of my favorites because I don’t want to cheat on other songs that I’ve done. It’s like picking your favorite child. Who does that? I’ve had a lot of very wonderful, favorite songs this year.

Are there going to be features on your album?

Right now, no. I’m working on my album and so far, I don’t have any features. I’m just focusing on the writing process right now and then if I wake up one day and I’m like, “Oh, this person would be great on this,” then I’ll reach out to them. Right now, I’m just doing my album and when I have time to work with people I love on their own stories, then I do it.

Who are you listening to to take the edge off?

It’s been such a pleasure to talk to you finally!

Thank you. I know. I can’t believe it’s finally happening.

Take care and good luck with the album.