Halsey – If I Can’t Have Love, I Want Power (Capitol Records) 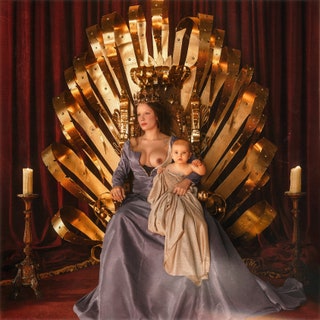 Announced via billboards, the latest Halsey album confronted pop norms and caused minor controversy even before a single note was heard.

The album was able to garner attention without much PR barrage or previews of the sound because of a couple of things. Firstly, Halsey’s fanbase is similar to those that are seen across many pop acts such as Lady Gaga, Ariana Grande or Lorde. The dedication and the analysis of every detail surrounding an artist’s music is now at its absolute peak in an age of lightning fast reaction and hordes of thousands undertaking detective work. Just the title and the news sent the fanbase into a frenzy.

Secondly, the choice of producers. Producers in pop music often used to live in the shadows, not wanting to draw attention away from the spotlight afforded to the artist. However in recent years this has started to change. Producers have become more iconic, whether it’s Max Martin’s prolific touch that has garnered a staggering amount of number ones since the ’90s, or Jack Antanoff of Bleachers having a hand in the works of Taylor Swift, Carly Rae Jepsen and the aforementioned Lorde (who recently spoke out against the sexist notion that she was part of his ‘stable’).

For Halsey’s latest album the producers are Trent Reznor and Atticus Ross. They are double Oscar ‘Best Original Score’ winners (The Social Network & Soul) but also the duo at the helm of the industrial rock band Nine Inch Nails  (Reznor since 1989 and Ross since 2005). This is perhaps where a little controversy started. Whilst it had become old hat for Nine Inch Nails fans to sigh at yet another film soundtrack announcement delaying the next record from the band, this full foray into pop music seemed outrageous. Halsey is maybe best known for their collaboration with The Chainsmokers on ‘Closer‘ (ironically enough with the same title as one of the most famous Nine Inch Nails songs). How could the pair of producers with heavy rock leanings be interested in working with a shiny pop star like Halsey?

The answer for Halsey fans though was obvious. Halsey’s music was steering exactly into the path of Reznor and Ross, especially considering their recent collaborations with Bring Me The Horizon. Tracks ‘¿‘ from this band’s collaborative EP and ‘Experiment On Me‘ from the Birds of Prey soundtrack were definitely a heavier step forward for Halsey and fans came up with a nickname for this sound – ‘Punksey’.

Intrigue mounted for the album is it became clearer that it would be focused around Halsey’s recent pregnancy and birth, with a bold image for the album artwork released of Halsey with their newborn son, sat on a throne with bare breast exposed. The album was released as a whole without any singles alongside an hour-long film shown in cinemas around the world.

If I Can’t Have Love, I Want Power focuses in on what it means to be a mother, as well as a feminine partner (Halsey’s pronouns are ‘she/they’, identifying with both feminine qualities and yet feeling outside of the binary). It addresses the patriarchy and institutional misogyny alongside themes of parenthood with the joys and trauma of having a child. The album was written and set out before being sent to producers Reznor and Ross, so the themes were already in place at least lyrically before the musical tone started to be created. With that tone comes a familiar palette, well trodden by Reznor since his breakout album The Downward Spiral was released in 1994 and honed with his magnum opus The Fragile in 1999. Themes and variations have emerged since, alongside Atticus Ross in albums Hesitation Marks and through soundtrack work for The Social Network, The Girl With The Dragon Tattoo, Watchmen and many others.

Bringing these two elements together certainly must have been a challenge for all parties involved – especially during a pandemic. The distinction between these elements may be the main downside of this album, with a clear difference between music and lyrics. Only a few times do you hear the vocals being affected by the producers (degrading on ‘Easier Than Lying‘ or corrupted on ‘Lilith’) but for the most part the vocal tends to sit atop the riot of sound and colour that Ross & Reznor provide. It doesn’t mean to say that the power and aggression in some of the tracks clashes with the vocal – far from. There is just a pop sheen on Halsey’s voice that sits adjacent to the more distorted (or ‘fucked up’ as Reznor describes it) style of the Nine Inch Nails producers.

Nevertheless, the cohesive product is there. Immediately the album rings out in the style of ‘Hurt‘ by Nine Inch Nails (often performed by Reznor on piano live) with the opening track ‘The Tradition‘ as it introduces the main themes of the album. Detailing ownership and selling of women, it cries out against it with the fantastic appropriation of the phrase “ask for forgiveness / never permission” and later on challenges with “they said that boys were boys / but they were wrong”, beautifully stripping away everything but the voice before bringing the chorus back. The track ends with creeping strings and atmosphere that was so prevalent in The Fragile by Nine Inch Nails – which will do a lot to excite their fans even before they have to find themselves reckoning with enjoying a ‘pop’ record.

A few collaborations with other artists appear on the record too, though only in the music. ‘Bells in Santa Fe‘ features creeping, bleeping, sinister synth programming from The Bug, bassist Pino Palladino appears on grooving quasi-trip-hop track ‘Lilith‘, Dave Sitek of TV on the Radio offers shoegazey guitar on the brooding ‘You asked for this‘, Lindsay Buckingham (Fleetwood Mac) contributes gorgeous fingerpicked guitar on the out-of-place yet so vital ‘Darling‘ midway through the album and even Dave Grohl pops up, drumming on what feels like a very Wolf Alice-inspired ‘honey‘.

Standout tracks on the album include ‘Easier Than Lying‘ which catches you off guard with intriguing drums before snapping into a familiar dirty bassline and then building a full into a cacophony of noise, anger, suspicion and despair. The bridge instantly induces goosebumps, despite its pop repetitiveness (“losing you is easier than lying to myself that you love me”), the build of wailing guitar and crunching bass quickens the pulse before dropping out for a final blast of chorus. ‘Girl is a Gun’ combines sugary sweet pop vocals that come at you with speed over drum & bass backing skittering with forward momentum (provided by Jack Dangers of Meat Beat Manifesto). It’s one of the few tracks where the production team seem to fall fully balanced into one cohesive movement. ‘Whispers‘ circles intimidatingly around bipolar disorder, with impulses and doubt embodied as Halsey whispers “This is the voice in your head that says, “You do not want this” / This is the ache that says, “You do not want him”.

‘You asked for this‘ lets down slightly within the album’s pacing, dipping the fresh energy that strikes out at the start of the record. The sound of How To Destroy Angels-esque (a Reznor/Ross side project alongside vocalist Mariqueen Mandig-Reznor) droning guitars are present whilst the back half of it builds and winds around to redeem it, but with too much repetition and without the immediate grasp in the front end you could easily skip it. ‘Lilith’ despite it’s cool groove drags even in spite of its less than 3 minute run length. ‘1121’ is well crafted, but only serves to continue the message of the album with some very clichéd modern ballad vocals set against blooping electronica.

“I am not a woman, I’m a god” screams “this could be a single” and yet has overtones of resistance and rage. Its refrain that continues “I am not a martyr, I’m a problem / I am not a legend, I’m a fraud” and elicits a comparison to Manic Street Preachers‘ ‘Faster‘ but trades nihilism for empowerment. The pulsing synth lines and snappy drum beats could even be compared to LCD Soundsystem, especially in the latter half of the bridge. It’s full on industrial synth pop, and by the final chorus the thumping beat is locked into your brain. The album about twists into ‘The Lighthouse‘ with possibly the grungiest/darkest sound in the album but oddly evokes a country vocal line (not exactly ‘Old Town Road‘ which funnily enough had an unintentional Reznor/Ross credit). The song has Halsey as a siren, dragging men to the deaths after seducing them with brutally dark imagery: “He’s layin’ in the water, begging God to let him drown  / So I showed him all my teeth and then I laughed out loud.” Reznor appears vocally on the outro of the track as they sing together “and the waves come crashing down” over one descending guitar and then getting drowned out by another one screaming through. ‘Ya’aburnee’ wraps up the album with the title translating to “you bury me” in Arabic. The phrase and the song surrounds either her lover, her child or both and the hope that “darling, you will bury me / before I bury you”

All in all, the album is an effort in breaking convention. It pits heavy industrial droning, drums and despair against a pop star known for huge chart hits. The subject matter requires it though, with a strong feminine voice that is unafraid to share strength and vulnerability hand in hand whilst staying truly powerful. Whilst the efforts have been made however, it still feels like an album of two halves put together. If the trio had sat in one room for the whole experience  -crafting the album from nothing until completion – it could really represent the sound it needed to achieve. Nevertheless, making heaviness both in sound and in tone accessible is what this might achieve, and it’ll be interesting to see how many Halsey fans are at the next Nine Inch Nails show – and maybe vice versa.

If I Can’t Have Love, I Want Power is out now on Capitol Records.