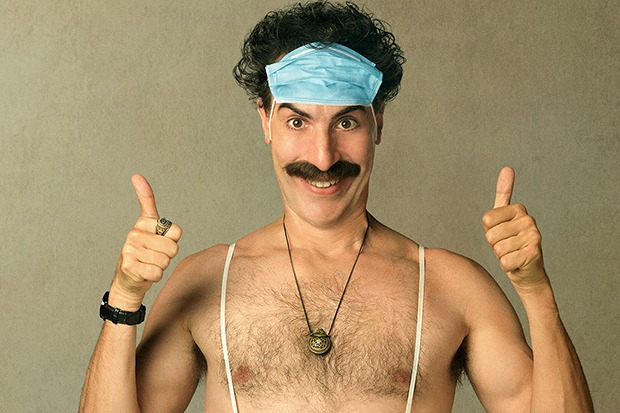 Borat Subsequent Moviefilm, the sequel to 2006’s zeitgeist-capturing blockbuster, is hard to watch. In the best possible way. Sasha Baren Cohen holds a mirror up to modern-day America and the reflection is undeniably ugly. The comedian’s prime target is the GOP, eviscerating individual politicians as well as their policies — particularly in regard to COVID-19 — and their most ardent supporters. If the state of 2020 was any less bleak, Borat Subsequent Moviefilm might have come across as mean-spirited. Now, it just feels necessary.

Never one to get stuck in the weeds, Borat decides to gift his 15-year-old daughter to Pence instead and, as expected, all hell breaks loose. The film is comprised of a series of encounters with everyday Americans, which vary from slightly awkward (faxing dick pics in the local print shop) to extremely painful (the brain-melting scene at the debutante ball in Georgia). At its best, however, Borat Subsequent Moviefilm is laugh-out-loud hilarious while driving a point, or ugly truth, home.

The best example of this is when Tutor swallows a baby-shaped cake decoration and gets taken to a women’s health clinic. Borat explains that he “put the baby inside” his daughter, which doesn’t faze the pastor on call one iota. As the world’s most-famous Kazakh reporter continues to imply incest, the advisor simply calls the (imaginary) pregnancy God’s plan. It’s hard to watch without covering your eyes or pulling out your hair, but it does lead the film’s best payoff as Tutor “gives birth” in a public restroom.

When Borat’s plan to bequeath his daughter to Pence goes astray (he does get unnervingly close to the VP), they decide to target Rudy Giuliani instead. If Borat Subsequent Moviefilm has a true water-cooler moment, it’s Tutor’s on-camera interview with the former mayor of NYC. This encounter truly beggars belief. While there isn’t much of a story to speak of, Sasha Baron Cohen weaves enough pieces together to give his most famous creation a surprising arc and even a splash of humanity.

If the humor in Borat Subsequent Moviefilm sounds crass and sophomoric, it largely is. Until recently, an argument could be made that Borat is something of a comedy relic that should be retired along with the Jackass dudes. But 2020 changed all that. We need someone to stir the pot and make us squirm. The fact that the film occasionally delivers a belly laugh (like Borat trolling an alt-right rally with a Coronavirus sing-along) is just an added bonus. Borat Subsequent Moviefilm arrives on Amazon on October 23.