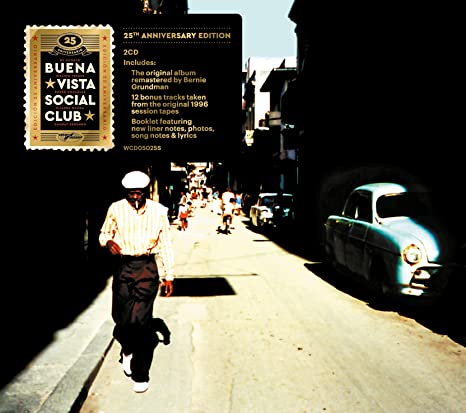 The importance of this album, the self-titled debut from the ad hoc Cuban collective Buena Vista Social Club, recorded in 1996 and released the following year, cannot be overstated: It is the most popular recording of Cuban music in history, opening up the island’s mysterious culture to the West as never before. Cuba, of course, had been off[1]limits to Americans and many other world citizens for decades. But something was happening there. It fell to the American guitarist/ facilitator/producer Ry Cooder and Cuban bandleader Juan de Marcos González to swim through the red tape and assemble the island’s most revered traditional musicians for the recording—made in Havana—that would take the same name that they did. It became an unanticipated success, introducing the very concept of “world music” to millions who’d never considered it, and bringing recognition to such brilliant artists as Ibrahim Ferrer, Compay Segundo, Omara Portuondo, Rubén González and several others outside of Cuba for the first time. The album peaked at No. 80 in the United States, but it was huge in places like Germany (No. 1), Australia and France; 25 years later, the anniversary edition doubles the length of the original, adding a full disc of previously unreleased tracks, including seven alternate takes. Those intimately familiar with the original album may find that the differences range from slight to notable on some of those selections, while more casual fans will be hard[1]pressed to detect any variations; still, it’s nonetheless worth a listen to hear how the improvising musicians went about developing their arrangements. Other tracks on the bonus disc, including “Vicenta” and “La Pluma,” are wholly new to the album, having been excised the first time around, while still others are unfinished works in progress. All in all, it reaffirms that BVSC was, and remains, a crucial contribution to the spread of international music.