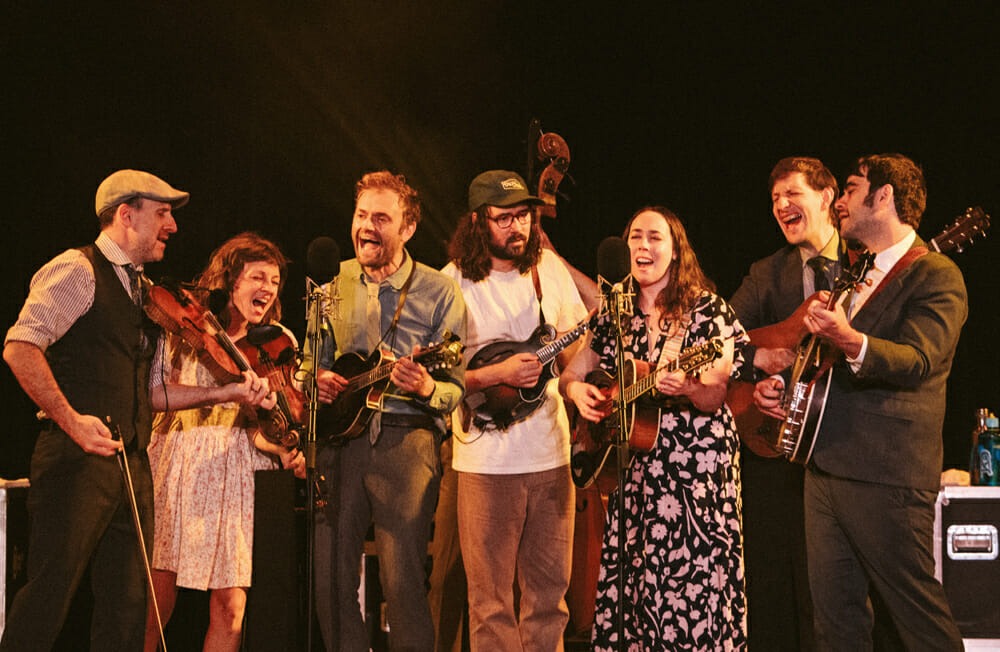 photo credit: Lisa Schaffer***When the Philadelphia Folk Festival finally kicked off on Thursday, August 18 at Old Pool Farm, an hour north of the city, you could sense a collective sigh of relief from the crowd: they’d waited a long, long time for this. 2019 marked the last festival held by Philadelphia Folksong Society — this summer’s 60th incarnation was held up for three years by the pandemic. And once the music started rolling, that deep sigh turned into a full weekend of hooting and hollering — as friends reunited with their longtime fest families to see some of the most exciting acts in global folk music.Daytime sets at the fest were perfect for lounging under a tree or swinging in a hammock to avoid the weekend’s oppressive heat. The side stage lineups were often collaborative — themed showcases of singer-songwriters, creative pairings and a loose, playful feeling that carried out from each stage and into the campgrounds, which served as a veritable playground of music. Indeed, while thousands showed up for the marquee names — the Punch Brothers, Michael Franti, the War and Treaty — many people seemed just as eager to wander around tent to tent and hear faithful renditions of Grateful Dead songs, classic folk singalongs and pure, spontaneous improvisation. The sense of community was pervasive – you couldn’t walk a minute without hearing “Welcome home!” hollered from a tie-dye adorned campsite.But for the sake of this review: the official line-up brought the goods, both from up-and-coming artists and headliners alike.Vermont’s Sarah King dug deep on a side stage Friday afternoon with fiery, vulnerable songs informed by heartbreak and whiskey alike. When she sang, “Only crazy people fall in love with me,” alone onstage with her guitar, an old hippie saw his cue, announcing “Well, I love you!”Crys Matthews — an heir of the American folk tradition if there ever was one — hit hard with powerful anthems about mass shootings, racial justice and the fight for reproductive choice. “They don’t see us, they don’t hear us… ‘til they fear us. Rage is like fire, it’s warm until it’s hot. It’s quiet ‘til it’s not,” she sang in the stunning, unreleased “Sister’s Keeper.”Discovery was everywhere — from stumbling through the woods to find the bright, punchy and potent Latin funk grooves of Mireya, or the sheer number of international acts bringing their own folk traditions to Philly. Finnish stringband Frigg, playing mesmerizing, multi-layered ‘Nord-grass’? Yes, please. Blazingly fast Scottish trio TALISK whipping the crowd into a sunset rave with just a concertina, guitar and fiddle? Obviously, yes.Most astounding was ADG7: a deliciously theatrical Korean act delivering sacred, shamanic music complete with pounding traditional percussion and three frontwomen chopping up their harmonies so precisely that their live vocals sounded like a techno remix. Singer Hong Ok informed the crowd, winking, “We will perform this song singing together to reach the gods — to ensure we finish in triumph!” It was campy as hell, and the crowd ate it up. The band’s fun NPR Tiny Desk just emerged online — but live on the Saturday mainstage their power caught the crowd off-guard, leading to a packed Sunday morning set that sent sleepy trippers right back to outer space.Saturday night’s mainstage was a massive release: pure, electrifying fun from political-rap firebrands Arrested Development and a sunshine-only bounce-around from Michael Franti, in which he invited a few dozen kids onstage to sing with him.But the fest’s most show-stopping set came from American Acoustic, the collaboration between Punch Brothers, Watchhouse and Sarah Jarosz. Between those three acts, there were often a lot of folks onstage, but the performance was incredibly nuanced and gentle — with musicians joining in or stepping back to create energy that rose and fell like one organism breathing. The playing was seamless, different mixes of voices, strings and songs all woven together like a tapestry. The set tapped tunes from all three discographies, with startlingly beautiful covers peppered in.The whole crew leaned in for a hushed, aching take on Sufjan Stevens’ “Mysteries of Love,” bringing people to tears. Neither the musicians nor the crowd was ever all that loud — the whole festival seemed to be huddled close, holding each other, in awe that music could sound so sweet. And everyone was in it together.