We Will Not Forget: The Popjustice Calvin Harris Christmas Countdown 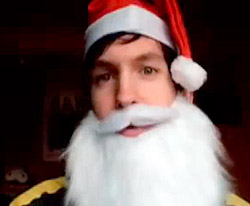 At Christmas time thoughts inev­it­ably turn to those less fortunate than ourselves and it’s hard not to think of all those innocent people who two years ago sat through every install­ment of the now legendary — and illegal in many countries – Popjustice Calvin Harris Christmas Countdown.

It had seemed such an innocent pro­pos­i­tion when, at the end of November 2007, we asked Calvin to deliver us a series of 24 jokes in daily, advebt cal­en­dar­esque bursts of video.

Calvin rose admirably to the challenge and produced a series of clips which we can now see clearly went on to inspire this year’s ‘Jam TV’ so the Christmas Countdown is not without context, nor cultural sig­ni­fic­ance.

Here’s the December 24 entry, which we hope brings back some memories — Calvin’s old haircut, the old
Popjustice logo… Even the subject of the joke screams ‘2007’.

It ended on a bit of a low point, didn’t it.