Lady Gaga interview: “I looked to my past and my faith to find bravery in myself” 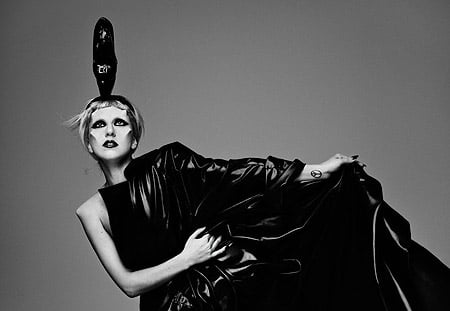 We haven’t mentioned it much over the last couple of years but when all’s said and done we’re pretty keen on the output of Lady Gaga.

In March we went to Las Vegas to interview her and we’re pub­lish­ing some of our interview — 10,000 words of it, in fact — in a limited run a newspaper. (It’s out this week — you can buy it at the bottom of this page.)

We know that not everyone likes things made of paper, so here are some bits and bobs from the interview.

How long should pop songs be?
URGGH!!!! I HATE that! (Pulls face) Well many would say that the perfect pop song should be three minutes and thirty seconds. And that the chorus should come in before the first minute. I, however, don’t believe that.

What do you believe?
I believe the chorus def­in­itely needs to come in before the first minute, if not the first thirty seconds, or before the song even begins as in ‘Bad Romance’. But other than that the chorus should come in quite swiftly without any fuss. But I have also been playing as much as I can on this album without con­strain­ing myself too much by always having the same struc­tures. I don’t want the album to be plastic or boring. I found myself getting a bit bored with my own struc­tur­ing on the Monster Ball. There was and is a formula that I have been using that I’ve used on some songs on this album and not others.

What’s your worst song?
I hate ‘Telephone’. Is that terrible to say? It’s the song I have the most difficult time listening to.

Because it was offered to Britney first?
Well that’s not exactly what happened, but I don’t want to delve into that. I could delve into it if you turn that (motions to recorder) off… But ulti­mately the mix and the process of getting the pro­duc­tion finished was very stressful for me. So when I say it’s my worst song it has nothing to do with the song, just my emotional con­nec­tion to it.

Okay. So which of your actual songs don’t you like? What would you listen to and think, ‘that’s pretty shit’?
What would I like, skip over? Nothing on ‘The Fame Monster’. I think that’s pretty great. ‘The Fame’? I would probably skip over ‘Money Honey’.

In ‘Judas’, what do you mean about being beyond repent­ance?
If you were to compare me with the insti­tu­tion­al­ised idea of what a woman’s supposed to be, I’m already cooked.

What’s the insti­tu­tion­al­ised idea of what a woman is supposed to be? Describe that woman.
I guess we could talk, in the Biblical sense, it’s a woman who’s sub­ser­vi­ent and someone who obeys and does not speak in a high profile way about herself or her work, and does not show any bravery without man next to her. All sorts of things.

Particularly in the UK, it’s expected that all artists, not just female ones, are not exactly apo­lo­getic for what they do, but certainly that they don’t shout about their successes… In America talent is cel­eb­rated in a more carefree way. In the UK if an artist says, ‘my new single is amazing’, there’ll always be someone who says, ‘who’s she to say that? How arrogant’.
Right. I’m just not self deprec­at­ing. I’m really proud of the work and I’m proud of the song. In the video at the end I will be revealed to be Mary Magdelene but you don’t neces­sar­ily know until the end of the video. So I’m actually quite a powerful woman who means a lot to history, but during the video there’s an eyebrow up to what my position really is, what it really means and whether I’m valuable or not.

There’s another song about Mary on the album, isn’t there?
Yes, ‘Bloody Mary’. I’m very fas­cin­ated by her.

Why?
Because when I was young and I went to Catholic school — an all girls school — we were told to pray to God and pray to Jesus, but I always prayed to women. I guess I always wor­shipped a more feminine force in my life and I didn’t view God as having a par­tic­u­lar gender. I always either prayed to Mother Mary or Mary Magdelene, or to my father’s sister Joanne who had died when he was a kid because I viewed her as an angel in the sky in the house of the Kingdom working alongside God. You know, watching over me. It must be so big up there. A lot of people. So I always prayed to women and that’s the thing that I look to now to make me strong in this very unique situation that is being a pop singer. I always pray to Mary and to Joanne. It’s very sad that in those [Biblical] times women were stoned for adultery or for doing inap­pro­pri­ate things. Women were always the target, so I guess I looked to my past and my faith to find bravery in myself. So on this record I thought a lot about my faith and tried to channel a lot of that into myself, and so make myself brave.

So the lyrics are Mary sort of talking… If you listen to the lyrics and the way the cadence goes, the way I’m actually singing, I start quite sweetly then I go into these quite demonic tones, then I come back to sweetness, and then the chorus is me ulti­mately, publicly singing, ‘I won’t cry for you, I won’t crucify the things you do, I won’t cry for you when you’re gone I’ll still be Bloody Mary’. I’ll still bleed, is what I’m trying to say. I guess I’m fas­cin­ated by her — like I said, I wor­shipped women in my religion as a young girl — and in my belief Mary was in it all along. I think she knew what was going to happen. But I also believe that she loved him, and I believe there was a moment when she cried. So she says ‘I won’t cry for you’ but in the rest of the song, in the way that it feels, it’s sad and quite… Dirgic? Is that the right word? Like a death dirge… There’s that kind of quality to it. It’s about me having to be a superstar.

On the basis of the first single it seemed like the album would all be about sexuality and freedom, and ‘Americano’ backs that up to an extent, but of course the other side of the ‘Born This Way’ single was the religious aspect, and the religious side is the one that resonates equally through the album.
Yes. And rites of passage. Even with ‘The Edge Of Glory’ the time of death is seen as being a quite religious exper­i­ence, to a lot of people. There are a lot of things like that on the record. There are also a lot of fun things that have nothing to do with any of that. Shall we do one of those now?

[‘Government Hooker’ is blasted out.]

I had a couple of notes that I made during that which I want to say… Because I, in jest, said ‘let’s play a record that doesn’t address anything spiritual’ before I played that, but actually it has a lot of meaning to all of us in the room. This is spe­cific­ally called ‘Government Hooker’ for a reason and I think the humour in the record is that I’m being told by a machine what to do and I’m happily doing it as long as I can continue to get fucked.

Where were you when you knew you wanted to write a song about that?
We were in New York. White Shadow had this crazy beat then we threw it in the computer and Fernando started making Gregorian pop chants and then I wrote it pretty quickly. I mean I wrote it in fifteen minutes! Actually all the songs on the album were written in fifteen minutes! (Laughs) It’s just the process of putting it all together takes much longer. But the lyrics and the melodies come to me very quickly, and if they don’t I usually move on. But I love that record. Sonically, lyrically, it’s very simple but it has this huge massive meaning.  He says ‘back up and turn around’. Besides it having tonnes of relation to the fact that we allow our Government to con­tinu­ally fuck us over and over again, I think it also makes fun of the plastic popstar. ‘I’m willing to do anything as long as you continue to fuck me and pay me.’ So it’s also a com­ment­ary on pop culture.

How do you want people to take it? As a political song, as something about other popstars? What’s it actually about?
Take it either way, as long as you fuck me and pay me after. That’s kind of the point of the song. The point is I don’t care how you take it.

What should people be calling their senators about now? What are the big issues you think need address­ing?
Right now?

Yes. What are the big issues?
Full equality. They should be calling their senators about allowing people who live in this country, whose families have been here over twenty years, immig­rants being allowed to go to school or into the army. The fact that kids were being taken away from their families in Arizona in the middle of the day randomly because of what Senator McCain was a part of. All the things that are happening are anti-everything America once stood for. (Sarcastically) ‘The land of the free.’ ‘Come in, we have jobs for you, come in and be part of what we do.’ ‘We will give you work, we will help you be free’. And now we’re saying, ‘get the fuck out and give us your money because we’re broke’. I think ‘Government Hooker’ would be an amazing single, I just don’t know if it would get played on the radio at all. I mean, it’s not really a question of who’d play it and who wouldn’t, it’s whether it would get played at all. I would not be inter­ested in censoring it.

What’s the point of this album as a whole?
During ‘The Fame’ and ‘The Fame Monster’ I was incess­antly probed and asked questions. Like, ‘is this the real you?’. And I never knew what to say. I never knew how to answer. I’d go into an overly-intel­li­gent explan­a­tion, or I’d have a defence mechanism where I felt I didn’t know how to answer. Perhaps because the answer was so simple. And the answer was always destined to be: I was born this way. It’s that very simple, over-arching phrase that has really set me free as an artist. It’s set me free of my insec­ur­it­ies as an artist, my insec­ur­it­ies as a person — as a human. I separate artist and human because a lot of other people separate artist and human, but on this album it’s conceived that I am fully an artist and I am fully human. And that is my destiny. It is my destiny to follow my artistic visions to their fullest. I was born this way.

This is just a small portion of the 10,000 word interview we published in May 2011 in a one-off, limited run Lady Gaga newspaper thing.

‘Born This Way’ is out now and here it is on iTunes.